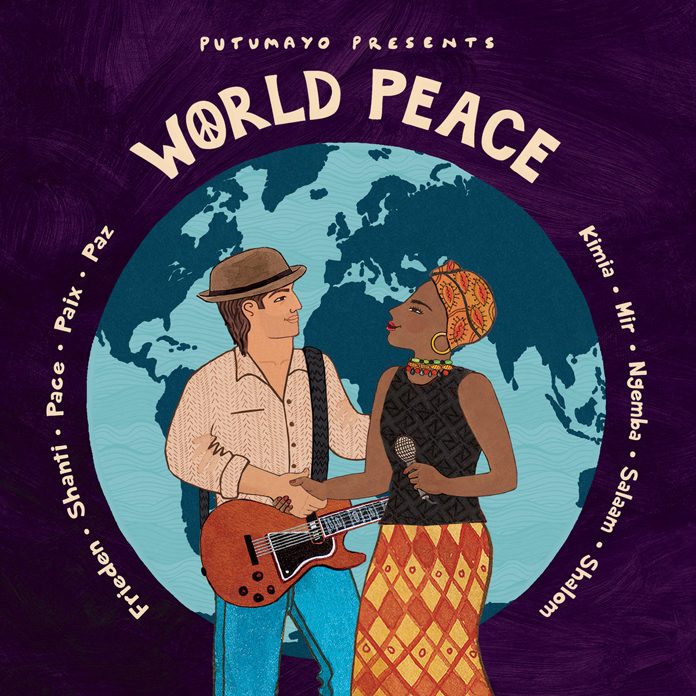 As we (all seven billion of us) spin on our blue, spaceship earth, inexorably into the future, twenty-four hours of the day, three hundred and sixty-five days of the year, our home planet continues to be ravaged by war and other seemingly terminal adversities. And while all of this is happening, Putumayo World Music is thinking – as we all ought to be – about World Peace, which is something that is becoming more urgent by the day but also seemingly something that seems ever out of reach. Somehow it is wholly appropriate then to be reminded of peace through its greatest instrument – music; and that too, through some of the most powerful sentiments and emotions that these songs touch upon and espouse.

This recording, Putumayo Presents World Peace is billed simply as “A celebration of artists and statesmen seeking a more peaceful world”. On the face of it this might seem not simply facetious, but perhaps even a tall order. But then you spin the disc and pay attention as eleven artists and groups of artists sing their way into your sensibilities about simple things that one could do to contribute and it all seems courageous and worth it after all. For instance, Keb’ Mo’ turns the simple act of waking up each day into an anthem entitled “Wake Up Everybody”. The song by Harold Melvin and the Blue Notes somehow becomes so much more urgent than it was when that group first played and sang its simple lyric, calling us to arise by simply focusing on this: “no more backwards thinking/Thinking ahead…The World won’t get no better/We gotta change it, just you and me.”

Bholoja, an artist from Swaziland sings a song that suggests the obvious. His call to “Africa Unite” would appear to be something that anyone, who is concerned with the condition in which we are leaving our planet for future generations, to do just that. India.Arie echoes just that in another powerful anthem, “One”. Hers is a highly expressive performance, more intense than most, though hardly more spiritual – and celebrated – than the great Nina Simone’s as she pleads her plaintive case through “I Wish I Knew How It Would to Be Free”. This extraordinary song shocks with its simple chromaticisms and bluesy sonorities. Miss Simone’s poetry is infused with a sense of nostalgia and melancholy, its fluid melody delicately painted here by her tremulously candid and wistful voice.

Other stellar performances – for there is no other way to describe all of the music on this album – comes from Richard Bona and Michael Brecker who put a brand new spin on Bob Marley’s classic “Redemption Song” who sings in his native dialect while Michael Brecker lets out an elemental wail of his own on tenor saxophone while both artists together reflect on the redemption that could come albeit through the damnation that we seem to have been condemned to. Meanwhile as song after song echoes the theme of “oneness” the incomparable Palestinian/Israeli vocalist and composer Mira Awad draws us into her exploding, crumbling world where she asks that we “Think of Others” even as untold atrocities are being perpetuated upon a people who are quietly bearing the unbearable pain of modern-day apartheid.

This sentiment and emotion is also echoed by the David Broza and Wyclef Jean from the former’s celebrated project “East Jerusalem/West Jerusalem”.  And when all seems lost we are reminded by the utopian anthem by the legendary John Lennon: “Imagine” is performed by the ensemble Playing for Change in a richly constructed version that brings together musicians and harmonies from far flung corners of the earth as artists explore Mr Lennon’s simple lyric. As ever this Putumayo disc is accompanied by a richly referential song-by-song commentary that, together with a characteristically beautiful illustration on the album’s cover, makes for another memorable release from Putumayo World Records.

Performer and Track list – 1: Keb’ Mo’ Wake Up Everybody; 2: Bholoja Africa Unite; 3: Jackson Browne It Is One; 4: Richard Bona & Michael Brecker Redemption Song; 5: Nina Simone I Wish I Knew How It Would Feel to Be Free; 6: Keb’ Mo’ Love Train; 7: India.Arie One; 8: Bongeziwe Mabandla Freedom for Everyone; 9: Mira Awad Think of Others; 10: David Broza & Wyclef Jean East Jerusalem/West Jerusalem; 11: Playing for Change Imagine