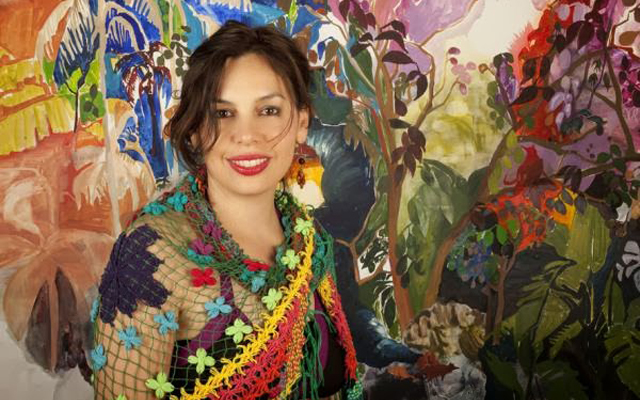 The Puerto Rico-born Cecilia Pahl, who moved to Posadas, Misiones in Argentina, via Cordoba, Spain is now not only a seasoned traveller, but a vocalist, who has traversed a wide musical topography across two continents. Blessed with a smoky contralto, Miss Pahl sings with natural poetic phrasing, drawing you into her songs which, in turn, speak to her in a very personal way. It is because of this that Cecilia Pahl is able to subsume character into narrative and turn anything she touches into musical gold.

Cecilia Pahl reveals herself as an artist of the first order, broadening out from the Spanish-language repertoire to things Argentinean, Peruvian, Uruguayan and Brasilian. Her instrument is luscious, lustrous, precise and feather-light. Her musicianship is fierce as she digs into the expression of each word, brings ceaseless variety to soft dynamics and gives every phrase celestial grace. There is seemingly no repertoire that is out of reach for Miss Pahl and judging by the various traditions that she makes her own on these two albums.

Cecilia Pahl: Corochiré The starting point of Corochiré by Cecilia Pahl is the music of the missionary-poet Ramón Ayala, of whose work little is known outside Latin America and Spain. Each of the songs here is revealed as an imaginative touchstone in Ayala’s life for the next generation of singers to discover. She is accompanied – essentially – by the guitarist Matías Arriazu, pianist Sebastián Macchi, contrabassist Guto Wirtti, Mariano “Tiki” Cantero, an extraordinary percussion colourist and Juan Nuñez on bandoneón; and a string quartet on “Amanecer en Misiones”. Together the ensemble brings a deeply interiorised reading that complements Miss Pahl’s execution. The sweetness of blend among the musicians – especially in “Volver en un cuento” and “El jangadero”, which are works overlaid in transcendent timbres, and they make benchmark recordings. Everywhere, however, Cecilia Pahl and the rest of the artists make this music say something entirely new. By any measure, that’s great music-making.

Cecilia Pahl: Litorâneo This album is glorious. Simply glorious. Its songs float in gentle rhythms reminiscent of little boats bobbing and weaving their across what is suggested by the title of the disc itself. Once again, Cecilia Pahl shows herself not only as a singer of boundless promise, but as a great artist, capable of interpreting almost any kind of music in an incredibly personal way. The disc again shows how versatile Miss Pahl is, especially from “El Suquipuquero” to “Candombé de la Luna en Parche” and everything in between including Guillermo Klein’s “Jazmín’. Again, the sense of belonging to experience and character is evident as Miss Pahl glides from one song to the next. For Cecilia Pahl, the expression comes through the music and shines in her seductive contralto. And always, there is a sense of underlying theme in the recording. So instead of the feeling one often has to keep changing gear randomly every two or three minutes, there is a thread here which makes it a more unified experience of innate beauty.