For two hours (bar a few minutes-break in between) Koerner Hall at The Royal Conservatory in Toronto, Canada was turned into a sanctified church on a brutally cold winter in January. If you had fulfilled your “Sunday duty” to celebrate the Baptism of Jesus on Friday the 13th of January, as a matter of fact, it was “back to church” and then some with the incomparable Damien Sneed, his choral group and trio, backed up for a few works by the Toronto Mass Choir with Director Karen Burke, both singing and later co-conducting in the finale. The evening was A Celebration of Dr. Martin Luther King Jr. entitled We Shall Overcome, one of some forty concerts on a sweeping continental tour. However, despite the deeply troubling times on Planet Earth, the sentiments and prediction expressed in one of Dr King’s favourite hymns seemed not about a great expectation for the imminent future. The atmosphere in Toronto’s most gracefully sculpted venue, in the spectacular acoustics sounding that raised the temperature in the room suggested that we were about, indeed, to overcome.

On January 15th it is his 90th birthday and on January 21st we will celebrate Martin Luther King Day once again. We do undeniably have a long way to go, but not today.

The singers of the Toronto Mass Choir and the vocalists and musicians of Damien Sneed’s ensemble walk onto the darkened stage all dressed predominantly in black … and then Mr Sneed arrives – the silver and gold lamé of his jacket matching that of the great mezzo-soprano Patrice Eaton sitting atop a high chair at sat stage right – both shimmering in the soft yellow light sits purposefully at the piano and tweaks the microphone and a laptop atop the concert grand. The unmistakable sounds of the throngs singing the iconic “We Shall Overcome” crackle through the speakers… and then a familiar voice: 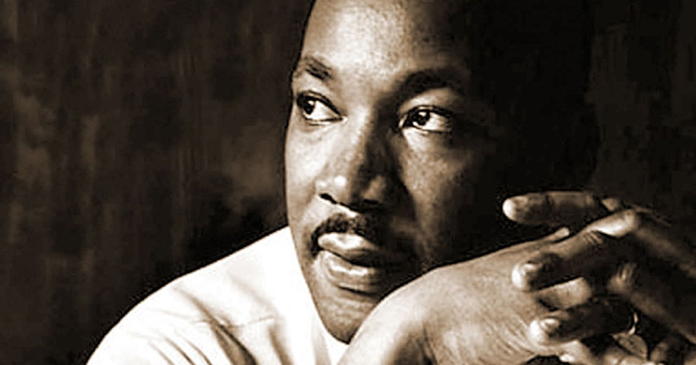 “We shall overcome because Carlyle is right; no lie can live forever.

“We shall overcome because William Cullen Bryant is right; truth crushed to earth will rise again.

“We shall overcome because James Russell Lowell is right

“Truth forever on the scaffold,
wrong forever on the throne.
Yet that scaffold sways the future,
and behind the dim unknown
standeth God, within the shadow,
keeping watch above His own.”

Meanwhile Mr Sneed – whose exalted resumé includes being music director of Aretha Franklin band and a pathbreaking performance as conductor of Wynton Marsalis’ phenomenal work The Abyssinian Mass – weaves his own story into the proceedings. It is time to remember those enslaved, 400 years on and still crying to be set free. We travel first back in time to the Deep South where they picked cotton and harvested corn. And Mr. Sneed begins his history lesson. Just music this time, and yet in the absence of the lyric the words ring loud and clear. Mr Sneed’s hands flash across the keys, fingers caressing and gliding across ebony and ivory. In the trill of triplets; notes like the pitter pater of feet running scared and wild and plaintive; cries of women and children conjured in flatted notes and depressed accidentals; in anguished glissandos and thrilling arpeggios Mr Sneed, right hand flashing and driving up and down the keyboard is educing voices calling the fields as his left hand begins to add smouldering colours… in the thunderous roar of chords roaming down the bass clef evoking the holler of men in chains answering in response: “We shall overcome…”

History is dribbling through this brilliant interplay of light and shadow, darkness and suddenly light as the pianist and music director begins to tell the story of “Oh Freedem”, the African American Spiritual that rang out in the sanctified church where he like thousands like him worshipped and pleaded for the salvific love of God to come down upon the faithful; to set the people free. Then just like that, the concert begins its own Holy Rollin’ as Mr Sneed calls his faithful – his musicians; calls them by name – to sing in praise and worship. By now the temperature – though not yet at feverish pitch – has already been raised up by several degrees. Mr Sneed’s opening segment puts the spotlight on his quartet, which he leads as he moves the music and its historic African American consciousness from the field hollers of the folk blues through the classic blues and then quickly to the Spiritual and Gospel, leaning in towards Jazz – with a classic work from Duke Ellington’s famous Sacred Concert, entitled “Freedom” in keeping with the theme of the evening, of course.

This is followed with an achingly beautiful rendition of a song made famous by the great Billie Holiday, “God Bless the Child” with which Mr Sneed segues into a work from The Abyssinian Mass written by Wynton Marsalis, which he (Mr Sneed) famously conducted the Jazz at Lincoln Center Orchestra and Chorale Le Chateau, recorded live at the Frederick P. Rose Hall in New York City on October 2013 (Blue Engine Records, 2016). The piece is “Everyone Has a Place” and with a voice that glistens and gleams and occasionally rasps like expensive raw silk, Mr Sneed is joined in by the rest of the Chorale and musicians, and the Toronto Mass Choir. Before the spotlight shifts to Patrice Eaton, an opera singer whose luminous mezzo-soprano soars through an African American spiritual as she, indeed bears “Witness” to a redemptive God. This brings to a close the opening segment, The Gathering: Beginning with a Trinitarian-based greeting or seasonal acclamation as if to say “Blessed be God: Father, Son and Holy Spirit. And Blessed be his kingdom, now and forever. Amen” And like a minister offering general absolution he began to call upon his individual vocalists to lead us into the main segment of the evening of Praise and Worship, the likes of which we never imagined we would be part of that night.