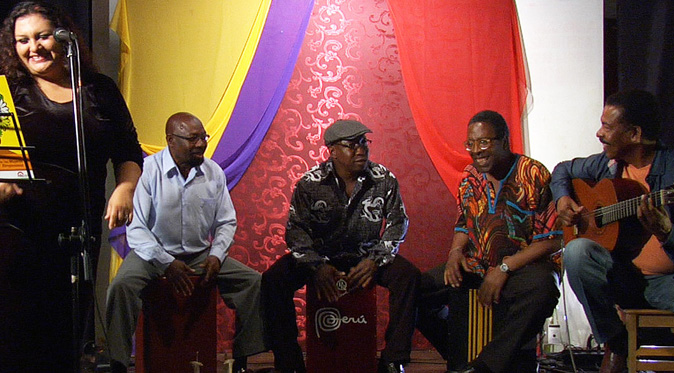 If you are an ethnomusicologist on a quest to study a particular style of music you deep-dive. But every deep-dive demands that you must stay down deep and not need to come up for air for a very long time because the treasures are almost always buried at the bottom and it is never easy to get them to the surface. No one knows this better than Eve A. Ma, an ethnomusicologist and film-maker, who has the passion for and the knowledge of Afro-Peruvian music in spades. And she has completed two remarkable projects – a short documentary and a longer music disc – to prove this.

Both Masters of Rhythm a DVD and Cajón is King may not necessarily be available as a package, but each is a boon companion to the other as the repertoire available on each is somewhat different. More importantly the aural-visual experience is more complete there is the prospect of listening to the masters speak, which is something that enriches the overall experience of both DVD and CD. 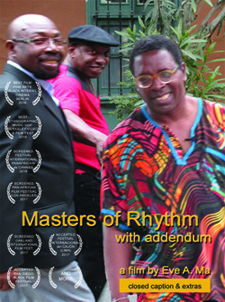 After all, what could be richer than catching a glimpse of and experiencing at least one part of Afro-Peruvian history firsthand; listening to anecdotes from Freddy ‘Huevito’ Lobatón, Lalo Izquierdo and Juan Medrano ‘Cotito’ about how they lived their craft en route to becoming grand masters at their respective games?

But here’s where things begin to unravel for both DVD and CD. Any project relating to an art form with multiple layers of meaning, with a tradition that goes back centuries and features a long line of great practitioners must come with a contextual narrative, copious illustrations and photographs, and – most important of all – for the uninitiated listener (and the cognoscenti) to discern the multitudinous riches of it all beginning from multiple points of departure (Europe and Africa) to an exotic destination (Peru) a virtual road-map is essential. Even David Byrne’s magnificent 1989 film Ile Aiyé (The House of Life) failed to deliver as well as it appeared with no booklet notes too.

But here are two instances where the producers delivered: Rykodisc’s The Discoteca Collection – Missão De Pesquisas Folclóricas and L. H. Corrêa de Azevedo: Music of Ceará and Minas Gerais. Both were shepherded by Dr. Fredric Lieberman and both were produced by Mickey Hart and Alan Jabour. More recently there was an iconic project from the prodigious Welsh percussionist and pedagogue and onetime keyboards player for Boy George, Dr. Amanda Villepastour. This latter one the disc Ilú keké – Transmisión en la eritá meta, which is also companion piece for her brilliant book Ancient Text Messages of the Yorúbá Bàtá Drum – Cracking the Code.

Still, Masters of Rhythm and Cajón is King by Eve A. Ma – even without the de rigueur booklet essay and annotated bibliography and discography – is absolutely nothing to sneer at.

The DVD features extraordinary footage of the three cajón masters, Freddy ‘Huevito’ Lobatón, Lalo Izquierdo and Juan Medrano ‘Cotito’ supported by guitarist Coco Linares. They discuss – always with great humour – how the music was passed on to them, how they took their first tentative steps as percussionists who had inherited the code to communicate not just with members of the Afro-Peruvian musical community, but with the community at large. Eve A. Ma always knows what to ask and has an exquisite sense of timing. She lets the musicians speak, sing, dance and strut their stuff with abandon. The editing is smart and best of all the music is utterly memorable.

The CD is much more exhaustive. It is more than twice the length of the DVD and makes up for the (missing) visual dimension with a treasure chest of songs written in traditional rhythmic forms – festejo, zamacueca, marinera norteña and landó. Plus it features a long audio master class on the performance of the cajón by Lalo Izquierdo and the rhythmic patterns that differentiate one style of music from the other in the celebrated panoply of South American music.

But the best and most important recommendation for importance of this project by Eve A. Ma has been “written” by the music itself and it is imperative that it should be heard in the purity of its natural surroundings, performed by the great torch-bearers of the musical culture itself. Listening to Afro-Peruvian music in its viscerally exciting, almost nude state, without any attempt to fuse it with many styles of music in the USA, Europe and other parts of the world has a majestic charm of its own. And Eve A. Ma has given a classic sense of authenticity to a precious cultural artifact with the DVD Masters of Rhythm and the CD Cajón is King, which, as the legendary Pliny would have us remember that we are being choked with gold.

Masters of Rhythm – a film by Eve A. Ma
Produced by Eve A. Ma
Distributed by Palomino Productions
Length – 27:43