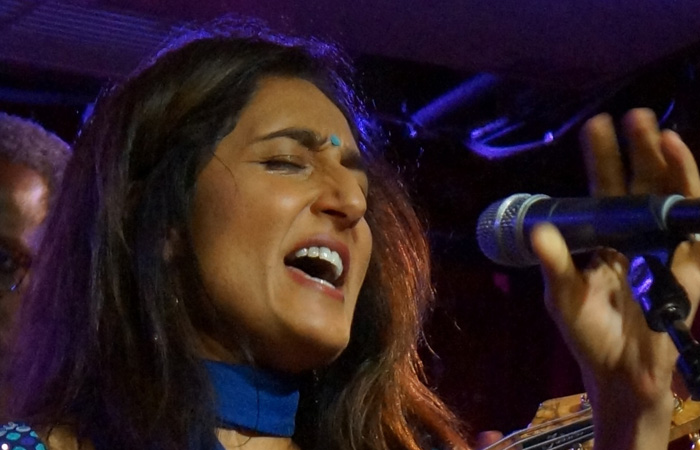 A heady hybrid of Indian grooves, Saharan Blues and Western Jazz that delivers a Blueprint For A Borderless World 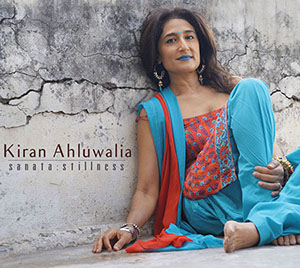 In stillness, movement is not only possible, it is a promise. Indeed, Kiran Ahluwalia’s new offering, Sanata: Stillness, to be released at Koerner Hall October 3rd, is nothing short of a musical roadmap to personal and global transformation.

At once contemplative and rockin’, traditional and innovative, Kiran’s hybrid of Indian and Pakistani grooves, Saharan Blues and Western Jazz shows us that borders are meaningless in one’s heart and on the world stage.

Born in Patna, India, Kiran’s parents survived the strife of political upheaval between India and Pakistan during partition, escaping the riots and warring factions to ultimately settle in Toronto where young Kiran was raised. Living proof that the heart can indeed show us the way, she met NYC-based Pakistani-American guitarist and arranger Rez Abbasi (Downbeat’s “#1 Rising Star Guitarist”) – a musical and marital partnership that transcends place, position, and politics.

“Rez and I would likely not have been able to create together, had our parents not moved from their motherlands to the west. The diaspora is the only social context in which our personal and creative journey would have been able to fully unfold.”

This 2x JUNO award winner’s love of Indian and Pakistani music has grown, merging with multiple global influences with each accomplished release. Rez’s infusion of jazz, alongside her discovery of Malian Tuareg music turned Ahluwalia’s eye from traditional ghazal to fully embrace a more modern sensibility and the guitar-centric brand of desert blues.

Penning the lyrics and music on Sanata-Stillness, Kiran’s themes this time confront the civil war, not within a nation but within ourselves. From the rousing track, “Tamana”, which discards shame and celebrates female sexuality to the sense of isolation felt in “Hayat”, depicting the sensations of being Indo-Canadian and living, now, in New York City, to the chain-breaking release of “Qaza”, Kiran continues her quest towards an adventurous, borderless music of the heart, showcased throughout by her soaring and unforgettably haunting vocals.

Add to the mix such impromptu celebrations of the groove, as in “Hum Dono” (which came about as bassist Rich Brown instigated a Berber-like styling that clicked), the spirited “Jhoom” (joyfully inspired by wine), or “Lament”, a fresh 21st century take on the late legendary Nusrat Fateh Ali Khan’s qawalli, and you have an album of propulsive energy that stirs the soul — a true testament to the power of Stillness.