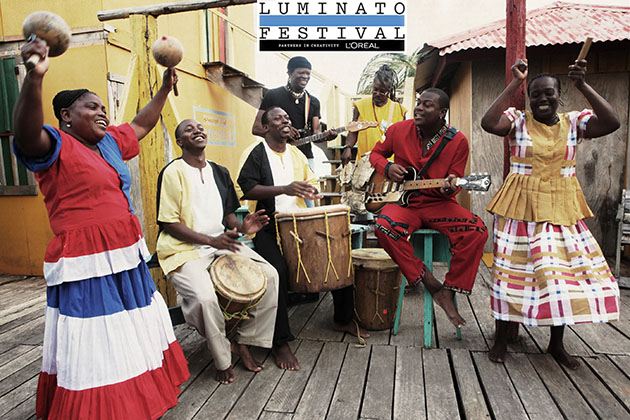 Reggae Around the World with Long Shen Dao and Maxi Priest

8:00PM  – Think reggae is exclusively the purview of Rastafarians? Think again. Think Long Shen Dao. All six members of this Beijing group, making their North American debut, have earned solo success across various genres. But they come together to embrace the reggae spirit in a distinctly vibrant way that draws on rock, hip hop and ska, combined with traditional Chinese instruments like the guzheng (zither). Aptly, the group’s name translates as The Way of the Dragon God, for they are ferociously talented and heavenly sounding.

9:00PM – Since the release of his smash-hit cover of Cat Stevens’ “Wild World,” Maxi Priest has become one of the most acclaimed reggae singers on the planet. His ability to blend hard-core reggae vibes with more mainstream pop has led to seven gold albums and groundbreaking collaborations with Roberta Flack, Shaggy, Sly & Robbie, Beenie Man and Beres Hammond. Maxi makes his Luminato Festival debut with an intoxicating mix of hits and new material.

Sahara Desert Blues with Bombino and Amadou and Mariam

2:00PM – Though barely 30 years old, Tuareg guitarist Omara “Bombino” Moctar has witnessed two rebellions by his people in Niger, and is now devoted to helping heal with his anthems of peace. Unswerving in his commitment to dignity and generosity, Bombino has earned international recognition for his moving “ishoumar” songs, gaining the respect of, among others, Angelina Jolie, Keith Richards and Dan Auerbach of The Black Keys, who produced his recent Nonesuch release.

3:00PM – Amadou Bagayoko and Mariam Doumbia, known as “the blind couple from Mali,” are beyond category, serving up a mix of traditional Malian sounds, electric guitar, Cuban brass, Indian tablas, gutsy blues soaked vocals, dense African rhythms and pointed lyrics. After meeting as teenagers and marrying 32 years ago, the duo has circled the globe with their scintillating sound, sharing stages with Stevie Wonder and U2. Their latest album Folila features guest appearances by Santigold and the Scissor Sisters’ Jake Shears following the massive success of Manu Chao’s work on their album Dimanche à Bamako.

8:00PM – One of the most arresting voices on the Canadian music scene, often drawing comparisons to music legend Celia Cruz, Lady Son (aka Yeti Ajasin) redefines Afro-Latin grooves for the 21st century. Though Canadian-born of Italian-Nigerian-Jewish heritage, Lady Son’s deep love and appreciation for Latin rhythms has its roots in Cuba. Her debut CD, Semillas, explored her dual passion for Nuyorican-style salsa and Guajiro culture and earned her a New Music Award for Best World Album.

9:00PM – Performing since his mid-teens, Havana-born hip hop, Afro-rock musician and filmmaker X Alfonso began his career playing jazz and fusion while still in school before joining his parents’ group Síntesis. X Alfonso launched his solo career in 1998, releasing five albums that reflect his unique take on modern Cuban sounds, a synthesis of traditional Afro-Cuban and contemporary Cuban music. “Cubans today are a mix of Spanish, African, English, French, Chinese,” explains the Latin Grammy nominee. “I try to reflect all of this as a musician, drawing on different rhythms, melodies and harmonies.”

A Bittersweet Tribute with Patricia Cano and Danse Lhasa Danse

8:00PM – Of Peruvian descent, Sudbury-born Patricia Cano began her career as a dancer and community theatre performer. Inspired by Cree playwright and composer Tomson Highway, she starred in his plays Rose and The Incredible Adventures of Mary-Jane Mosquito, and together, in 2009, they premiered the Cree cabaret Kisageetin. Cano has since focused on her singing with the debut of her album This Is the New World, a collection of 12 original songs and one poem, presented in four languages.

9:00PM – Though born in New York, singer-songwriter Lhasa de Sela was truly both a Québec and Canadian treasure. After settling in Montréal, her collaboration with rock guitarist Yves Desrosiers led to her debut album, La Llorona. The 2009 release of her third album coincided with her diagnosis with cancer, and her stunning voice was silenced less than two years later. Now, choreographer Pierre-Paul Savoie has created Danse Lhasa Danse, a dazzling multi-arts celebration of her life that seamlessly combines music, dance and film, presented for the first time outside Québec at the Luminato Festival.

2:00PM – Even among ardent World Music aficionados, Garifuna music, unique to the tiny Central American nation of Belize, is considered a hidden treasure. Thanks to the efforts of late musician and activist Andy Palacio and his followers, the eight members of the Garifuna Collective, now led by Iván Durán, this vibrant, percussion-based dance music is finally earning the attention it deserves. Making its Canadian debut at the Luminato Festival, the Collective serves up an irresistible blend of rockin’ punta and traditional Garifuna sounds.

3:00pm – Eleven discs into a dynamic career, Juno-nominated tunesmith and troubadour Danny Michel performs audience favourites alongside selections from his latest release, Black Birds Are Dancing Over Me, hailed by The Grid as “a blend of folky grit and tropical rhythms.” Recorded in Belize, the album features Iván Durán and the Garifuna Collective who, following their opening set, will return to perform with Michel.

The Garifuna Collective To Release Two New Albums On July 2, 2013