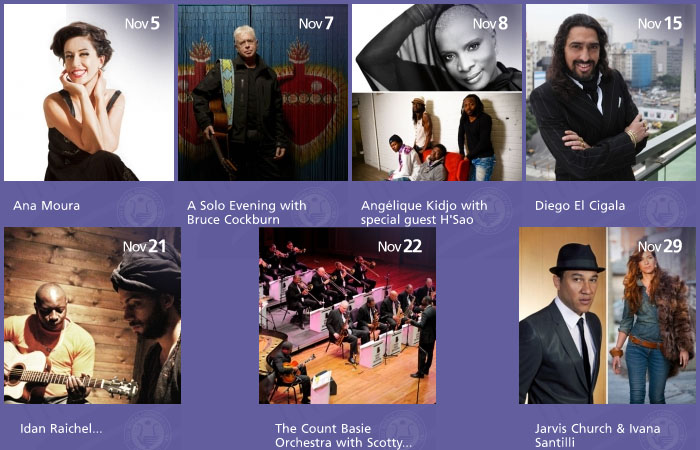 Return of Diego El Cigala, who launches the Music of the Americas series, and Angélique Kidjo

TD Jazz: A Salute to the Big Bands continues with Count Basie Orchestra

Music of the Americas

Each season Mervon Mehta, Executive Director of Performing Arts at The Royal Conservatory of Music, programs special concert series celebrating cultural richness from around the world. This year he has planned Music of the Americas, a special concert series in anticipation of the Pan Am Games in Toronto 2015, which opens on November 15 with three-time Grammy Award winner Diego El Cigala. Cigala returns to Koerner Hall with powerful flamenco interpretations of Argentine pieces by Carlos Gardel, Ástor Piazzolla, and Atahualpa Yupanqui, as well as classic tango pieces such as “Tus ojos se cerraron” and “El día que me quieras,” and contemporary pieces including “Garganta con arena.”

TD Jazz: A Salute to the Big Bands

The Conservatory’s celebration of the big bands continues on November 22 with “The Swingingest Band in All the Land!” The Count Basie Orchestra, with Musical Director Scotty Barnhart, is a phenomenon born in 1935 that is still going strong today. The Orchestra has won 17 Grammy Awards and 20 Downbeat and Jazz Times polls, more than any other big band in jazz.

Bruce Cockburn has always been a restless spirit. Over four decades, the celebrated Canadian artist has travelled to the corners of the earth out of humanitarian concerns – often to trouble spots experiencing events that have led to some of his most memorable songs. His characteristic blend of folk, blues, jazz, and rock relate his observations about the human experience. This rare solo evening with Bruce Cockburn on November 7 also celebrates the November 4 release of the artist’s new autobiography, Rumours of Glory.

Two more iconic Canadian artists, Jarvis Church & Ivana Santilli, make their Koerner Hall debuts on November 29. Jarvis Church shot to fame as frontman of The Philosopher Kings, back when he was known as Gerald Eaton. In this concert, he and his band, The Soul Station, bring soulful classics, Philosopher Kings hits like “Hurts to Love You” and “I am the Man,” and the best of Church’s solo originals to Koerner Hall. Ivana Santilli rode in a Funkmobile with nineties R&B group Bass is Base, but left the Juno-winning band to embark on her solo career. “She occupies a space between Esthero, Goapele, and Corinne Bailey Rae but is still distinctly her Toronto-born self.” (NOW)

During the sixth season of Bluebird North concerts, top Canadian songwriters come together with host Blair Packham to perform their music and tell us about the inspiration, the songwriting process, and the stories behind the songs. Presented in partnership with the Songwriters Association of Canada, the November 1 line-up includes vocalist and guitarist Gordon Deppe of the 1980s new wave band the Spoons (“Romantic Traffic,” “Nova Heart,” “Old Emotions,” and “Tell No Lies”), singer/songwriter David Leask, whom Songwriters magazine called “the most consistent Canadian songwriting competition winner,” and a third artist to be announced at a later date.

Ana Moura, with her luxuriant voice and captivating stage presence, is at the forefront of the fado music renaissance. “Even among the new breed of fado singers, which has dared to deviate from a rigid tradition, Ms. Moura is a distinctly worldly superstar.” (The New York Times) Presented in association with Small World Music, Moura makes her Conservatory debut on November 5.

Angélique Kidjo had the Koerner Hall audience dancing (some on the stage!) during her last concert in 2012 and her return visit on November 8 will not be any different. This Grammy Award-winning recording artist as well as a UNICEF and OXFAM Goodwill Ambassador, was called “Africa’s premier diva” by TIME magazine. This concert, presented in association with Batuki Music and Small World Music, opens with Montreal afro-pop group H’Sao, which draws from gospel, soul, R&B, as well as their roots from their homeland in Chad.

The Touré-Raichel Collective is a result of a chance meeting in an airport lounge between the Israeli pianist Idan Raichel and the Malian guitarist Vieux Farka Touré (son of Ali Farka Touré), two virtuosic artists from vastly different musical traditions. The meeting resulted in The Tel Aviv Session, one of the finest world music collaborations of the year. The two artists make their Koerner Hall debuts November 21 in an evening presented in association with Batuki Music and Small World Music.

All concerts take place at The Royal Conservatory of Music TELUS Centre for Performance and Learning, 273 Bloor Street West, Toronto.

The Royal Conservatory’s 2014-15 concert season is made possible through the generous support of: