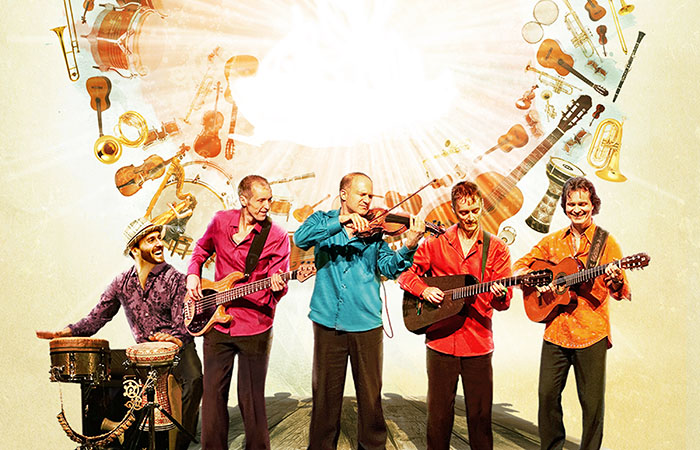 After a whirlwind tour stateside, JUNO nominated/SiriusXM Award winners Sultans of String return to homebase for a triple header of high octane shows!

First up, two shows with the Ontario Philharmonic performing the songs from their 2014 multiple award winning album, “Symphony!”, at Oshawa’s Regent Theatre on Nov 28th and Flato Markham Theatre on Nov 29th.

These musical border hoppers will be serving up a feast of sounds from around the world. Known for dizzying music jams, poly-rhythms and revved up riffs, the Sultans of String sound can’t be pinned down — it’s Sable Island meets the Silk Road, with detours through the Gypsy-Jazz coffeehouses of Eastern Europe, next an East Coast Kitchen Party, then over to the bustling markets of Cuba and Lebanon. Fiery violin dances with kinetic guitar while a funky bass lays down unstoppable grooves. Throughout, acoustic strings meet electronic wizardry to create layers and depth of sound.

The band is led by 6-string violinist Chris McKhool (Jesse Cook, Pavlo) who grew up in a Lebanese–Egyptian house bursting with music and diversity. Growing up, Chris was fed a steady diet of delicious musicality alongside Middle Eastern cuisine and violin lessons.

“I used to play classical violin in the youth symphony orchestras so the symphony orchestra is a world that I’m already comfortable in. I really love that sound and one of the things that I like to do with Sultans of String is lead us in other directions so that we can explore different sides of our musical selves. I thought it would be a really fantastic musical exploration to hear those world music grooves and rhythms and melodies with the majesty and the glory of the symphony orchestra.”

At the core of the band’s sound is McKhool’s bold and fiery fusion, melded perfectly with founding guitarist Kevin Laliberté’s (Jesse Cook) rumba rhythm– together their musical synergy created Sultans of String’s signature sound – the intimate and playful relationship between violin and guitar. From this rich foundation, the dynamic duo has grown, featuring such amazing musical friends as bassist Drew Birston (Chantal Kreviazuk), Cuban percussionist Chendy León (Alex Cuba), as well as special guests such as the Chieftains’ Paddy Moloney, folk-pop darlings Dala, sitar virtuoso Anwar Khurshid (Oscar winning Life of Pi), and of course, now symphony collaborations across the country for the ultimate crossover recording and show!