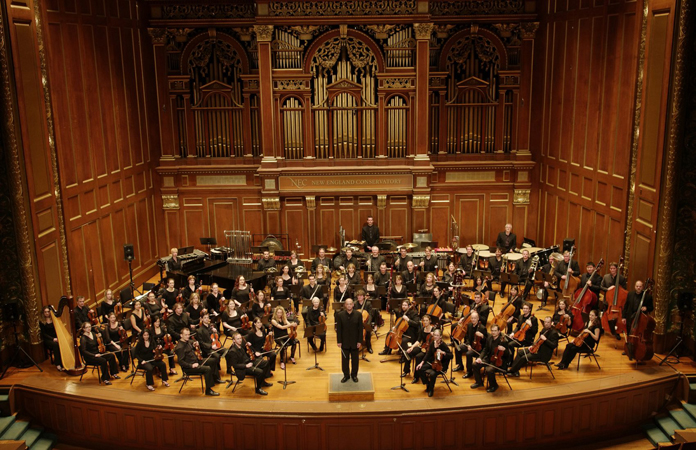 BMOP Radio is available online at BMOP.org/radio, Live365.com, and via mobile at Live365 app, and the iTunes or Android app store.

“BMOP Radio seeks to expand the new music audience, increase awareness of BMOP/sound’s recordings, and make 20th and 21st century compositions easily accessible to the widest possible audience, regardless of economic means or geographical proximity to a concert hall,” explains Gil Rose, founder and director of BMOP, BMOP/sound, and BMOP Radio. “With the advent of BMOP Radio, we are eliminating the barriers to exploring contemporary orchestra repertoire. We hope to give new music a greater presence in the lives of all types of listeners. “

According to Rose, BMOP Radio is helping build a continuous, living legacy for orchestral music. “All too often, even the best and most acclaimed new American orchestral compositions disappear from the concert hall after their premieres. To address this neglect, BMOP, its in-house record label, and subsequently its radio station, is creating opportunities for the diverse voices that reflect the American identity to be heard on the concert stage and in high quality recordings.”

With six Grammy nominations, the BMOP/sound record label lives up to WQXR Radio’s declaration that it puts “every other symphony orchestra in the country to shame […] in terms of its fresh, varied recordings.” According to Audiophile Magazine, “BMOP has been one of the dominant forces in programming and recording new and neglected modern American concert music, with BMOP/sound offering a wealth of releases consistently notable for the scope and daring of the repertoire, the superior expertise and polish of the performances, and the strict adherence to the highest standards of sonic reproduction. Much of the music on BMOP/sound is packed with intricate and novel instrumental pyrotechnics, and to hear the modern symphonic orchestra in its full splendor, rendered with a rich, vivid presentation that conveys all the detail, dynamic range, timbral subtleties, and acoustic space, is quite simply stunning.”

About BMOP/sound
BMOP/sound, BMOP’s independent record label, was created in 2008 to provide a platform for BMOP’s extensive archive of music, as well as to provide widespread, top-quality, permanent access to both classics of the 20th century and the music of today’s most innovative composers. BMOP/sound has garnered praise from the national and international press; it is the recipient of six Grammy Award nominations and its releases have appeared on the year-end “Best of” lists of The New York Times, The Boston Globe, National Public Radio, Time Out New York, American Record Guide, DownBeat Magazine, WBUR, NewMusicBox, and others. Admired, praised, and sought after by artists, presenters, critics, and audiophiles, BMOP and BMOP/sound are uniquely positioned to redefine the new music concert and recording experience. BMOPsound.org