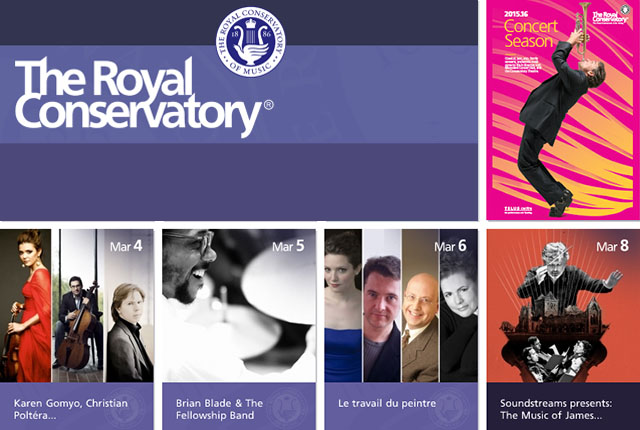 On March 5, Brian Blade & The Fellowship Band are featured in the next concert of “Katrina 10 Years On,” The Royal Conservatory’s jazz series that salutes the spirit of the people who suffered from one of the worst hurricanes in history. Easily one of the most versatile and soulful musicians in jazz, Louisiana drummer and composer Brian Blade has played with everyone from Joni Mitchell to Seal to Wayne Shorter, and formed The Fellowship Band in New Orleans with Jon Cowherd (piano), Chris Thomas (bass), Melvin Butler (tenor and soprano saxophone), and Myron Walden (alto saxophone and bass clarinet). “Post-bop sophistication is gently sifted through layers of gospel, country, folk and soul, with the implicit aim of balancing intellect against emotion. And it works.” (The New York Times)

George Frideric Handel’s Alcina, conducted by the founding director of Tafelmusik Chamber Choir Ivars Taurins, takes place in Koerner Hall on March 16 and 18, and features the talented vocal students of The Glenn Gould School vocal program and the Royal Conservatory Orchestra. Alcina is opera seria, a style of Italian opera that emphasizes solo voice and bel canto, a florid vocal style. This fantastical tale of the sorceress Alcina, who lures men to her island and transforms them into animals, is directed by Canadian opera and theatre director Leon Major, former artistic director of Boston Lyric Opera and current Artistic Director of The Maryland Opera Studio for the University of Maryland.

Trio of spectacular new-generation classical artists, Karen Gomyo, Christian Poltéra & Juho Pohjonen appear at Koerner Hall on March 4. Canadian violinist Gomyo, who has been hailed by the Chicago Tribune as “[a] first-rate artist of real musical command, vitality, brilliance and intensity;” Swiss cellist Poltéra, whose playing The Strad describes as “perceptive and expressive;” and one of the brightest young instrumental talents to emerge from Finland today, Pohjonen, who has “dazzling keyboard technique and, even more impressively, a broad and varied textural palette that allows him to shade his performances with great subtlety,” (San Francisco Chronicle) perform Haydn’s Piano Trio in E Major, Janá?ek’s Pohádka (Fairy Tale) and Violin Sonata, and Dvo?ák’s Piano Trio in F Minor.

“You might be forgiven for thinking that French violinist Augustin Dumay and Montreal-born pianist Louis Lortie were sent to Earth from some orbiting Vulcan planet where they practice the art of mind-melding — the deep and highly personal exchange of telepathic thoughts through which the participants become one … it’s as though Dumay and Lortie have figured out how to breathe in sync, to think, imagine and create as one. Both musicians explore the elegance and poetry in this music without flash or dazzle …These performances are passionate and intense as well as supple and refined.” (CBC Music) The program for their concert on March 30 includes Beethoven’s Violin Sonata No. 5 in F Major, Strauss’s Violin Sonata in E-flat Major, and Franck’s Violin Sonata in A Major.

English pianist Paul Lewis returns to The Conservatory on March 20 as part of the Invesco Piano Concerts series after his impressive performance last season with Lisa Batiashvili, which marked the 500th concert in Koerner Hall. “Time and again you marvel at the confidence and sureness of Lewis’s playing, combined with the finesse and musicality that he has always displayed. It’s the kind of playing, in fact, where comparisons cease to matter …” (Gramophone) His program consists of Brahms’s Three Intermezzi and Four Ballades, Schubert’s Piano Sonata No. 9 in B Major, and Liszt’s “Dante Sonata” from Années de pèlerinage.

Koerner Hall is prod to introduce Norwegian violinist Vilde Frang, “clearly a new star in the violin firmament.” (The Guardian) Noted particularly for her superb musical expression as well as her well-developed virtuosity, Frang has been in demand since her debut with the Oslo Philharmonic at age 12. Uzbekistan-born Michail Lifits, praised for his inspirational tone and his wise maturity as well as for the breathtaking beauty of his playing, has increasingly captured public attention since his debut at the age of 13. On March 2, the duo performs Fauré’s Violin Sonata No. 1, Lutos?awski’s Partita, and Strauss’s Violin Sonata in E-flat Major.

Presented in partnership with the Songwriters Association of Canada, top Canadian songwriters come together with host Blair Packham to perform their music and tell us about their inspiration, the songwriting process, and the stories behind the songs in the seventh season of Bluebird North concerts. The line-up of artists for the March 19 evening will be announced soon.

The Royal Conservatory’s 2015-16 concert season is made possible through the generous support of:

March Concerts at The Royal Conservatory of Music

All concerts take place at The Royal Conservatory of Music