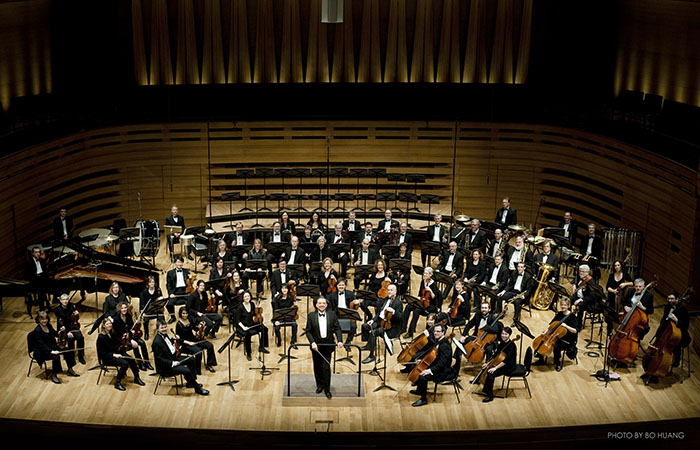 On Thursday January 29th at Koerner Hall, Esprit Orchestra, conducted by Alex Pauk, performs a concert featuring World Premieres of commissioned works by Canadian Samuel Andreyev and British composer Philip Cashian. The programme also includes the Canadian Premiere of a piece by Icelandic composer Daniel Bjarnason and a reprise of a work by Robert Aitken previously commissioned and premiered by Esprit.

In his new work, titled The Flash of the Instant, Andreyev comments that “minutely orchestrated sounds are subjected to constant, prismatic micro-variations. In this music, transitions between one material and another are generally abrupt, the better to highlight the specific qualities of each. Unusual tone colours are created through rare instrumental combinations. More generally, this work is reflective of my life-long quest for a transcendent sonic poetry, on the largest scale I have yet attempted.”

Cashian states that his new work, the world’s turning “continues my fascination with, and exploration of, musical momentum, stasis and the use of mechanisms, patterns, line and repetition in music. My new piece is also a vehicle for the virtuosity of the Esprit Orchestra. The title is borrowed from William Boyd’s novel Waiting for Sunrise in which the main character, Lysander Rief, feels for a moment that ‘time has stopped and the world’s turning also.”

Bjarnason’s Over Light Earth, as described by the composer, “is a reaction to/conversation with/reflection on paintings by Mark Rothko and Jackson Pollock that can be found in the Museum of Contemporary Art (MOCA) in Los Angeles.”

The piece was commissioned by the Los Angeles Philharmonic and Barbican, London and was premiered by the LA Phil New Music Group, conducted by John Adams, as part of the “Green Umbrella” series in October 2012 at the Walt Disney Hall. The work’s orchestral layout aims to create a “stereo” effect with the orchestra’s two pianos and two percussion set-ups being placed as far apart as possible “at opposite wide ends of the ensemble”.

Robert Aitken appears as composer and flute soloist in the performance of his own Berceuse for flute and orchestra. The piece demonstrates Aitken’s impressive knowledge and mastery of the instrument as a performer (including extended techniques) and vivid imagination as a composer. In two contrasting movements, the work is dedicated to the memory of the composer’s father and bears the subtitle For Those Who Sleep Before Us.

Samuel Andreyev, born in Kincardine, Ontario, has lived in France for the last several years. Among other honours, he was recipient of the 2012 Henri Dutilleux Prize in composition.

Philip Cashian is Head of Composition at the Royal Academy of Music in London. Esprit’s premiere of his newest work marks the third time Esprit has performed his music.

Daniel Bjarnason, a composer with a burgeoning international career and a strong connection to pop music, is based in Reykjavik.

Robert Aitken, Artistic Director of Toronto’s New Music Concerts, has had much influence on contemporary music in Canada as a composer, performer, conductor and teacher.
Esprit Orchestra – the world’s turning, Thursday January 29th, 2015

Robert Aitken: Berceuse
(In memory of my father,  for those who sleep before us)
for flute and orchestra

Samuel Andreyev: The Flash of the Instant (World Premiere)

Sultans of String in Concert in Toronto, Oshawa, Markham