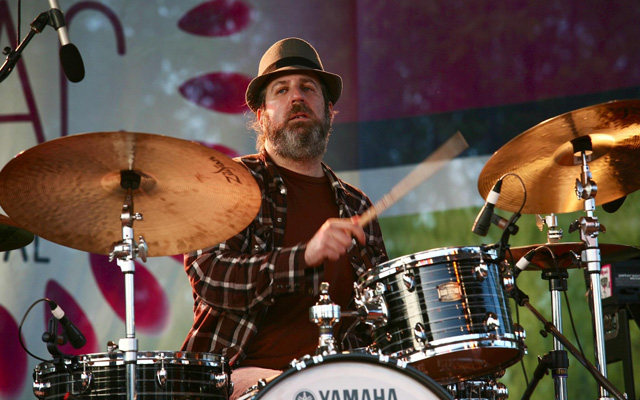 The drummer Aaron Comess is chameleonic. He seems to fit in everywhere, playing with Jazz musicians such as Roswell Rudd, and musicians that comprise one of his regular groups the Spin Doctors, Joan Osborne, Natasha Bedingfield, Edie Brikell, Steve Martin, André Bocelli, David Foster, Aaron Neville, German superstar Marius Westernhagen, to name but a few. Music is like a rush of hot blood to the head for Comess and from there it explodes onto his instrument of choice, the drums. Musicians such as Comess love to play live as the audience – like any audience – revs up the pulse of both the heart of the musicians and the music itself. 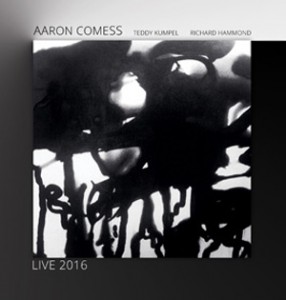 The visceral, raw and exciting nature of this music on Live 2016 gives credence to that fact. Each song is like a roaring waterfall tumbling from a great height and rushing towards the inconceivable and the inevitable to gather like musical architecture in the mind’s mind. And this is the stuff that gets audiences going. This is the stuff that Aaron Comess does best. And so it is on this album that comes like a bolt from the blue. For this assault on the ear, Comess has joined forces with the bassist Richard Hammond and the guitarist Teddy Kumpel. The musicians have known each other for a while and judging by the seemingly telepathic communication between the three song after song if would seem that these musicians also know each other’s minds intimately. But more than that the musicians give it their all. And Comess leads from the front at all times. He is fluent and multi-faceted, and tonally seductive; an elegant technician of exceptional elegance and sophistication. Part of that sophistication is his refusal to dazzle. Technique is at all times put to strictly musical ends. As a result his playing is informed by exquisite taste and feeling.

The playing here – quite strikingly throughout the album, but especially in ‘Africa’ – is blessedly free of that metre-driven angularity and stasis that have increasingly beset the performances of many of his contemporaries. In songs such as ‘Lullaby’ and ‘Beautiful Mistake’ all three musicians soar. Melodic inflection – particularly from Kumpel – is curvaceous, natural and discreetly sensuous; the tonal palette is unfailingly refined (a prime requirement of excellence) and the pervasive polyphony of contemporary music is eminently clear but never ostentatious.

Listening to this album, feeling its raw, bone-shattering energy as well as its elegance you get a feeling of large-scale momentum and binding connections. It is a truly BIG album, epic in every sense of the term. Aaron Comess is probably going to be hard-pressed to top this, at least not in the near future. For that matter neither are Teddy Kumpel and Richard Hammond likely to make a more beautiful noise – with or without Comess.

Barb Jungr: Shelter From The Storm