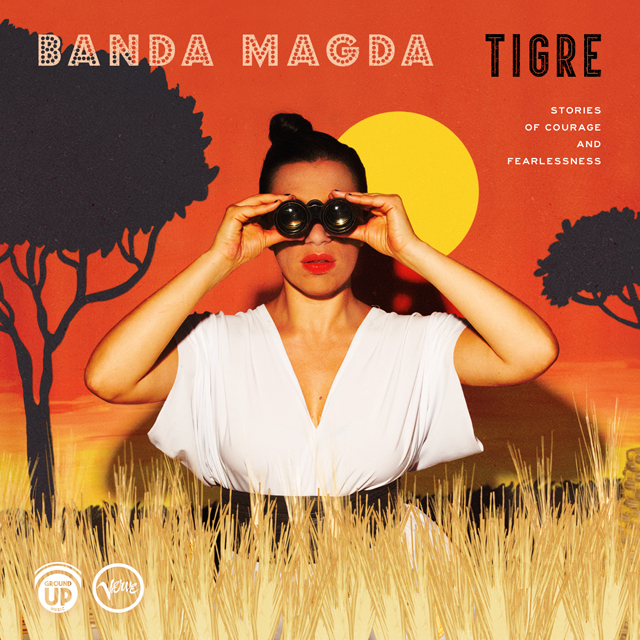 Of all the vocal-driven ensembles in the world of contemporary music there is none as compelling or beckoning as Banda Magda. In the music of this group there are many moving parts, but there is no doubt that its driving force is Magda Giannikou who is most often listed as having played accordion on stage or in the studio, but is also a multi-instrumentalist who makes it seem as if she was also born to be – among other things – a truly gifted contrabassist. As a composer, Miss Giannikou conceives works that are operatic in scope even when she is writing a 5-minute song. Her Grecian background enables her to create and empathise very deeply with the characters and her music is redolent of rhapsody, and dramatic catharsis. As a singer she is unmatched in her ability to captivate – even seduce – her audiences with whom she could be in just about any part of the world as she can write and sing lyrically in French, Spanish, Portuguese, Greek and English thus far, at any rate…

Tigre is the third full length album from Banda Magda. Miss Giannikou, who has created practically all of the music on the record on her own, has subtitled the album Stories of Courage and Fearlessness. They became meditations on a tiger’s mask that ostensibly hangs upon a wall where she lives. True to form, however, Miss Giannikou has created a living, breathing character from this contemplation, melding into it, one might assume, experiences and emotions that have and continue to touch her own life. What emerges is the story of a girl, growing into womanhood, learning to cope with disappointment and pain, and ultimately triumphing against all odds to become a woman of substance. The beauty of this entire coming-of-age story is that in all of the thirteen loosely-connected narratives very little is stated – at least in prosaic terms – but everything is evoked most lyrically and memorably.

The Banda Magda sound is shaped by Miss Giannikou’s voice. It is marked by crystalline enunciation; it is light and high-sprung and Miss Giannikou uses this quality to draw listeners into her story, feel her every nuanced emotion to such an extent that one might easily find oneself laughing and crying with her as she peels away at the layers of meaning in the narratives and lyrics of the music. This is articulated through an almost Bizet-like evocation of Spanish locale in “Muchacha (Ojos De Papel). This just after a glorious fado has been conjured in “Coração”, which in turn followed a magnetic chanson “Tam Tam”. And on… and on it goes as we are willingly kidnapped into the world of Tigre and Banda Magda, which it must be mentioned (again) is nothing if not a group sound.

The core ensemble of Mika Mimura on vibraphone, Marcelo Woloski on percussion and Ignacio Hernández has been joined by a stellar cast of musicians including the bassist and creator of Snarky Puppy, Michael League and the great Leni Stern on n’goni. For Tigre Banda Magda has also drawn on the skills of another major talent – violinist Curtis Stewart – around whom are eight other strings players who have come together to add a luscious viscosity to this music. Tigre is what one might refer to as a ‘great record’ because it has all of the musical elements – composition genius, arrangements and executional virtuosity in a heady mix that meets invisible elements such as surprise – in a perfect product.