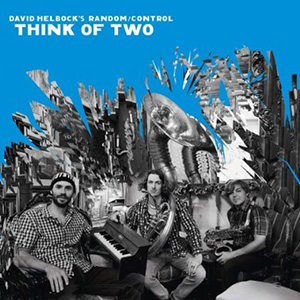 The Europeans have almost always been adventurous first. After all, it was the Europeans who sailed to the New World and not the other way around. So also with Charlie Parker; it was Boris Vian who was among the first to really appreciate his music, while others were still calling it offensive and wrong. The Europeans were also first to “get” musicians from Sidney Bechet, Thelonious Monk, Kenny Clarke to Ben Webster; the Dutch and Swedes to “get” Eric Dolphy; and Albert Ayler… and so on… So it should come as no surprise that Think of Two by the Austrian, David Helbock’s Random Control is a magnificent album. After all it is a tribute to Thelonious Monk and that great Brasilian, the Sorcerer, Hermeto Pascoal. The music is inspired—well beyond what music inspires it—and it is truly original, creative, venturesome and quite beautiful. Being an homage does not mean to say that it must copy or reproduce, but rather explain and enhance the music and the musicians that it seeks to pay homage to. This it does in the grand manner. And for that all praise must go to the three musicians who play this music—the repertoire of Mr. Monk and Mr. Pascoal. This is the brass player Johannes Bär, the woodwinds and reeds player, Andreas Broger and or course the man who re-invented it all: the keyboard wizard and all-round genius, David Helbock, who helms the group, Random Control.

The music is riveting, recognisable and yet so new that it just might have been created by the original artists in another day and age. It is also humorous as the original artists intended it to be. Too bad no one was taking notice then. But here is a second chance to do so. Most of all it is played by musicians who are unbridled virtuosos, well-versed in music history as well as all good conservatoire musicians are required to be (although this should never be seen as a pre-requisite for any good music). But the fact is that Mr. Helbock gets it. His “New Orleans” march and strut and his “stride” piano is exquisite and played to perfection. He seems to have mastered the art of pianoforte as well as its myriad styles (for want of a better word). This is also true of Johannes Bär, who is a virtuoso on a variety of horns and he plays each with such mastery as if it were his main instrument. His accents are superb and that makes his expression something quite breathtaking. This is also true of Andreas Broger, who plays his reeds as if he were master of all. But there is more. The musicians are also masters of the idiom in which the music is played. Not only are they proficient in jazz, but also choro, forró, and other Brasilian patterns and their brilliance in each is truly amazing. But technicality is one thing; being able to use and invent in each form is quite another.

The music of Thelonious Monk is deconstructed as no one—except Heiner Stadler—has done before. “’Round Midnight” is one of the most temperamental charts, but the manner in which it has been tamed by these musicians and astoundingly re-constructed is something that will leave the listener breathless. The moodiness of the hour is turned into real crepuscular music; its colours are indigo blue and bible-black. “Pannonica” is another masterful re-construction; exquisitely coloured by virtue of the instrumentation and the gorgeous timbres of the instruments. So also are the other Thelonious Monk compositions. It is also of note that the manner in which the more contemporaneous Hermeto Pascoal’s music is played is astonishing and truly memorable. “Nas Quebradas” is a masterpiece. The choro, “Palhinha do Hermeto e da Aline” is beyond beautiful and makes a gorgeous tribute to the master as is “Hermeto”. Both these compositions are not only true to the very nature of Brasilian music but they also capture the idiosyncrasies of Mr. Pascoal’s unique voice.

If anything this is a flawless album and it will be the envy of many musicians. It also goes to reinforce the idea that most European players keep a more open and more fearless mind when it comes to invention and improvisation, and when it comes to paying real tribute to the giants of music in any idiom.

David Helbock, born on the 28th of january 1984, began playing the piano at the age of six. He studied at the Feldkirch Conservatory with Prof. Ferenc Bognar, where he finished 2005 with an “excellent” degree in performance and since 2000 he took lessons with the New York jazz pianist Peter Madsen, who became his teacher, mentor and friend. David Helbock played Tours and Recordings with different projects in countries like the US, Australia, Mexico, Russia, Kasachstan, Kirgistan, Ethopia, Kenia, Senegal, Marokko, Indonesia, Malaysia, India, Argentinia, Chile and all over Europe.

Since the start of his musical career David Helbock is also very active as a composer. One of his works is among others a big “One-Year compositional project” where he wrote a new piece every day for a whole year (in April 2010 his Personal Redbook with over 600 pages of music was released). Two rewards and the audience prize at the world biggest jazz-piano-solo competition of the Montreux Jazz Festival, a lot of enthusiastic/international reviews for his CDs and the most important prize in Austria 2011 – the “Outstanding Artist Award” – David Helbock, the piano player coming from a small little village in Austria called Koblach, is with no doubt, on his way up to a great international musical career. Helbock is not only a great pianist, he is also a very individual thinker, who is investing not only a lot of dexterity but also quite an amount of brain activity to his projects.