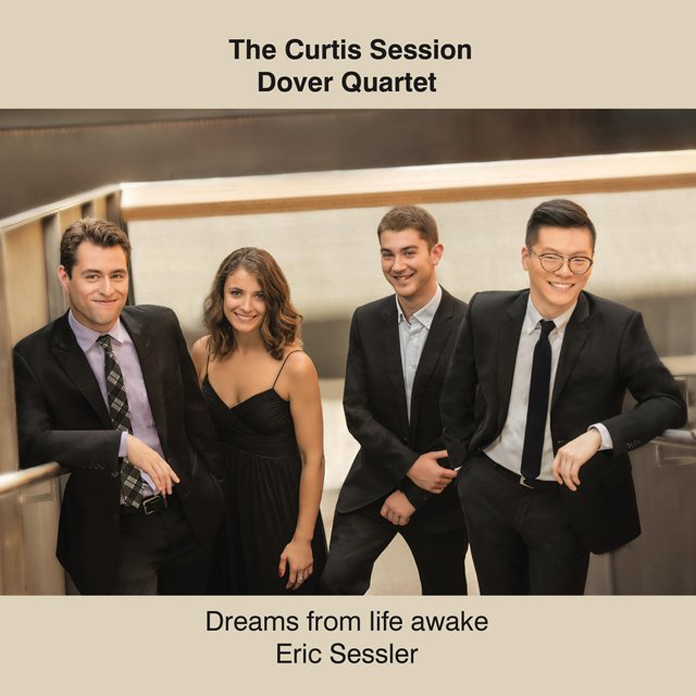 The young strings virtuosos of the Dover Quartet bring to life, in all its radiant apparel, the enigmatic splendor of the music of Eric Sessler. “Dreams from Life Awake”, a string quartet that constitutes The Curtis Session seems to indicate the high-water mark or Mr Sessler’s neo-classical style. To be sure it is an often white-knuckle transitional work, largely neo-classical, but showing distinct signs of the composer’s increasing fascination with unusual harmonic and rhythmic structures and contrasting instrumental “personalities”.

For instance, the sequences in the second movement of the quartet has dissonant violins and stammering viola are heard streaming their music against the lyrical and seemingly improvisatory cello creating music that seems to have sprung out of a different musical universe, an exhilarating  musical jeu d’esprit in which modernist techniques pioneered in the quartet are given a refreshing outing – with oblique neo-classical nods.

Over the four movements of “Dreams of Life Awake”, complexes of seemingly simultaneous musical events constitute the most arresting and challenging feature of Mr Sessler’s music. While one instrument may accelerate to a vanishing point, another slows to relative immobility; effusive lyricism is set against complex metronomic pulses and as many as four independent musical streams appear to run parallel.

In the final movement entitled “Determination-Energy-Resolve”, the music is taken one step further, dividing the instruments into two contrasting duos, each almost playing in different tempi – so that, in effect, there are actually two separate pieces running simultaneously from beginning to end. The musicians of the Dover Quartet play with unique and palpable authority throughout. Their interpretation makes the black dots leap off the page and they strike the perfect balance between muscularity and lyricism, which seems, in turn, to mimic the states of dreaming and wakefulness. This makes marvelous musical and expressive sense of Mr Sessler’s complex, multi-layered constructions.

Projeto Arcomusical: Spinning in the Wheel