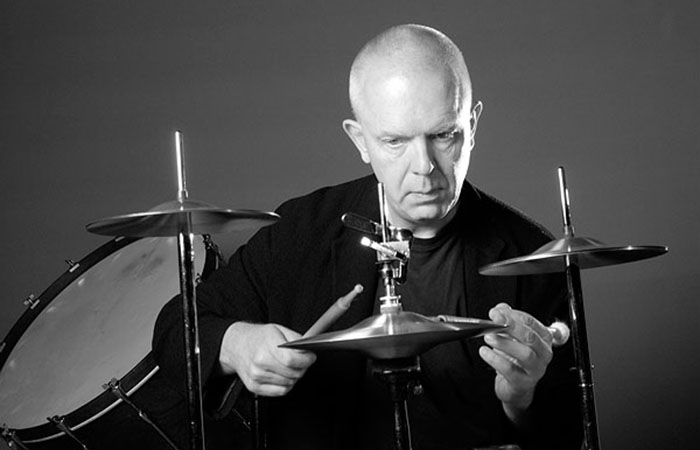 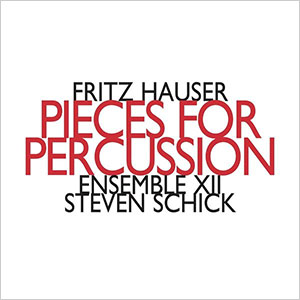 The drum—first the stone and later the hollowed log drum—are probably among of the oldest of instruments, after the human voice, that is. Given that a number of ethnomusicologists agree that this is probably true, the music on this recording, with its array of percussion instruments—new and ancient—is breathtaking in scope. Fritz Hauser, the composer of Pieces for Percussion seems to have conceived the music so as to suggest that it echoes in the mists, stretching from the dawn of time, when the very molecules that made up the dust that swirled in the tumultuous winds that swirled around the earth sang a song of the mighty universe. Thus it is suggested that the music here—although inspirational in the making of music in a variety of idioms—is, itself not written with any particular idiom in mind. It is music that is also outside of any pulse or method of timekeeping. It is quite timeless in its scope and suggestion. Mr. Hauser reflects his rather superior intellect into the music. He also pours out his emotional relationship with percussion instruments in an unabashed manner; one that becomes all-encompassing, suggesting that his entire body—and the bodies of the performing musicians—becomes an integral part of the music; in fact so integral that notes expand and rhythms beget an echoing melody in “Nothing Will Ever Change,” where the music suggests a mighty continuum of the human species in the humming echo somewhere in the latter part of this piece.

In the piece immediately following “Bricco Lu,” the chattering splashes of cymbals jibber-jabber as if engaged in an industrious and intense fracas only to subside and then melt into the echo of erudite gongs and cymbals that bear an eerie resemblance to the mediation of the Almighty and his chorus of acolytes, come, as it were, to judge the living and the dead. Again this is suggested; not necessarily intended, but certainly reminiscent of the tumult of a Biblical event at the dawn of time itself. There is that kind of profundity in the music. This leads to the belief that Mr. Hauser intended for his music on this recording to be taken infinitely more seriously than merely an attempt at examining the timbre and texture of percussive musical instruments through their manipulation, via a series of gestures employing technique, dynamics and other energetic employment of playing them. “Die Welle,” with its production of catastrophic sound might suggest this, through patient unfolding of a rather ominous and eminently philosophical drumming narrative employing a series of tuned drums, gongs and cymbals. The snapshots of the Universe continue to unfold in the opening of the militaristic call to arms of the rattle and hum of snare drums in “Le Souvenir.” This is quite a sinister piece and rightfully so as it spells all of the unpleasantness of the warrior mentality of man, which—even as the rat-a-tat of the snares subsides onto the resonant pings of the triangles, the music dissolves into the catastrophic echoes of bass drums and (the suggestion of ) barriles de bomba, and other orchestral tympani’s.

The dramaturgy of “Zeichnung,” delivered by an assortment of gongs suggests recovery of a sort and this is further enhanced by the key strokes on the marimba in the immediately following “Die Klippe”—another ponderous piece that is suggestive and impressionistic and seems to pick up from where the previous couple of charts left off. Here a recovery of sorts brings back echoes of the music of “60” and this suggests that the close of the composition is imminent. Thus the incessant yammering of flat-sounding percussion suggests a rebuilding of what was left to me a wasteland, with percussion echoing other percussion as well as bells and gongs firing up the interaction between the musicians who represent the rise and fall of man, in a manner of speaking. Its companion piece “Zytraffer” continues the industrious manner of the music albeit adding to the range of percussion instruments. This piece also adopts a kind of threatening stance almost suggesting that the composer intends of the characters to suggest an unrepentant posture, picked up from the initial parts of the suite. There are hints of “Bricco Lu,” “Die Welle” and “Le Souvenir” in this part of the composition, bringing the music that much closer to the beginning of the drama that unfolded from the first part of this recording. This brings the narrative back to “60 in Space,” which once again regales the listener with the drama that unfolded right in the beginning. Now, however, the music goes where it never dared to go before, reaching out, as it were, to the being that His Divinity created the echoing struggling universe struggling with sending forth for answers for the rough and tumble of its existential angst.

Born 1953 in Basel, Switzerland. Fritz Hauser develops soloprograms for drums and percussion which he performs worldwide. Cross-media works with dancer/choreographer Anna Huber, with architect Boa Baumann as well as with director Barbara Frey. Compositions for percussion ensembles and soloists, sound installations (and other Therme Vals), radio plays, music for films and readings.

In the field of improvised music he has worked together with numerous musicians: Urs Leimgruber, Joëlle Léandre, Marilyn Crispell, Christy Doran, Pauline Oliveros, Lauren Newton, Patrick Demenga and others. Since the Stockholm International Percussion Event 1998 he has been collaborating with different percussion groups and soloists around the world: Kroumata, Synergy Percussion, Nexus, Speak Percussion, Keiko Abe, Steven Schick, Bob Becker, Michael Askill and others Numerous CDs as soloist and with various groups are available.