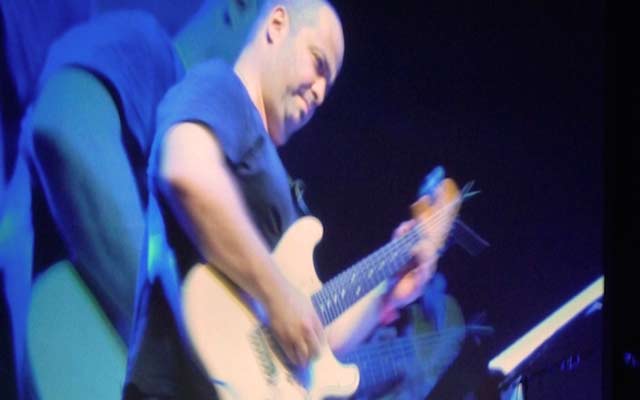 As if he needed to remind us, Gene Pritsker has, once again showed that he is a composer (and one would assume here, a musical director as well) of dazzling invention. This extraordinary work Manhattan in Charcoal is as he calls it, a ‘chamber opera’ is conceptually so absorbing that despite its bleak and often depressing stretches that I am riveted not only by its narrative – the libretto is by the award-winning poet Jacob Miller – but by the exquisitely suggestive music that brings the suggestion of the canvas and the city it celebrates to life in almost expressionist shadow and light. The visceral, exciting nature of the experience is important to mention as this is an audio-only production. A DVD of the production has yet to be released. So in a sense it serves us well if we imagine that this is a radio production. Whatever way you choose to listen to it, this opera will grab you, often put a twist in your gut and every once in a while leave you breathless. 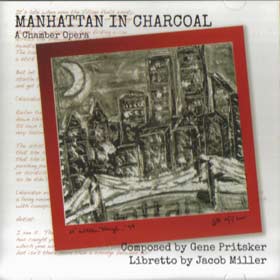 The stage is set by Jacob Miller, who plays the part of a poet and is the narrator of the story. While he is justifiably neutral character he plays the part of the interloper in the story with often spare, yet expansive and meticulously rehearsed precision. Because this is essentially a cast of two principal characters, Miller must know when to shine in the limelight and when to recede from it so as to let the two main actors – Charles Coleman, the artist and Lynn Norris who plays Beatrice, his lover, take centre stage. This Miller does with the gracefulness of a sublime accompanist, who ducks into the shadows when Coleman and Norris appear. Once the opera opens up, if one can call it that, as if the camera were pulling back for a macro view of the setting of the opera – the artist’s studio where almost all of the action takes place. Mood and setting are profoundly noir and this is why I am reminded of the long bleak shadows of the Expressionists. But make no mistake; this is very much a contemporary take on that movement.

Manhattan in Charcoal is both a story and a metaphor, a painting and a city darkened by failed dreams and devastated relationships. Or as Beatrice puts it at the very end of the opera – “Don’t you know, in New York/ the challenge is not dying/the challenge is living”. But why wait until the end? This theme of death/life is a recurring metaphor – in the destruction of the charcoal painting by the jealous Beatrice, in the failed relationship between the artist and Beatrice, as well as the failed relationship between the artist and his casual lover; the abortion of their baby and most important… All of that gives way to the coup de théâtre (I won’t reveal it – I’ve probably spoilt enough surprises already) that suggests that the angst of Manhattan in Charcoal is the drama of the artistic process, a metaphor in its own right. And because art will triumph over the artist you are ultimately drawn not towards the shadows but to the light, or as Miller the Narrator tells us quite eloquently: “It’s dawn now. The rain is finally letting up/And as the night’s familiar black sheet is ripped – /a finger’s last rub from the black carver stick – / first light’s colors glide in with departing clouds.”

Just so we never lose track of the fact that this is an opera it pays to be reminded musically this is probably one of Gene Pritsker’s finest scores to date. It is highly atmospheric has a gratifying richness of tone and manner, and is acoustically more suggestive than anything Pritsker has ever written before. His challenge, here, I suppose, was not to meld musical forms but to create a pure soundtrack to a dense storyline. This he completes with a degree of majesty that belies the small canvas on which it is played. Complemented by a libretto that is impeccably written, superbly cadenced and gorgeously narrated this gives credence to my thesis about the Pritsker/Miller super success. No words are good enough to praise the darkly beautiful baritone of Charles Coleman and the moody soprano of Lynn Norris. The poise and clarity of phrasing and their dramatic delivery is heightened by superbly understated orchestral accompaniment and a fine chorus as well. What’s left? I can only hanker after a DVD version of Manhattan in Charcoal to complete the experience.

Composer/guitarist/rapper/Di.J. Gene Pritsker has written over five hundred compositions, including chamber operas, orchestral and chamber works, electro-acoustic music and songs for hip-hop and rock ensembles. All of his compositions employ an eclectic spectrum of styles and are influenced by his studies of various musical cultures. Read more…

Jacob Miller is a published author and poet who founded the Studio Writers’ Workshop in New York City in 1989, building a writers’ community through his private group workshops and his individual editorial and mentoring services. Over the years, he has taught Creative Writing and Literature at New York University, Hunter College, the Gotham Writers’ Workshop, and the Scuola Internazionale in Italy. Jacob also worked as an Editor for the University of Michigan Press… Read more…