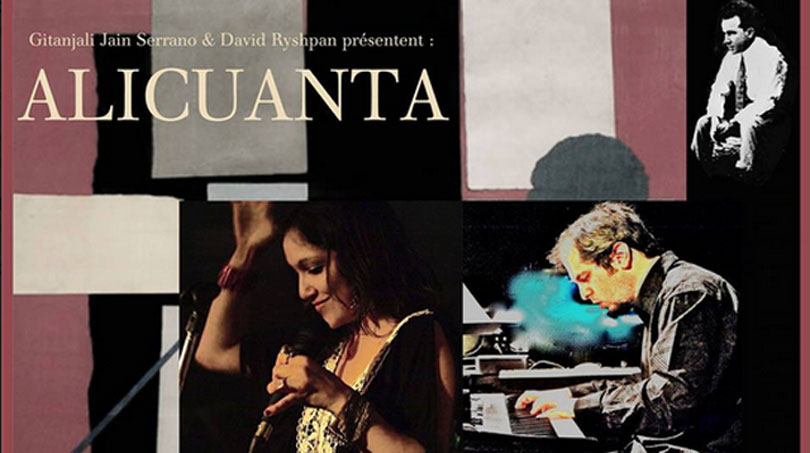 The chanteuse, Gitanjali Jain Serrano and pianist David Ryshpan are responsible for this ingenious hour-long extended composition, Alicuanta. The lyrics are the work of Mexican poet Francisco Serrano whose cycles of poems “Elegía trágica” (Tragic Elegy), is based on the tragic life and written in homage to General Francisco Roque Serrano (1889-1927). The general was a leading figure of the Mexican revolution and was brutally assassinated by his opponent in the midst of the presidential campaign of 1927. Mr. Ryshpan’s music draws inspiration from Mexican folk music, Jazz and contemporary classical music. The work is impressive both for its lyrical content as well as for its creative use of music to make this poetry in which familial, cultural, social and political history comes alive. Ryshpan’s extensive jazz and world music background is well-met in Jain’s experience as an improvisation and theatre. Ms. Jain Serrano describes the lyric poetry and music as a suite of “songs of love and lost love, pain and hope, rhythms that evoke surprise, joy, gratitude, and loneliness and longing and nostalgia.” (also by Francisco Serrano). This is a poignant observation of “a passionate record of the forgotten wonder of being alive.” 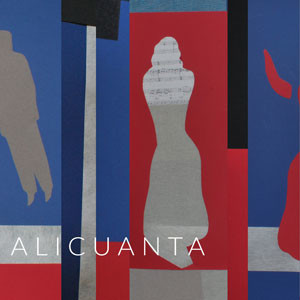 The project appears to have been conceived as a multi-media performance with words and music accompanied by dance and other visual enhancements. To the extent that is perhaps so, the record, might have suffered somewhat for the absence of that dimension. However, Ms. Jain Serrano’s vocals are breathtaking. Her warmly textured voice, especially in the middle range, lends itself alluringly to a character in this dramatic adventure that is defined by tragedy. In this regard her portrayal of this woman is defined by tenderness, intimacy and melancholy. She brilliantly brings the inner life of the characters in this tragic set of circumstances to the fore in a soulful and mystical way. The vocalist’s wealth of virtues includes her intuitive sense of apposite, well-proportioned ornamentation and a sure feeling for just tempo. She is not afraid to take her time where the text and music requires it as you will discover in the spoken sections and in the three-part “Elegía trágica”. Ms. Jain Serrano sustains this most effectively and is sympathetically accompanied by David Ryshpan and the rest of the ensemble. I found her ghostly vibrato and vocal portamentos breathtakingly alluring. This kind of singing with eloquent instrumental partnership makes for a truly rewarding encounter.

This leaves us with the other half of this partnership, the pianist David Ryshpan… Here is a virtuoso with very large ears and with the finest sense of timing. In all performances that include a pianist and a singer—that is two voices—a great pianist must know when to bask in the spotlight and when to recede into the shadows so as to let his vocalist shine. Mr. Ryshpan is a master of such an easy existence. As a pianist he is astoundingly precocious, bristling with ideas that stir the senses. His creativity is nonpareil and he is also blessed with technical prowess that makes for a mastery of his instrument like few others. His writing is inspired as well and this is what makes this marriage of words and music such a celebrated one. He is as important to this project and does ascend the giddying heights of the melodies with memorable artistry.

David Ryshpan is a Canadian pianist, composer, and arranger. Born in Toronto, he developed an interest in jazz music at an early age. By age 14, he was regularly performing solo piano matinées at Toronto’s The Rex. His path led to Montreal, where he graduated from the McGill University Jazz Performance Programme in 2006. Additionally, David has participated in workshops such as the 2005 Banff Centre Workshop for Jazz & Creative Music, the 2006-2007 BMI Jazz Composers Workshop, and the 2007 Red Bull Music Academy. Through these endeavours, he has been mentored by such diverse talent as Dave Douglas, Jim McNeely, Michael Abene, Jeff Parker, Om’Mas Keith and DJ Zinc.

The Mexico-born, Quebec-based artiste Gitanjali Jain Serrano studied the arts, during a stay in Paris. She might have done so to tell the story of her great-grandfather, General Francisco Roque Serrano. To do so, she chose to use texts of Mexican poet Francisco Serrano and joined the composer /pianist David Ryshpan to create this multi-disciplinary show. Through poetry, music, dance, and other visual elements, she provides a glimpse into the life of her illustrious ancestor. It is an attempt to tell the story of the famous general who was brutally murdered by his opponent during the presidential campaign in 1927.