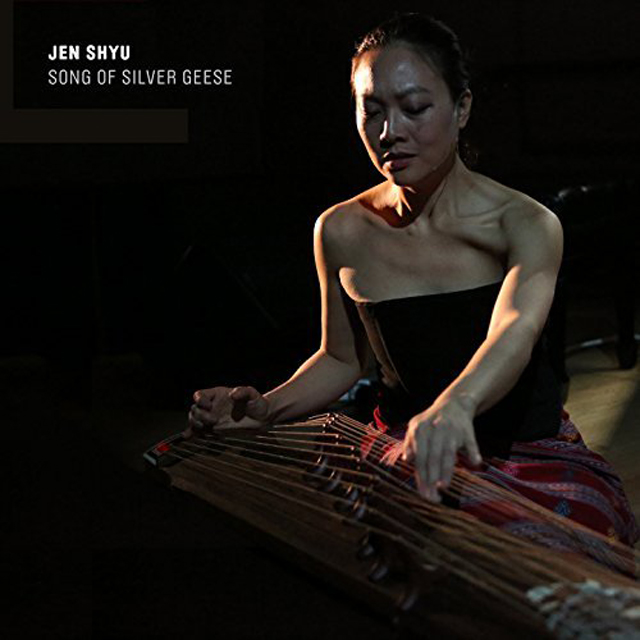 Although the booklet note at times might come close to suggesting that Song of Silver Geese by Jen Shyu is a simple tale of life and death, it is anything but simple, or even as linear as the line that drives the human being from life to eventual death. But the journey between life and death often isn’t exactly cyclical either. Rather is its linear, cyclical; sometimes parabolic and what’s more, that often bears the mark of the jagged edges of shattered glass. And Miss Shyu paints a heartbreaking picture of its translucent mystery ever so sensitively and with such utter and heroic beauty that it may easily be discerned as a tale of epic proportions.

The story – two parallel ones, actually – and even has some similarities with the Greek tale of Orpheus and Eurydice, especially in the descent of the character based on the real-life six-year-old Nala, the only survivor of a tragic accident in which she lost her entire family. Miss Shyu imagines the child on her journey to the dead in search of (and here is where the epics diverge) an elixir that will give life back to her family who perished in a tragic accident. The story of Nala has more in common with the Timorese legend of the warrior Ho’ar Nahak Samane Oan who disguises herself as a man in order to journey to the dead. The vocal parts are sung in a English and a Timorese dialect, native to Miss Shyu who magically transforms herself into not only multiple characters, but also mythological figures inhabiting multiple mythologies all at once – each more vivid and fascinating than the other.

This is a very special original work, written for singer, western and Asian instruments and a dancer who must also inhabit multiple (male and female, or androgynous) characters as well. Song of Geese is, quite simply, a masterpiece. It is quite unlike anything that has been attempted in any of the artistic realms that it inhabits – from narrative, epic and lyric poetry to a panoply of music from improvised Jazz, traditional Korean, Timorese and Chinese music and dance, as well as modern dance. And it is brilliantly performed by Miss Shyu and, of course, the group of musicians who accompany her on this breathtaking journey. The musical colours are vivid and nothing can prepare the listener for the staggering array of musical textures that arise from a multitude of musical instruments from the West to East.

But it is Miss Shyu who absolutely steals the show with the transmogrification that comes from playing so many fascinating and multi-linguistic roles as singer, narrator and finally as a virtuoso instrumentalist on the traditional Taiwanese moon-lute as well. Although we are missing the dimension of the dancer, Satoshi Haga, who is listed as co-director, choreographer and dancer – (where is the necessary DVD here?) we are still treated to as near an experience of what a full-blown multimedia presentation would have been like from the vocal and instrumental soundtrack by the prodigiously-talented and evanescent Miss Shyu.