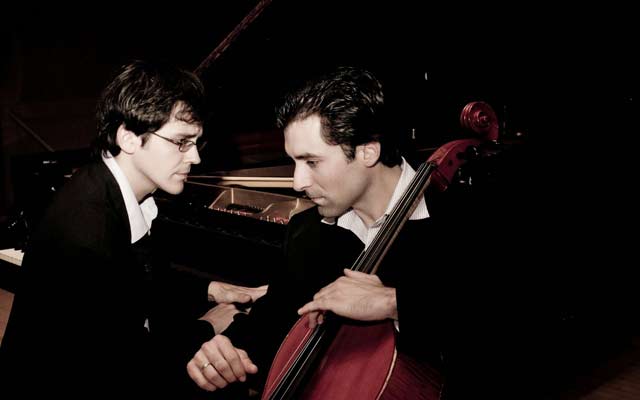 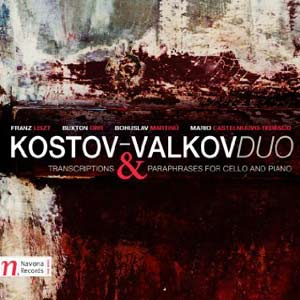 These performances exhibit that feeling of spontaneous enjoyment which animate the Kostov-Valkov Duo’s live performances wherever they go – from Europe to Japan. Their playing is constantly graced by small touches of rubato, never very much but enough to give a sense of freedom and individuality to each phrase. Half of this extraordinary programme is Liszt and the performances of the Hungarian Rhapsodies 1 and 2 as well as Evocation á la Chapelle Sixtine benefit especially from strong characterisation; the quick mood changes of the Rhapsodies are caught in a delightfully precise, vivid manner. The fine performance of Evocation, naturally less fun, but benefit hugely from Kostov’s warm expressive tone, and at a slower tempo, bringing out more strongly the profoundly beauty of S461’s graceful upswing.

Throughout the programme, that not only varies dramatically in eras of music, the Kostov-Valkov Duo perfectly combine emphasis on the music’s lyricism with the sense of Liszt’s allegro moderato in the Evocation. Neither Kostov nor Valkov are afraid to play very quietly. The effect can be magical as at the start of the Carmen Fantasy, for instance. But listening to the whole set, I feel I’d welcome more passages of full unconstrained expression. My wish, it appears, is always answered by some genie popped out of a bottle. For, often quietude is followed by almost visceral pianissimo, as in the midsection and the finale of the Fantasy. I have to admit, though, that these tenuous passages as those mentioned earlier do sound beautiful and touching.

The performances of the virtuoso Rossini and the Figaro are exhilarating; the Rossini variation combines a lively momentum with a sense of statuesque poise. And the Figaro paraphrase is beautifully characterised in all its varied aspects. But I go back to that which eventually contributes to the memorability of this disc, which are the Hungarian Rhapsodies 1 and 2. These are full of energy and grace, and the barnstorming finale of No. 2 rivals the most famous ones performed by the great György Cziffra, whose hair-raising No. 2 is often referred to as one of the greatest in Lisztian history.

Cellist Lachezar Kostov and pianist Viktor Valkov have performed together for more than 10 years and have appeared at concert venues in the USA, Germany, Italy, and Bulgaria. In 2002 they were named winners of the “Grand Prix of the Music and Earth Competition” in Sofia, Bulgaria. After their early success the Duo performed a series of thematic concerts devoted to the music of Hungary, France, Germany, and Russia. Prior to establishing themselves in the USA Kostov and Valkov appeared in several European festivals, such as “Russian Music Days” in Dortmund, Germany. Read more…