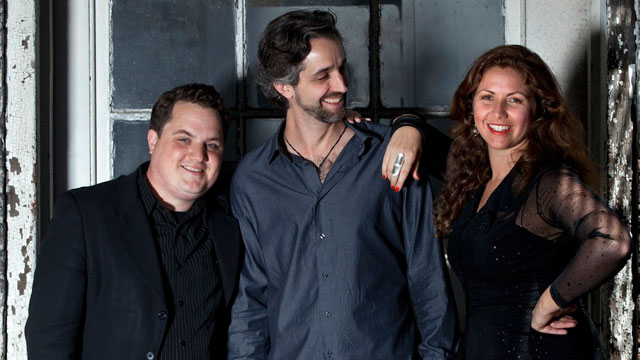 It might be interesting to know how many thousands of notes Mike Eckroth plays at any given time. Each of the ten works calls for an artist who has no fear of cascading passagework and acrobatic leaps. Likewise, Jason Ennis sounds perfectly at home with virtuoso novelties which are probably known to few musicians other than intrepid guitarists. And all of this is gloriously crowned by the melismatic lines sung by the Chilean-born vocalist Natalia Bernal. As a result there is a great deal of charm to be found in the repertoire, which explores, among others, the Brasilian idioms of Milton Nascimento and Guinga, and Billy Strayhorn and Duke Ellington, and Stevie Wonder—some of the century’s most significant composers and musicians. It all adds up to a majestic, exuberant ride as La Voz de Tres paint the music with all sorts of colours providing the trio and guests with a glittering showcase. The disc’s ear-opener is Milton Nascimento’s “Milagre dos peixes” which exudes bountiful excitement and lyrical ardour. The recorded sound is also excellent, so no need to turn up the volume in order to appreciate the fervour and dynamism that La Voz de Tres brings to this disc. 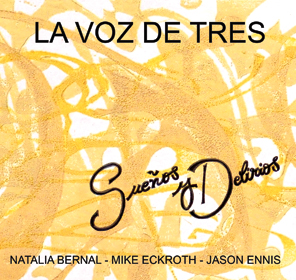 While they were putting together this music through a crowd-funding source, the group suggested that this would be a singularly breathtaking collection of music, to which I might add that this is a disc which iridescent music is transformed—with a breath, a word, a single musical note—into something quite transcendent; even spiritual. This is no exaggeration. The music and performances keep you transfixed, whether for spiritual or sonic reasons. Three selections—the one written by Milton Nascimento, the other one by Guinga’s and Billy Strayhorn’s piece—by this conductorless ensemble put a vital new spin on older music. The unison of words and music become communal celebrations as shaped by these superb musicians. The newer one, “Vagalume”, by Mr. Ennis is given nuanced life so much so that the juxtaposition of music and lyrics is absolutely divine and the end result is sheer vivid and palpable exhilaration.

The rest of the works also conjure up the ecstatic by building rhythmic momentum on increasingly propulsive phraseology. Some of the other contemporary classic fare explores a spectrum of moods, (some) adding saxophone and cajón, the former instrument engaging in activity that is both introspective and wailing. As musicians La Voz de Tres truly soar with their guests, the ever spectacular Michael Zsoldos and Yayo Serka. These performances are more than memorable. The music of La Voz de Tres has a tremendous attitude which suits the group’s cool jazz-influenced musical sensibilities; they react quickly to the music’s sometimes audacious shifts in mood and get to display their very outstanding chops. It’s hard not to believe that the group is going to have to pull a rabbit out of a hat to top this record—even in the far, far future.