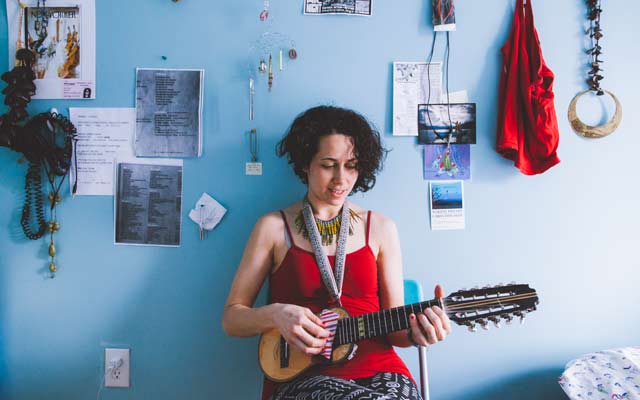 Listening to Monique Mizrahi you are shaken to the very core of your being. Something resembling a musical collision is taking place not unlike the shifting of tectonic plates, which can often mean that a tsunami is coming. That is what David Bowie sounded with each chameleonic change of voice. Now it’s happening again, this time with Ms. Mizrahi. The multi-talented, multi-instrumentalist and enthralling vocalist is like the proverbial Spiderwoman, who lures you into her web from where you cannot ever leave. And this is how you will want it to be. So irresistible and sensual is Monique Mizrahi that all she needs is to utter a word, perhaps even a breathtaking sound and you have fallen for her beguiling spell. 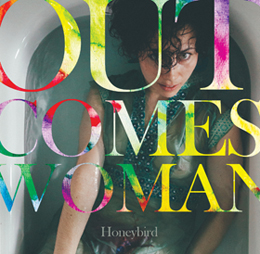 Monique Mizrahi plays a rather odd combination of instruments. Fancy finding a musician who plays “charango” which is a Latin American instrument and “electric bass” which is, in turn, a pan-European-American instrument. And fancy finding a bewitching woman who casts her spells in English, but evokes a myriad tongues and sensibilities with her smoky voice. And now you may accuse her of musical entrapment. But platitudinous praise aside, Monique Mizrahi is an accomplished vocalist, with a fabulous three octave voice, which she can use to soar like an elegant bird and swoop down like a denizen of a forbidden place. She makes the same kind of magic happen with her charango where her playing is at once rocking in an Afro-Caribbean manner, while recalling the mystique of a western European lute. Just like her vocals, Monique Mizrahi’s instrumental prowess is one of a kind. Lines dart and swerve in their own illusive manner. She lopes and darts like a deer gone mad with the smell of rain. And yet, through all of this Ms. Mizrahi is as elegant and melismatic as a diva in a concert hall.

None of this might seem to “fit” the hypnotic character of Out Comes Woman which is smoking and almost in-your-face. It has every right to be. Monique Mizrahi is socially aware and committed. Songs such as “TMBLGBT” and “Angola” give the game away as does her somewhat whiplashing voice. To be socially aware in this day and age is to be politically correct. Monique Mizrahi does not appear to be constrained by that. So whilst being lyrically pure musically, her lyrics might be just the opposite – risqué and not always on the right side of political correctness. After all this is true calling of every artist—man and woman. It takes a real talent and canniness to make this happen. Judging by the state-of-the-art of Out Comes Woman Monique Mizrahi has oodles of both.

Honeybird (multi-instrumentalist singer-songwriter Monique Mizrahi) has honed her instinct for finding sweetness in unexpected places, like her winged namesake. From her California roots and early love of punk, coming into her creative own in Rome, Italy and now Brooklyn, Honeybird has chased more powerful engagement with her identity–as an artist, as someone bisexual and cross-cultural–and deeper engagement with the world’s music.