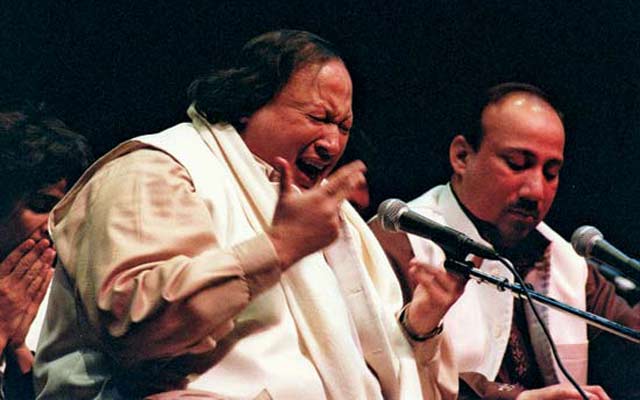 The six selections recorded in 1998 constitute one of the classic dates that Nusrat Fateh Ali Khan had in the RealWorld Studios. In fact this performance could very well be one of the finest of his recorded career. Although they do not include the Sufi star’s most notable songs, the repertoire is certainly among Nusrat Fateh Ali Khan’s most definitive. It is true that the Qawwali singer could summon something from the depths of his being every time he performed, but he never attributed his musicianship to human qualities. In fact, as most Qawwali performers do, he always acknowledged that he was made to sing. This is a characteristic of the Sufi tradition as well, that they sang as if they were led to a rarefied realm by Divine power. This is certainly true of Nusrat Fateh Ali Khan. 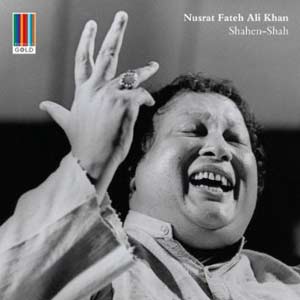 The disc is most appropriately titled: Shahen-Shah, which means King of Kings. This was also a title given to Nusrat Fateh Ali Khan and indeed he was the King of Kings of Qawwali music. His springwater-fresh voice is emotionally vibrant and because his range is so fabulously and almost impossibly broad, he dips into a palette that is also larger and more colourful than almost any other singer of his genre that ever lived. His performance throughout is spirited, at times even sprightly; the ululating sections fairly trip along like so many hosannas and are almost too breathtaking to the listener. Never forget, however, that this is Sufi music but even so there can be few more raptly compassionate statements by a Sufi musician than these by Nusrat Fateh Ali Khan.

The music here is keenly poetic, at times daringly spacious and shrewdly observant. Both commanding in technique and golden in tone Nusrat Fateh Ali Khan possesses the sublime gift for illuminating the text and his involvement is also total; indeed his heart-rending delivery of the transcendental lyrics combined with an unforgettably poignant switch from minor to major key and back again never fails to bring a lump in the throat. No one – and I mean no Qawwali singer past or present – displays a greater understanding of the music’s organic flow. In fact his performances of the spiritual material is marvellously perceptive (as always), and in my experience (of his music) never sounded more arresting than here.

Riches aplenty, then, and the especially majestic performance of the second track, which is surely also the icing on this many-tiered cake. And then there is this: Nusrat Fateh Ali Khan also draws a thrillingly fervent and superbly confident response from his meticulously prepared musical cohort. Top-notch production and a truly visionary performance from its star set the seal on an unmissable release.

Nusrat Fateh Ali Khan (13 October 1948 – 16 August 1997) was a Pakistani musician, primarily a singer of Qawwali, the devotional music of the Sufis. Considered one of the greatest voices ever recorded, he possessed an extraordinary range of vocal abilities and could perform at a high level of intensity for several hours. Extending the 600-year old Qawwali tradition of his family, Khan is widely credited with introducing Qawwali music to international audiences. He is popularly known as “Shahenshah-e-Qawwali”, meaning “The King of Kings of Qawwali”. Read more…