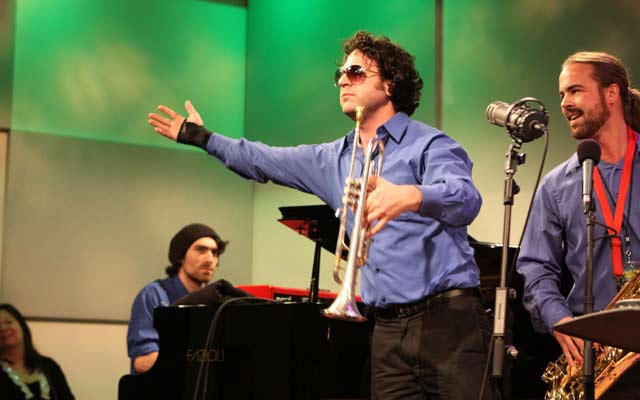 Musicians as disparate in style – Duke Ellington and Cecil Taylor – have insisted that a listener must be compelled to dance to music. That thought comes immediately to mind when I put on this record to listen to because the irresistible urge to dance took over my normal reservations about frenetic activity. In the privacy of my home/office I usually encourage myself to dance to all kinds of music with all manner of imaginary partners. But this is one time I was happy to dance alone. The infectious joie de vivre of this programme makes this reaction easy to comply with. Another thought: I know that ‘boogaloo’ is has been an acceptable word; a dance… whatever. But to me it’s all about the Afro-Cuban polyrhythmic idiom. 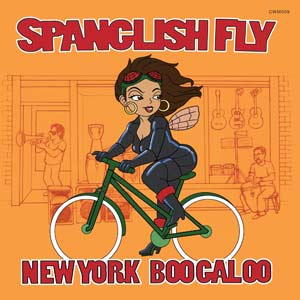 Having got that off my chest, though, I have to admit that New York Boogaloo is one heck of a record. It is both visceral and effervescent. What I love most of all is the fact that this music is seriously good – the name of the group, Spanglish Fly notwithstanding. It is easy to catch on to the reference. Who can forget Terry Thomas and his riotous performance in Spanish Fly, that hilarious 1976 movie about the misanthropy that comes into play when he is inadvertently administered a potent dose of the aphrodisiac? And even if you do not accept this reference then how about “Spanish Fly”, the brilliantly coloured Green Beetle? How about the fact that this music is a serious musical aphrodisiac? And if that is too inappropriate, then let’s stick with “Spanglish” a word combining Spanish and English. The very thought of the collision of idioms and metaphors of the two cultures is both hilarious and memorable. Just like this music.

Jonathan Goldman is well-known for his deep love and extraordinary understanding of the Afro-Cuban idiom. He is also adept at engineering a nuclear reaction between that culture and the swinging, jazzy culture of New York. And he has practiced the art of music for decades in and around New York, flying off to somewhere far off to spread the “Spanglish” gospel. Here, however, he would be deemed to be preaching to the choir. I number one among his legion of fans because unbeknownst to many of the prissy cognoscenti, Mr. Goldman is not merely clever, but intuitively brilliant as well. It shows on this record. How else would one explain his irreverent turn on “Esta Tierra”, that near sacred “Spanglish” version of the Woody Guthrie classic?

It is hard to ignore such ingenuity from then on. There are no low points on the album, only peaks and no troughs. The one and only instance when I am prepared to ignore the bit about the ‘boogaloo’- it’s a dance from the ‘50s New York danced on every streetcorner, for crying out loud – is the hilariously-named “Martian Boogaloo”; as if that were in anyway different from a “Brooklyn Boogaloo”? But enough flippancy; this is a seriously wonderful record, full of spectacular, raucous musicianship – a very high quality of musicianship I would add. Not only is Jonathan Goldman the epitomé of Afro-Cuban red-hot, but he and his cohort would make even the great Tito Puente proud. This band swings ebulliently. And as it does, so also does the music make a lasting impression on body and soul.

Spanglish Fly is New York City’s only band dedicated to reviving and renewing the music known as Latin bugalú or boogaloo, the sound that sprang from the street corners, the transistor radios, the pool halls and the clubs of 1960s Spanish Harlem. Featuring 11 members with origins in Puerto Rico, Cuba, Ecuador, Venzuela, Canada, “Loisaida” and Upper Manhattan, Spanglish Fly comes together to play the mixture of soul, r & b, and Latin rhythms that was born in El Barrio. The band’s live shows are explosive Latin Soul parties with packed dance floors. Read more…