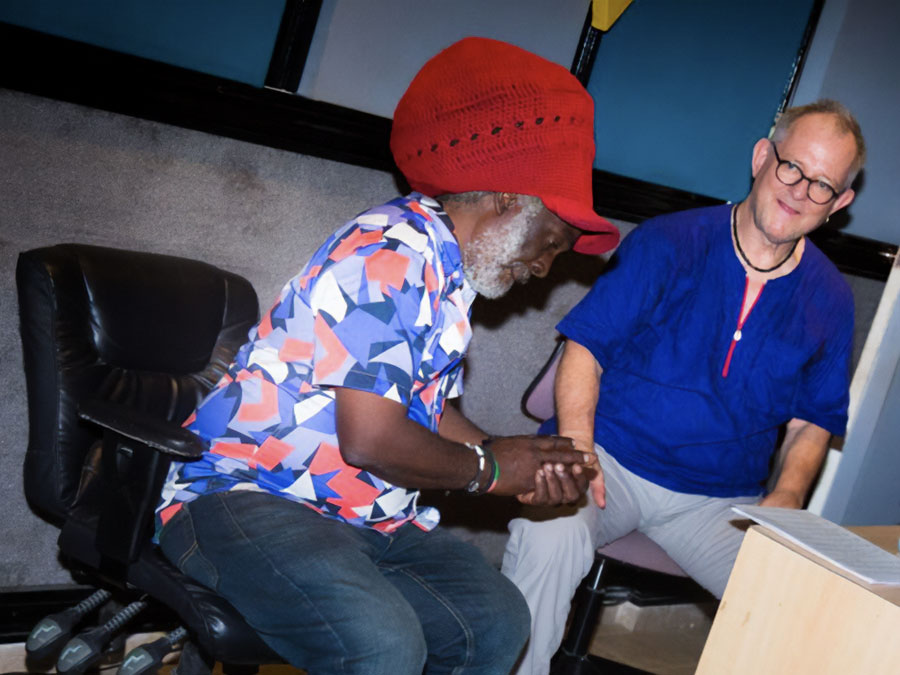 This recording – Mapou, featuring the Haitian-Swedish-Swedish-Haitian brass, woodwind and percussion orchestra of Sten Källman and Sanba Zao – is one of the most electrifying recordings you would have the distinct pleasure of experiencing. It is a stunningly brilliant artistic collision between two eloquent musical cultures – Western and African. But what is most unique about this is that it brilliantly re-inhabits, in the most sophisticated and modern manner, two undeniably ancient monophonic traditions of African and Western spiritual music. But with ingenious arrangements by Sten Källman, the two musical cultures meld into something that – despite eschewing by their very nature the vertical aspect of [polyphonic] harmony, still manages to present one of the most startling experiences of what can only be described as symphonic harmony.

It is impossible to overstate the difficulty of bringing these two soundscapes together. First there is the seemingly insurmountable difficulty of melding the multitudinous [relative] pitches of bras and woodwind instruments with the echoing gravitas of African drums. Bringing the bell-like soaring and swooping upward and downward flights of music wrought from metal instruments redolent of ululations and tintinnabulations of trumpets, trombones and soprano, alto, tenor and baritone saxophones not to mention flutes and clarinets and bass clarinets, the growl of the tuba, with the depth-defying gravitas of earthen drums born in the womb of the earth. Sten Källman is a master of this kind of glorious union of sound and you get a taste of just how he makes this happen with the human voices heard [and viewed] in this video of “Wongol”, Mr Källman’s Afro-Haitian arrangement of a brilliant work is performed by the Saint Anthony Village High School Chamber Choir, conducted by Michael Shafer.

Mr Källman has benefited enormously from his love for and decades-long love for Haitian music. He has spent much of his studying it in Haiti. What he has now produced on Mapou can not be born of knowledge alone; it must be wrought by sustained passion and a desire to penetrate the most ancient secrets of communing with God through the most elemental of gifts – the human voice. This is what Mr Källman has poured into the music of Mapou. Of course, none of this would have been possible without the supremely musically erudite percussionist Louis Lesly “Sanba Zao” Marcelin, who is not simply musically proficient, but a spiritual adept in the truly African sense of the term. His “nearness” to “the source” of music [which is supernatural] helps enjoin Mr Källman and the rest of the musicians with the most supernatural of all sources of music – indeed the very elemental source of sound itself.

The music is ensconced in the metaphor of the Mapou tree, a sacred icon that takes a vegetative form, housing earthly spirits that connect human life to their most ancient spiritual ancestors. What is special about this connection is not that it is spectral as much as it is palpable; part of a belief-system that originated in Dahomey and was carried by the men and women on slave-ships, to be preserved in all its ancient glory through generations of sainted musicians in long-suffering Haiti, through the mighty Kase Dawomen and Vodou Double Nago rhythmic patterns.

Magically, of course, Mr Källman finds secret passages within the percussion colours of this Afro-Haitian music that opens portals into the music of his own childhood – in the waltz and polka forms native to Sweden. And so, from out of the mists of time we are seduced by the [Vodou Double Nago] of “Dance of Darkness-Svarthalling”, the boisterous ebullience of the [Raboday] “Kanaval & Jubilation” and of the dizzying majesty of “Magdalenapolskan” re-imagined in Menwat-Dioumba and traditional Swedish rhythm. Everywhere in this dazzling repertoire [and best of all], melodic inventions intertwine with the thundering rhythms, seemingly from the heartbeat of all human music, which somehow – across oceans and continents and disparate language – comes together as if in the one language, which with the sound music, unites all of humanity.

This is the genius of Sten Källman; that he is able to create music with brilliant Haitian artists led by Sanba Zao in praise of the spiritual gifts of Mapou. But more than anything else this music reminds us that as a humanity we are affianced to but one feeling – and that is “Hope”; the one aspect of life that has enabled our species to survive for 6 billion years. And this is so evocatively ennunciated in this music… enunciated with great passion and deep emotion on an album to die for…