Two Tuareg musicians and guitarists, Liya ag Ablil (aka Diara) and Sanou ag Ahmed, two Frenchmen, Andrew Sudhibhasilp and Nicholas Grupp, on bass and drums respectively, together with their inspiring English producer, Justin Adams may make up this band, but the music is unmistakably and uniquely Tuareg, from a region in South Algeria and Northern Mali. They bring a gorgeous and incredibly authentic swing that is distinctively African – Algerian/Malian to be precise. While the term ‘African Blues’ seems to be the easiest way to describe the musical flavour, there is something much richer and matchless, and although the word ‘blues’ fits perfectly the music devolves into a camel-caravan-like swing to such an extent that all norms of musical contours blur. Even in the blues aspect of this Tuareg music, the twanging sound resembles more the early ‘folk’ blues of the delta than any other music that you might be even remotely used to. 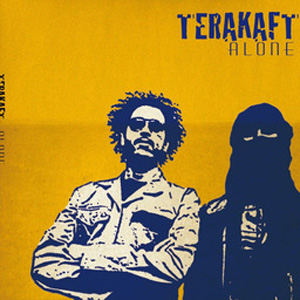 Alone is an elementally melancholic album, spun from griot music – stories told by rambling musicians that create both a magical and a mystical effect on the mind of the listener. Diara and Sanou, the Tuareg guitarists have mesmerising voices. Put this together with wailing guitars and you have music like you have never heard before – even from Ali Farka Touré, or even the Tinariwen, a Malian band that spawned Terakaft under the stewardship of Diara and Sanou. Their music is an impressive study in blues and roots. Anabayou, a song played twice – first as an ensemble piece by the quartet and as a solo bookend. The music of this piece is pivotal to understand and appreciating the high and lonesome found of Terakaft.

All of the repertoire of this short album has a vividly different style, contrasted and conveying the exhilarating sweep of the Sahara. The bubbling, insouciantly rhythmical ballad Itilla Ihene Dagh Aïtma is followed by the barcarolle-like Oulhin Asnin, which is bitter-sweet and lyrical. Lyricism is the essence of this music and all of it impresses more as an expressive study than a technical feat. There is something of a miracle as to how simple and direct melodies can be held together by such loose and long-limbed rhythms But everything is magic here and the remarkable music beautifully mimics the searing intensity of the desert, its whispering and howling winds, the whipping sand and the gentle loping of the camel as it guides the caravans across great expanses of golden-brown landscape. While you, the listener is mesmerised by this spectacular music.