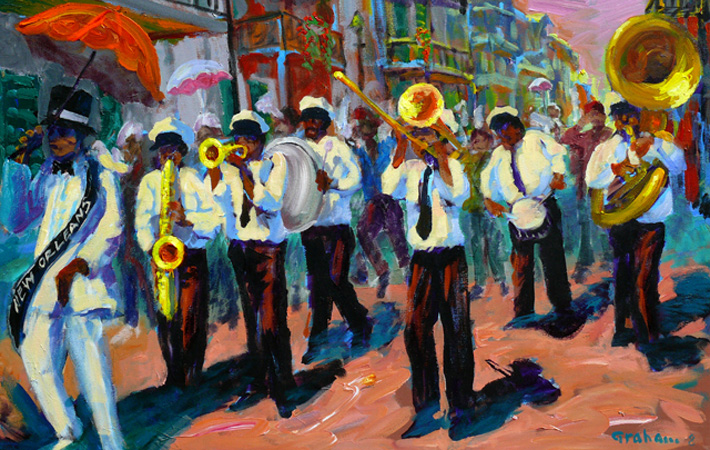 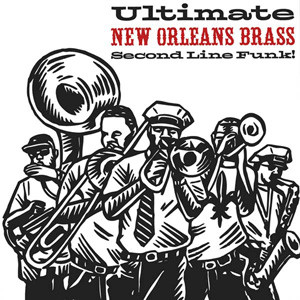 Warren Hildebrand and his father Henry Hildebrand, are legendary and seminal figures in the promotion of New Orleans Second Line music and music in general, from New Orleans (in addition to others, of course). When Henry Hildebrand was alive and kicking he ran one of the largest and finest wholesale outfits All South from a warehouse in NOLA. Mr. Hildebrand did not stop there; he retailed the music that he wholesaled, manufactured it and produced it, published and promoted it. The 60’s were halcyon days for the business which was ultimately taken over by Warren Hildebrand, when his father died. The ensuing decades saw many ups and downs and changes and in the present day one of Mr. Hildebrand’s flagship is now Mardi Gras Records. This present collection, Ultimate New Orleans Brass – Second Line Funk!, is culled from a catalogue that is 1300 titles strong and counting. It features the work of six brass bands each of which is in a class of its own. Upon sampling these charts from each of the bands, it would be interesting to hear full albums of each group, or better still videos of them actually performing—in the event that they do—on the streets of New Orleans. After all that is really the best way to experience Second Line Funk.

Still this album is perhaps the best introduction that a listener can get to what goes on in that fabled city, which has seen so much trial and has yet to recover from Hurricane Katrina. The charts might seem like they are repetitive, but upon a careful second hearing, the extent of syncopation and innovation will be more subtly revealed as if the peeling away of a fabled skin is taking place. This will show the elemental differences between the groups. The Rebirth Brass Band, for instance, while never being a throwback, is perhaps the most traditional of the bands. Soul Rebels, Lil Rascals and Hustlers Brass Band are more revolutionary, while keeping in mind the traditional Second Line marching band front and centre; they seem to have revolutionised the core of the music by adding funk and soul elements to the charts they invent here. The New Birth Brass Band is a revivalist movement. Its constituents seem determined to keep traditional elements such as Second Line marching with newer metaphors such as rhythm and blues and soul. Olympia Brass is one of the longest standing Brass Bands in New Orleans. Its first incarnation goes back to the 19th Century through to World War I and its most famous member was the great Freddie Keppard. In 1958, the saxophonist Harold Dejan split from the second unit of the Eureka Brass Band to form the current Olympia Brass Band. But the true revival came when the great jazz guitarist Danny Barker returned from New York to New Orleans and founded the First Baptist Church and made marching bands what they are today, with dignity, drama and cultural sophistication.

Such heritage seeps into the music which is full of wit and wisdom and showcases the deep roots of jazz that grew out of the mythical figure of Buddy Bolden through Louis Armstrong, King Oliver and a host of other magnificent early innovators who made jazz such a truly African American music.

Track List: Do Whatcha Wanna; Feel Like Funkin’ It Up; Casanova; Let Your Mind Be Free; Knock With MW, rock With Me; It Ain’t My Fault; Gazing In The Grass; Olympia On Parade; Apache; The Second Line; Mardi Gras in New Orleans; Who Dat Called Da Police; I Feel Like Busting Loose