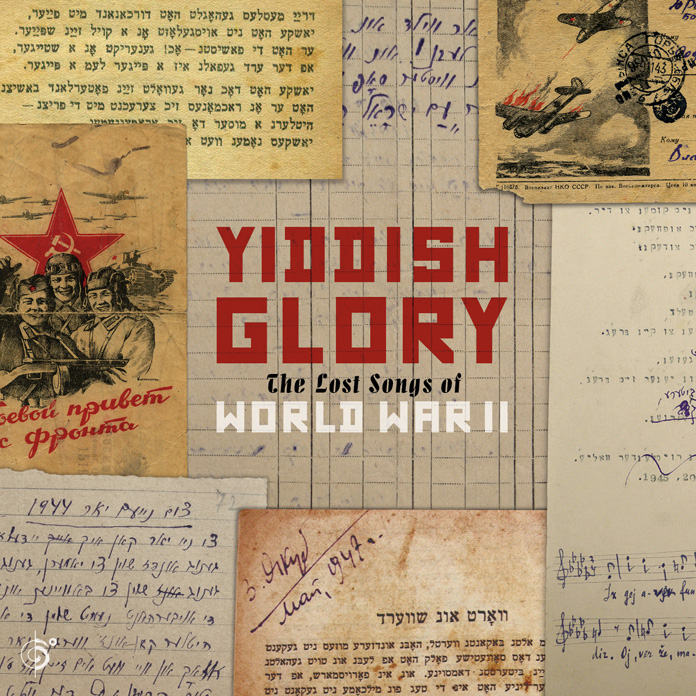 It is one thing for a culture to survive torment, repression, and genocide as the European Jews did throughout history – especially during and after World War II – but to turn that suffering and death into a victorious music is something quite magical. It is also, as the title of this disc suggests eminently “glorious”. The music of Yiddish Glory: The Lost Songs of World War II is just that kind of triumph; a palimpsest set to music by Soviet Jewish composers who we now know to be legendary, both in courage and talent, and who join classical composers such as the great Szymon Laks (1901–1983), whose monumental work deserves praise and preservation.

The music of this disc is by turns charming, charismatic and evocative in its own way, but almost nothing can prepare you for what you will end up listening to. All of the pieces –whether sung by the inimitable Psoy Korolenko and Sergei Erdenko or the incomparable Sophie Milman – share a complete sureness in their respective musical identities; no gimmicky effects, no quotations from the past, just going to the poetic essence of the text at hand. Drawn from experiences under the repression of both Hitler’s regime and Stalin’s as well they are meditations not only on grief but, more importantly, the triumph of human endeavor and survival that came out of it.

Composers use Yiddish idioms in personal, candid ways that examine the pain of abandonment of the Diaspora with resignation and with humour rather than with histrionics, reaching beyond mere heartbreak and existential crisis into ultimate ebullience and unfettered joy. Some moments have cinematic shifts in instrumental colour as the words veer between imagination and hallucination, and go from the emotions of ink-black darkness to bleach-out sunshine. But always – temperament and history apart – the music lands in the angular, rhythmically vital world of what is rightfully expressed as Yiddish Glory mixed in with poetic evocations of this unique experience of the human condition.

It’s here, on “Taybls Briv (Taybl’s Letter to her Husband at the Front)”, for instance, that the song cycles courageously explore the existential overdrive that’s a side-effect of grief and where it can take you. The nostalgia of “Tulchin” and “Four Sons” complete the dramatic, emotional arc and take you on the journey of awe, the former with the breathtaking vocals of Miss Milman couched in a fragile vibrato, magnificently accompanied by Mikhail Savichev on guitar. There is much more in terms of instrumental ingenuity to be seduced by; David Buchbinder’s forlorn trumpet on the opening track, for instance, the violin and piano of Artur Gorbenko and the violin virtuosity of Sergei Erdenko among other wonderful performance.

Daniel Rosenberg’s monumental production has also been exquisitely captured in a warmly immediate recording, which becomes an essential addition not only to the library of Yiddish music, but it is also an important historic document as well, which all the time, makes one feel as if one is part of an immediate history as if it’s unfolding in the moment.

Black Uhuru: As the World Turns