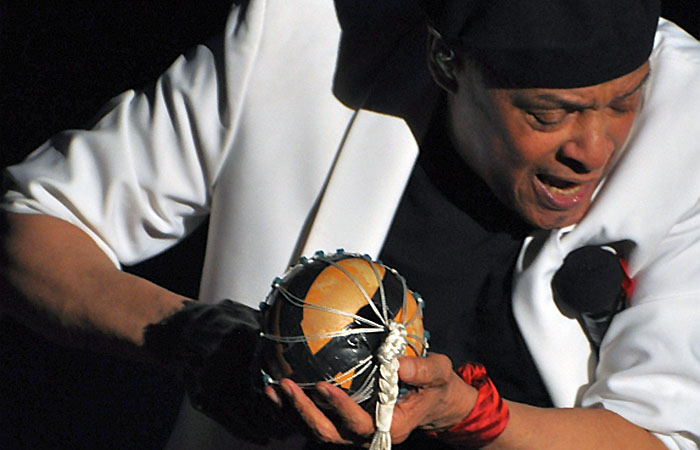 When the lineup for the new season at the Markham Flato Theatre in Markham was announced in the spring of this year, the biggest wave of excitement was created when fans of Al Jarreau found his name on the list of performers. As it was the only show in the Toronto area, anticipation was building to the boiling point before the show on November 6th, 2013.

The theatre was bursting at the seams completely sold out, and without long introductions and opening acts Al Jarreau took over the stage.

There was no doubt about who was running the show. With the first sounds of his unique voice the groove wave hit the air and bodies started to sway and jump.

Being in his early 70’s Al Jarreau hasn’t lost a bit of his energy, giving the audience exactly what they came for, singing his best known songs, mixing up the standards with his unmistakable sound and vocal versatility.

Immediately establishing a contact with the audience, Al Jarreau was telling the stories, sharing opinions, getting people involved in singing along and even commenting on local events.

The playlist covered most of his hits from Cold Duck to Spain, including standards as Midnight Sun and, of course, We’re In This Love Together. Brazilian sambas Agua De Beber and Mais Que Nada were a perfect tune up before his upcoming performance in Brazil.

Working with the same band for many years, Al Jarreau very generously gives a lot of space to his band’s members so they can show their skills and talent, instrumentally and vocally.  A duet with Chris Walker was outstanding.

With a highly regarded profile in the industry, seven Grammies in three different categories – jazz, pop and R&B, it was great to see how open and approachable Al Jarreau is, coming down to sign his CDs after the show.

This was a real treat for his fans and an unforgettable evening.

Audio interview with Al Jarreau on the Sodajerker on Songwriting podcast

Review and photos by AtaelWeissman