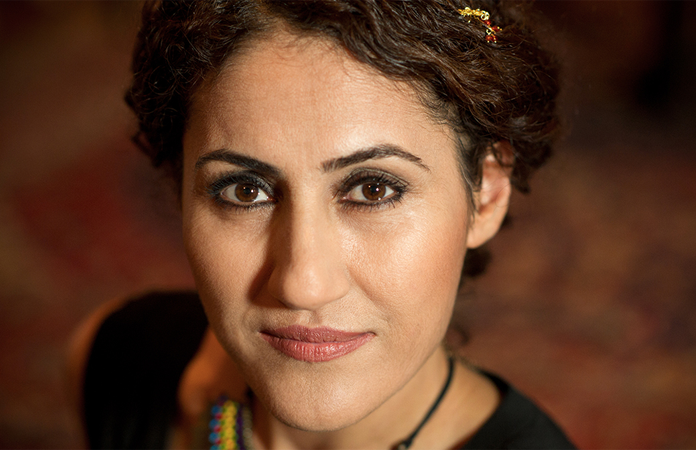 “To hear Aynur’s voice is to hear the transformation of all the layers of human joy and suffering into one sound. It reaches so deep into our soul, tears into our hearts, and then we are for one moment, joined as one. It is unforgettable!”—Yo-Yo Ma

Since the country of Kurdistan does not exist, all Kurds technically live in exile. Exiled from Turkey due to her outspokenness on Kurdish issues, Aynur Dogan knows what it is to take risks for her art. Now living in Holland, she continues to bravely speak out; as a voice for her people, she is devoted to preserving Kurdish musical traditions.

Aynur Dogan was born in the Dersim region of eastern Turkey. She has collaborated with a range of acclaimed artists including Yo-Yo Ma and the Silk Road Ensemble, Kayhan Kalhor, Javier Limón, Kinan Azmeh, Mercan Dede, Salman Gambarov, and many more. She appeared in The Music of Strangers, a 2015 documentary about Yo-Yo Ma and the Silk Road Ensemble. Her vocals have been described as carrying “the feelings from smoky mountains, wild rivers, the sun and it carries the beautiful smell of earth. Her voice is so impressive much like nature itself.”

Tembûr player Cemîl Qoçgîrî was born in Germany into a Kurdish-Alevi family from the region of Qoçgîrî in Dersim, Turkey. He has collaborated with Kayhan Kalhor, Salman Gambarov, Kinan Azmeh, Morgenland Chamber Orchestra, Netherlands Blazers Ensemble, Mikaîl Aslan, among others. He has released five solo albums and his fifth, Zalâl, consists of songs in Zazaki, one of Mesopotamia’s oldest languages, which UNESCO described as “threatened with extinction.” The album ranked among Transglobal World Music Chart’s 10 best albums of 2017.

Pianist Salman Gambarov was born in Baku, Azerbaijan, and graduated from the Baku Music Academy with a degree in musicology and later received his composition degree.  Working in various styles, from post-bop to ethno-jazz, Gambarov has performed at a range of international festivals, including Montreux Jazz, Cassel Music Days, Beethoven Festival, Zelt Muzik Fest, Morgenland Fest, and more.

This season, performing arts presentations have been curated to feature acclaimed artists who have transcended fear through their art. Under the banner of “the other side of fear,” we explore the definition of fear, what it means to face fear, and how we attempt to define, confront, and conquer fear in ourselves and others – or, in Dogan’s case, being feared as ‘the other’.

Dancing in the Park: On Stage with Colectro and Noventa Dance Projects