If you are new not just to the kind of Carnatic (South Indian) music on the Aditya Prakash Ensemble’s Diaspora Kid, but to Indian music in general then you could most certainly be forgiven. First of all the Indian subcontinent is so vast, with cultures so varied across its geography that even an relatively new aficionado of Indian music can be lost initially. Not only would instruments, melodies and the complex rhythms bemuse the ears, but because they are so intimately connected to philosophical and religious concepts rooted in the vast and varied intellectual soil of the country but they also have little to do with western approaches to time, matter – and even reality.

But Indian diaspora has spread rapidly and wide across the world and because old roots run deep these continue to be fed by the life-giving waters of all things that run sacred and secular even if from the faraway home country. Also, the notion that Indian music can be equated with what has been heard in Bollywood films no longer holds any water. All of this because generations of Indian musicians from Wajid Ali Shah, Veene Sheshanna and Rabindranath Tagore, Ustad Bismillah Khan, Pandit Hariprasad Chaurasia, Pandit Ravi Shankar, Ustad Alla Rakha, Ustad Zakir Hussain have carried things from the 19th and 20th centuries into the 21st century and no matter where an Indian musician is located on the planet, he or she – if schooled in the Indian cultural tradition – will always carry this with them – just as younger and incredibly-gifted diaspora of musicians such as Anoushka Shankar and Aditya Prakash, who fronts his own, Aditya Prakash Ensemble.

So it is hardly surprising that a musician such as the latter – vocalist and composer, Aditya Prakash – who was raised in Los Angeles, should be writing and performing music such as that which is in the repertoire on Diaspora Kid. And yet, if you dig a little deeper, you might hear how subtly Mr Prakash has woven new melodic and harmonic threads into his highly original music, which at the same time is fed by the proverbial living waters of the South Indian, Carnatic tradition. Some of these aspects of Mr Prakash’s musical heritage may be easier to spot – such as Sumesh Narayanan’s mridangam on (Mr Prakash’s) “Roots (Ramkali)” or BC Manjunath’s konnakol on his (Mr Prakash’s) “The Warrior”. 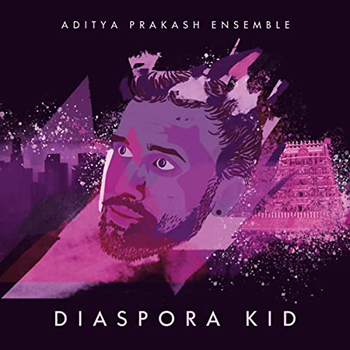 The deep and resonant sound of the mridangam, after all sounds like no other drum on the planet and konnakol, (somewhat – but not entirely – like bol in North Indian Hindustani music) is the art of performing percussion syllables vocally in South Indian Carnatic music. Konnakol is the spoken component of solkattu, which refers to a combination of konnakol syllables spoken while simultaneously counting the tala (or metre) with the hand. Mr Manjunath is a wizard of Carnatic rhythm and thus of konnakol and his performance carries Mr Prakash’s music into a rarefied realm, as do, indeed, Mr Prakash’s own vocals, which he sings almost entirely in his Tamil tongue. But to suggest that these – and other – songs throughout the recording are “Indian” music would be giving only half the picture.

This music while written in the sacred and secular Carnatic idiom is also woven in and out, Mr Prakash’s musical western influences – not simply in some songs, but it seems to be everywhere – in some places [such as in the soaring ululations of Shiva Ramamurthi’s Carnatic-styled playing of the violin on “Nadia” and elsewhere, on “Roots (Ramakali)” and “The Warrior”] more overt than elsewhere on this recording. Clearly, then this is not a recording of what might easily be passed off as Indian music in the sense that could be explained as Bollywood music or classical Hindustani and Carnatic music. “The Warrior” itself is one of the most magical examples where the music and cultures of both east and west collide in the grand manner, accommodating both rippling and tumbling, jazzy drum grooves and the strict konnakol vocalastics of BC Manjunath, for instance. Elsewhere a new surprise presents itself in the form of “Up in Flames” where the moody rap poetry of Mic Holden stabs at the senses while the lilt of Mr Prakash’s airy vocals adds an atmospheric droning element to a song that climaxes in both rap as well as Carnatic rhythms.

Such is the ingenuity of Aditya Prakash’s music that his musical explorations never cease to dazzle and beguile. His soaring vocals carry the melodic element of this recording. Meanwhile his harmonic conceptions are also quite refreshing in both this intellectual approach to mixing musical principals (of modes and rhythmic methods) and musical metaphors as well. Musical fusion such as what Mr Prakash presents on Diaspora Kid may not be new. After all icons such as the pioneering composer and choreographer Uday Shankar and (more recently) musicians such as choreographer Mrinalini Sarabhai and her daughter Mallika (the latter famously collaborated with Peter Brook, who directed with writer Jean-Claude Carrière’s adaptation of the Indian epic poem Mahabharata and of course, more recently , John McLaughlin whose phenomenal music with the group Shakti made for a resurgence of Indian music along with Pandit Ravi Shankar, his daughter Anoushka Shankar and, of course the inimitable Zakir Hussain.

Superbly arranged with pianist Julian Le and performed by a stellar cast of musicians, this music has been wonderfully captured on a recording to die for…