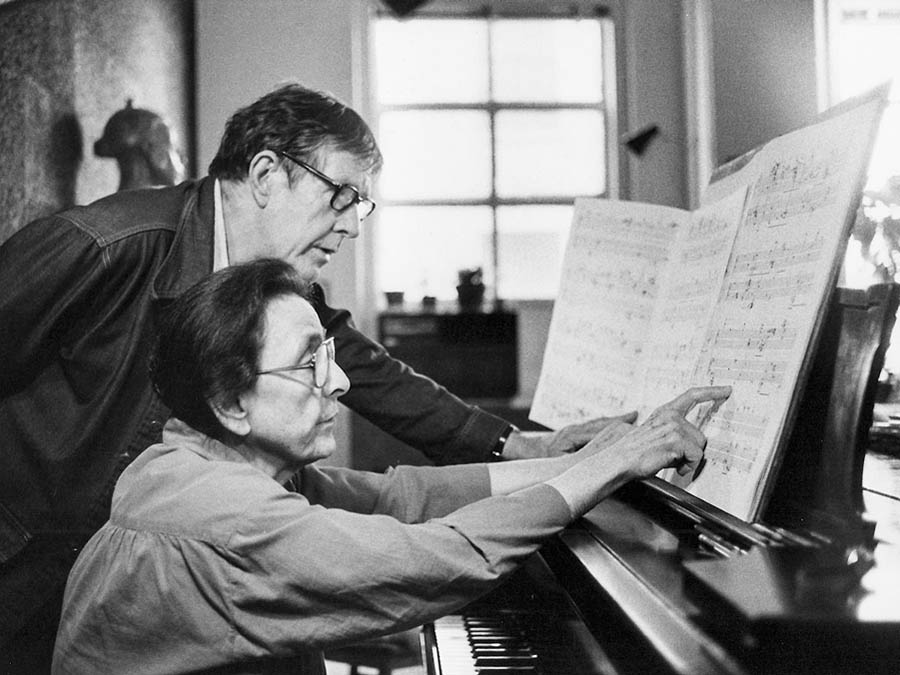 Guru to some, charlatan to others, John Cage constantly challenged the very idea of music, using randomness as a basis for composition, doctoring instruments to produce new sonorities, and including the widest array of sounds in his works. He wanted to break down the barriers between art and life, “not to bring order out of chaos… but simply to wake up the very life we’re living”. In his twenties Cage studied with Henry Cowell, who had already written pieces for piano in which the performer plucked and beat the strings directly. He also studied with Arnold Schoenberg, and their arguments about harmony (Cage thought it unimportant) led Schoenberg to say of him: “He’s not a composer; he’s an inventor – of genius.” Cage’s works in the 1930’s, mainly for percussion, are based around numerically ordered rhythmic patterns more akin to Eastern than Western music – another aspect of Cowell’s influence. In 1938 he started inserting screws, wood and paper onto the piano strings in order to produce percussive sounds. Much of his most expressive music was written for what came to be called ‘prepared piano.

In the 1940s Cage’s attitude to music underwent a profound change as a result of his study of Zen Buddhism. In an attempt to rid his music of all vestiges of self-expression and intentionality he started to introduce chance as a guiding principle first in the composition and then into performance. Music of Changes (1951) is the pivotal work; it was Cage’s last fully determinate piece, but was composed using chance processes. Here as elsewhere, most of the chance works were written out not in conventional notation but as visually startling and often ambiguous graphic designs. As these became increasingly irrational and anarchic, Cage developed a cult following during the 1960s, though many fellow musicians, such as Pierre Boulez, believed that his emphasis on randomness was a conceptual blind alley. This did not deter Cage but in the last twenty years of his life, Cage returned to more organisational methods of composing.

In the seventies Cage united his earlier innovations by producing pieces that continued to be radical and – some would say – intentionally offensive. However, there was no doubt that these were singularly Cage. They were neither unreachable nor impossible to comprehend; they were original in their concepts as well as in the manner in which they affected listeners. Approaching it has always been de rigeur that one must continue to listen to such works several times to feel their full impact. One such set is Etudes Australes divided into four books and a total of 32 etudes. Echoes of the Goldberg and the Diabelli? Perhaps, but also so radical in their construction that very few pianists dared to even attempt them. The Etude Australes are based on Atlas Australis, a book of maps of stars as they can be seen from Australia.

Using a complicated process involving the maps of that firmament and decisions made with the aid of favourite 65-choice Chinese chance manual, I-Ching, Cage marked the locations of certain stars on a transparent paper. These were transferred to music staves arranged in groups of four – an upper and lower clef for the pianist’s right and an upper and lower clef for the pianist’s left hand. The resulting notes reflect only the horizontal positions of the stars, and not all stars are used, because the maps used a variety of colors, and Cage’s chance operations limited the choices every time to specific colors. In the end Cage would have a string of notes and ask the I Ching which of them are to remain single tones and which are to become parts of aggregates. In the first etude this question is answered by a single number, in the second by two numbers, etc. So as the etudes progress, there are more and more aggregates: in the first, most sounds are single tones, in the final, thirty-second etude; roughly half of the sounds are aggregates. The aggregates themselves were selected from the list of available aggregates. This music was written specifically for Grete Sultan in 1974, an artist of considerable genius, when Cage heard that Sultan had been preparing to attempt his Book of Changes.

For Cage the resulting etudes represented certain political and social views. Collecting and using the aggregates for independent hands was particularly important, because according to Cage, it permitted the writing of a music which was not based on harmony, but it permitted harmonies to enter into such a nonharmonic music. How could you express that in political terms? It would permit that attitude expressed socially. It would permit institutions or organizations, groups of people, to join together in a world which was not nationally divided. Furthermore, the immense complexity of the music also had a social function. “I’m interested in the use of intelligence and the solution of impossible problems. And that’s what these Etudes [Australes] are all about, and the difficulty would ensure that “a performance would show that the impossible is not impossible.

Music notation is a map providing points of orientation that allows players to walk the walk, their idea of how a piece might journey through time correspondingly – hopefully – with the composer’s own. And in the case of John Cage, late-period pieces such as the Etudes Australes, a greater interpretative approach is demanded. Cage specifies notes and chords (without stems) and allies them to a time frame in which they can be placed; but the actual sounds to be used, and their ultimate duration, are left to the performer’s discretion – in this case to Grete Sultan. Fewer pianists show sounder judgement and greater acumen than the late German, who Cage had known since 1946. No one but her has executed the Etude Australes with such thoughtfulness and deft technique – the challenges to keep the right and left hand strata evolving concurrently – no easy task on the piano. So Sultan takes her time. From the margins of audibility, the first sound you hear are single notes gently fluttering in a harmonic mist of massages notes which fade into silence. This process becomes more complex as notes give way to chords as the etudes progress into the later books.

Taking her time allows Sultan to signpost the characteristic sonic traits of the notes and the (later) chords derived from the body of the instrument, individual chords are struck in a conventional way, fingers against the keyboard. Anarchic harmony was Cage’s way of describing randomised layering that resulted as his number pieces ran their unpredictable course; but Sultan’s sensitivity for shape-shifting sound around an emerging structure, her intuition for when sounds should be triggered while others decay, demonstrates the responsibility that comes from open-form freedom. The Etudes Australes maroon erratic, sporadic and volatile sound events inside sanctuaries of silence and once again Sultan has a conventionally played note, a punched cluster or a string from inside the piano made to sing via a sustaining device. Anarchy must never be mistaken for misanthropic chaos.

About Grete Sultan
The German-born American pianist, Grete Sultan (born Johanna Margarete Sultan), was born in Berlin into a musical family. By the time she started formal lessons of with her sister at the age of 5, she already could read music. Later, at 15 (1922), she entered the Berlin Hochschule für Musik, where she studied with Russian pianist studied with Leonid Kreutzer until her graduation in 1925. In 1927 she began her studies with Edwin Fischer, who was a major influence on her life and work. She also studied with Claudio Arrau. Another one of her teachers and an important influence on her musical life was Richard Buhlig, an American pianist living in Germany. Grete Sultan established herself as a pianist of both Classical and contemporary works in Berlin. In 1933, after the National Socialists came to power, she was, as all Jews were, banned from playing in public and could only appear in concerts of the “Juedischer Kulturbund” (Jewish Culture Association). With Richard Buhlig’s help, she fled Germany in 1941 via Lisbon, from where she emigrated to the USA by ship. She settled in New York City and took up piano teaching, first at Vassar College and the 92nd Street Y, then at the Masters’ School in Dobbs Ferry, NY. She toured widely, giving all-JS Bach, all-Ludwig van Beethoven, all-Franz Schubert, and all-contemporary programs; made her New York debut in 1947. Grete Sultan became associated with the composer Henry Cowell, with whom she gave performances of works by Arnold Schoenberg and Igor Stravinsky. In New York she met the composer John Cage, who became a lifelong friend and associate; they often appeared in concerts together.