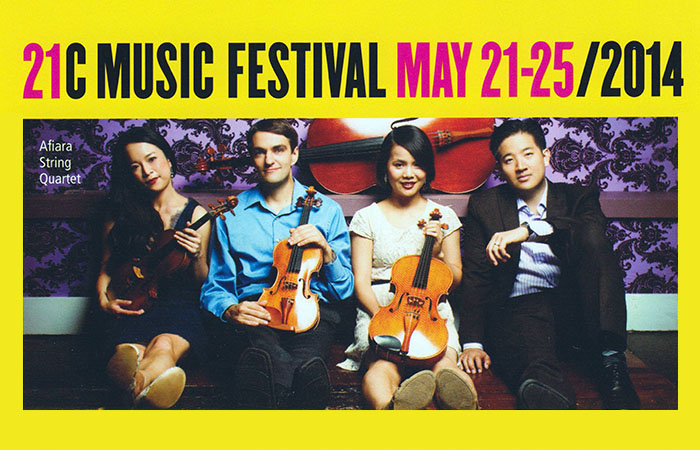 “Michael and Sonja Koerner have been champions of the creative process and commissioners of new works for much of their lives. It came as no surprise that Koerner Hall, named in their honour, was opened in 2009 with Beethoven, but also solo piano works by Györgi Ligeti and a new orchestral and choral work by their long-time friend, R. Murray Schafer. The Conservatory is extremely grateful for Michael and Sonja’s support and encouragement that enabled us to launch an annual festival of new works,” said Mervon Mehta, Executive Director of Performing Arts at The Royal Conservatory.

Michael Koerner remarked: “Charles Ives, the American composer-iconoclast wrote outrageously courageous music about 100 years ago and when asked what he was up to, he would say “I want to stretch your ears.” This 21C Music Festival is just about that: ear stretching.”

On Thursday, May 22, a concert titled FASTER STILL ANAÏS NIN will include a world premiere of String Quartet No. 3 (The Questioning) by Canadian composer Christos Hatzis, written for and played by the Afiara String Quartet, The Conservatory’s quartet-in-residence. The Toronto premiere of Canadian composer Brian Current’s Faster Still, a piece that is part of a series of works that feature constantly changing tempos, will be performed by the Nyx Quartet (ensemble formed by students of The Glenn Gould School), Véronique Mathieu on violin, and Claudia Chan on piano. Both Ms. Mathieu and Ms. Chan are Royal Conservatory alumnae. The Canadian premiere of Dutch composer Louis Andriessen’s Anaïs Nin, a semi-staged work for chamber ensemble, video, and soprano, based on the diary entries of Anaïs Nin, will be performed by Canadian mezzo-soprano Wallis Giunta and 21C Ensemble. The work is staged by Liza Balkan, with the help of videographer Valerie Buhagiar. This very special evening also serves as a celebration of the 80th birthday of R. Murray Schafer, who has been composer-in-residence at The Conservatory since 2010, with the performance of his Quintet for Piano and Strings, played by The Conservatory’s own ARC Ensemble.

chilly eve of lemon cane on Friday, May 23, features three world premieres – by Canadian, Spanish, and American composers – that stretch the boundaries of classical music. Grammy Award nominated jazz pianist Uri Caine will offer a piano quintet (commissioned by The Banff Centre) to be played by the Afiara String Quartet and himself, titled Jagged Edges, inspired by the dramatic landscape of The Banff Centre in the Canadian Rockies. 2013 Grammy Award winner (for his work with Daft Punk), pianist, producer of numerous artists including Feist and Drake, provocateur, and Royal Conservatory alumnus, Chilly Gonzales, debuts his Suite from “The Shadow” (commissioned by The Royal Conservatory), written for a chamber ensemble that includes the composer at the piano. Gonzales said: “For years I’ve entertained the idea of writing some dramatic music around this fairy tale for adults by Hans Christian Andersen. Somehow, I haven’t managed to compose the full Wagnerian blockbuster this deserves to be. But in the meantime, here is a suite for chamber ensemble depicting a man at odds with his own shadow. It contains my first self-conscious waltz, a few glaring “leitmotifs,” and some sentimentality that I just couldn’t resist adding.”

Flamenco guitarist and producer Javier Limón, who made his Koerner Hall debut during the 2012-13 concert season with Amanda Martinez, debuts his first string quartet, Requiem Flamenco (commissioned by The Royal Conservatory), performed by the Afiara String Quartet and Alberto Suarez on the cojón. Finally, Toronto-based pianist/composer Eve Egoyan teams up with visual artist David Rokeby for the Toronto premiere of their piece, Surface Tension, a collaborative work for disklavier piano (an acoustic piano with a computer interface) and interactive video.

In NIGHT BLOOMS on Saturday, May 24, Marc-André Hamelin, one of Canada’s most prodigious piano talents, is featured in works that look back to 20th century stalwarts and forward with a new piece by Pulitzer Prize-winning composer Jennifer Higdon. Hamelin plays The Perilous Night, a solo work for prepared piano by John Cage, and is joined by the Pacifica Quartet for Leo Orenstein’s Piano Quintet, a still thoroughly modern piece, written in 1927. Finally, Hamelin and the Pacifica Quartet are joined by a Canadian baritone Joshua Hopkins for the Canadian premiere of a work by Higdon, titled Dooryard Bloom (commissioned by The Royal Conservatory). Dooryard Bloom is based on Walt Whitman’s poem “When Lilacs Last in the Dooryard Bloom’d,” which he wrote in response to the assassination of Abraham Lincoln.

Marc-André Hamelin appears for the second time during the 21C Music Festival on Sunday, May 25, in a concert titled HUSH!, which features a rare performance of For Bunita Marcus, a 70-minute work for solo piano marked entirely triple piano by the late American composer Morton Feldman.

On two evenings, following mainstage Koerner Hall performances, Festival After Hours concerts will be held in Conservatory Theatre, featuring new works in a causal setting. A cash bar will be open. On May 23, two Toronto-based Indian artists, Trichy Sankaran (mrdangam) and Gurpreet Chana (tabla), will perform. Mr. Chana, known as “The Tabla Guy,” presents his ground-breaking integration of tabla and technology that will start in a classical mode and then turn the Conservatory Theatre into a club as he morphs into dance beats. Internationally revered percussion master Sankaran performs the world premiere of HAMSA, commissioned by The Conservatory. On May 24, the Pacifica Quartet will perform the world premiere of Shulamit Ran’s String Quartet No. 3 – GLITTER, DOOM, SHARDS, MEMORY for string quartet; flutists Susan Hoeppner and Leslie Newman play Andrew Staniland’s Flute vs Flute; and Sanya Eng (harp) and Ryan Scott (percussion) perform Michael Colgrass’s Pan Trio (steel player to be announced shortly).

The Royal Conservatory has partnered with New Music Concerts Ensemble (under the direction of Founding Artistic Director Robert Aitken) and Esprit Orchestra (conducted by Founding Music Director Alex Pauk) who will present two of their respective season’s concerts as part of the inaugural edition of the 21C Music Festival. On May 21, New Music Concerts presents New Beijing will feature pipa virtuoso Lan Weiwei, who coordinates a contemporary music program at the Beijing Conservatory. New Music Concerts has invited Weiwei’s colleagues Jia Guoping, Shi Fuhong, and Chen Xiaoyong to compose new works for her (commissioned by New Music Concerts with funding from The Royal Conservatory and Roger D. Moore), featuring pipa in combination with western instruments. Shi Fuhong’s piece is titled Mountains and Seas, and the concert will also include Chinese-Canadian composer and Conservatory alumna Alexina Louie’s Imaginary Opera. On May 25, Esprit Orchestra presents Mysteries will include premieres of new works by two important emerging Canadian composers living and working abroad: Zosha Di Castri (world premiere) and Christopher Mayo (world premiere of a work for soprano, two mezzo-sopranos, alto, and orchestra). The program will also feature the North American premiere of Mysteriën, a new piece by Louis Andriessen, as well as the Toronto premiere of Mark-Anthony Turnage’s Out of Black Dust.

All of the performances starting at 8:00pm will also include either a pre- or post-concert artist/composer chats, with the pre-concert events starting at 7:15pm. Additionally, Chilly Gonzales launches his Re-Introduction Etudes, a book of études for solo piano, with a discussion and selections performed by students from The Royal Conservatory, on Saturday, May 24, at 2:00pm in Mazzoleni Concert Hall, located in the historic Ihnatowycz Hall.

Sultans of String In Concert With Anwar Khurshid in Toronto