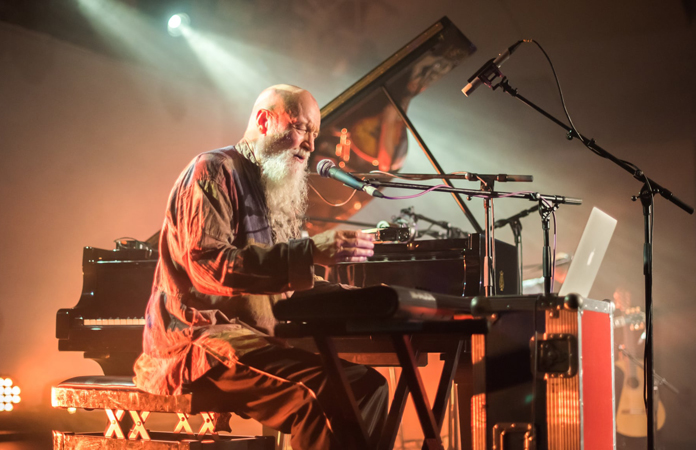 The nine hundred and fourth at Toronto’s Koerner Hall happened on the eve of one of the coldest (and snowiest) days in Canada. But it was all warmth and camaraderie with a large dose of breathless anticipation among those of us cognoscenti and just plain minimalist music lovers as the congregation grew and filled the city’s most august venue. And then it quietly turned 8:00 pm. An uncharacteristic “boo” from a cad, ignorant that he was in the sacred space of music, followed by a quiet but sharp rebuke threatened to derail Marvon Mehta’s always gracious welcoming words – this time rightly acknowledging the hallowed ground that which once (and still) belonged to the Mississaugas of the Credit, the Anishnabeg, the Chippewa, the Haudenosaunee and the Wendat peoples, on which stood our precious auditorium. Happily though, the audience was quick to move past the unpleasantness.

As suddenly as all of that was forgotten Tracy Silverman opened the evening with a solo performance on his fabled six-string electric violin accompanied by an array of pedals and other electronic devices. Mr Silverman’s feet fairly danced as he put them to work dexterously with bow and fingers that caressed and glided across the strings of his magnificent instrument – mostly con arco but also sometimes when the music called for it, pizzicato. Whatever technique he employed it was a dazzling display of violin virtuosity, set in the modern context not-so-secretly aided and abetted by electronic wizardry as Mr Silverman showed why he is the darling of the minimalist composers from John Adams to Terry Riley, who at 85 now, is the éminence grise of Minimalism, a movement in music that is now thriving, more than fifty years on.

Naturally Mr Silverman’s repertoire comprised selections composed (some especially for him) by Mr Riley. Bathed in the soft yellow spotlight Mr Silverman began to regale the stunned audience with “Sri Camel”, his incisiveness, urgency and lightness of touch combined with a breathtaking balance of poise and daring as he thrillingly captured the often solemn undulating rhythm of the character in Mr Riley’s composition. Looping in liquid streams of quavers that gathered into a gentle cascade that rose and fell in an the ebb and flow – a multiplicity of swirling currents that combined with several melodic tracts looped in – to mimic the camel’s characteristic gait.

Other works were gave further evidence of what has now come to be a significant watermark of a Terry Riley composition: the harmonics of the Indian Rudra veena with ceaseless drones which he typically employs to create rhythmic tanams of Indian classical music and to express harmony with often absent (in this case) clapped tala of the performed works. Mr Silverman delivered his coup de grace with excerpts from Mr Riley’s mighty composition The Palmian Chord Ryddle.

It was here that the six-string electric violin was put through its truly magically paces. Commissioned by the Nashville Symphony, The Palmian Chord Ryddle is a kind of eight-part musical autobiography (of Mr Riley) in which Mr Silverman’s pioneering work on his instrument sets the pace for the sparse, translucent “one-man string quartet”, its brilliantly orchestration captured in Mr Silverman’s arrangement. Here the violinist employed a diverse tonal arsenal. Rendered with silky legato the tricky double-stops amplifying the effect through texture and sometimes volume to convey a myriad of tone colours and emotions. Throughout Mr Silverman’s sound was lean, yet focussed, gleaming and notable for his eloquent use of protamento in which his notes were moulded into something ever so heartfelt and noble.

Damien Sneed and the Toronto Mass Choir: “We Shall Overcome” A Celebration of Dr. Martin Luther King