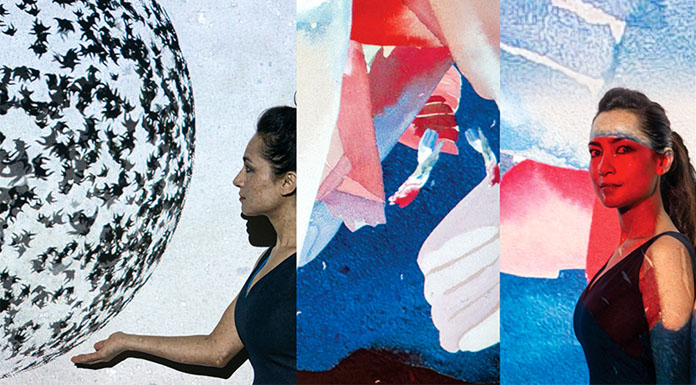 Toronto, September 19, 2017 — The Aga Khan Museum announces “Nomadic Architecture,” a dynamic evening of storytelling through multimedia art, music, and dance during Nuit Blanche Toronto. From sunset on September 30 to sunrise on October 1, visitors are invited to discover the artistry of internationally acclaimed New York-based artist Shahzia Sikander and more than two dozen musicians, some JUNO Award winners, performing in gathering spaces throughout the Museum, Aga Khan Park, and Ismaili Centre, Toronto (ICT). This marks the second year the Museum is a featured venue in the city’s annual all-night contemporary art event.

In addition to Sikander’s monumental installation Disruption as Rapture, highlights of the Aga Khan Museum’s Nuit Blanche 2017 schedule include:

“Our site-specific performance programming during Nuit Blanche flows from the Museum auditorium to the courtyard, then moves to the Park where it continues until dawn,” says Amirali Alibhai, Head of Performing Arts at the Aga Khan Museum. “And we’re thrilled that several of the night’s artists, including Chris Derksen and members of Nishtiman, will be giving full-length performances at the Museum on September 29. In fact, our incredible lineup for Nuit Blanche is a taste of the spectacular range of performing arts we have planned all season long at the Museum.”

The multimedia highlight of the Museum’s Nuit Blanche lineup is the Canadian premiere of Shahzia Sikander’s Disruption as Rapture, which will be projected all night long in the Aga Khan Park. In this immersive multimedia work, animated motifs from an 18th-century illustrated manuscript of the Gulshan-i ‘Ishq (Rose Garden of Love) come alive against an ever-shifting backdrop and a soundscape written by Pulitzer Prize-winning Chinese composer Du Yun. During a talk at the ICT on Nuit Blanche, Sikander shares insights into the installation. Disruption as Rapture was commissioned by the Philadelphia Museum of Art as a contemporary interpretation of the 18th-century manuscript, which is in their collection. The Aga Khan Museum owns a miniature of a scene from an earlier version of the Gulshan-i ‘Ishq, and that painting, entitled “Sea Serpent Swallows the Royal Fleet,” will be on display in the Museum’s first-floor Gallery. The Museum will be open until midnight during Nuit Blanche.

Outside the Museum, outdoor performances take place in the ephemeral and communal spaces of two Mongolian-style yurts. The diverse programming inside reflects the myriad ways cultures communicate through the performing arts. Similar nomadic structures have been used in Central Asian communities for thousands of years and Greek historian Herodotus described the traditional dwellings as far back as 440 BCE.

“The theme of Nuit Blanche 2017, marking Canada’s 150th anniversary, is looking forward and placing diversity at the heart of future artistic discourse,” says Henry Kim, Aga Khan Museum Director and CEO. “At the Museum, we focus on that every day, so we are thrilled to have a night during which we can all celebrate the many pathways and places of creative expression.”

The Aga Khan Museum in Toronto, Canada, has been established and developed by the Aga Khan Trust for Culture (AKTC), which is an agency of the Aga Khan Development Network (AKDN). The Museum’s mission is to foster a greater understanding and appreciation of the contribution that Muslim civilizations have made to world heritage while often reflecting, through both its permanent and temporary exhibitions, how cultures connect with one another. Designed by architect Fumihiko Maki, the Museum shares a 6.8-hectare site with Toronto’s Ismaili Centre, which was designed by architect Charles Correa. The surrounding landscaped park was designed by landscape architect Vladimir Djurovic.