Chuño, an innovative new album of Latin percussion and vocals, was released April 16, 2018, on CD Baby by the New York based Argentinian duo Franco Pinna and Sofía Tosello. It may be purchased at the most popular download and streaming sites worldwide.

Chuño is genuinely one-of-a-kind, unlike anything the listener is likely to have heard before. At its heart is an original instrument, the arpa legüera, that Pinna created four years ago in search of new sounds for his drum set. It is a percussion string instrument that uses the bombo ligüero, a traditional South American drum, as a resonating chamber, creating a sound reminiscent of both harp and drum, but with its own transcendent qualities. At the same time, he added a variety of world percussion instruments to his set. The new instrumentation led Pinna to explore a vast range of rhythmic and harmonic combinations, an authentically unique sound that was completed by the addition of a vocalist to provide the melodic line.

In Tosello, a noted singer of diverse South American, Caribbean, and jazz genres, he found the perfect collaborator. Argentinian artists based in New York, they already admired each other’s work. She jumped at the chance to create a distinct new sound with someone she regarded as a “master of rhythm.”

For the past two years, Pinna and Tosello have honed and innovated the sound of Chuño before enthusiastic crowds at New York venues including Club Bonafide, Terraza 7, Bar Lunatico, and Shapeshifter Lab.

With the release of Chuño a larger audience will experience their unique achievement, which combines folkloric and popular musicality with an experimentalism more often associated with jazz. The album’s eleven tracks include two originals by Pinna, seven arrangements of traditional and popular songs from South America and the Caribbean, and even a version of Sting’s “Fragile.” The vocals interweave with rhythms of astonishing complexity, yet the result is one of elegance and simplicity. Chuño speaks to a common humanity, as though tapping the most fundamental sounds of existence.

The distinguished flutist Yulia Musayelyan is a guest artist on one track. Otherwise, all vocals are by Tosello with instrumentation and arrangement by Pinna, who also produced.

Sofía Tosello sang her first professional concert at the age of 8 in her hometown of Córdoba in the heart of Argentina. Jazz and tango were heard in the household, and to the north of the city was the fount of Argentinian folklore, with its zambas and chacereras. When she moved to New York in 1999, she encountered even more forms, genres, and artists, both Latin American and international. In 2009 she brought out an album, Alma y Luna (Sunnyside Records), that pulled these traditions together, prompting Jazz Times to write: “the purity of her voice is matched by the vibrancy of her emotional palette and inventiveness of her cross-cultural technique.” In 2011 she formed Tangolandó with the guitarist Yuri Juárez, which combines tango with the Afro-Peruvian rhythms of Juárez’s native Perú. Tangolandó came out as an album in 2012. Her vocals have been heard on over a dozen albums and at hundreds of performances. Among the musicians she has performed and recordedwith are Pedro Giraudo, Octavio Brunetti, Horacio “El Negro” Hernández , Aquiles Báez, Guy Mendilow, Tatum Greenblatt, Emilio Solla, and Polly Ferman.

“Arpa Legüera” is a percussion/string  instrument that evokes the sounds of a Charango, African Kora, and Asian Koto. Arpa Legüera was invented and crafted by Franco Pinna in 2013. Its name arose from the 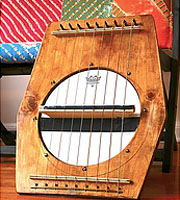 construction of the first prototype made of a piece of wood , guitar strings and a Bombo Legüero as a resonator.

Franco Pinna incorporated “Arpa Legüera” into his percussion setting in 2014. The following video shows an improvisation of the song “AFRO BLUE” on PERCUSSION SET WITH “ARPA LEGÜERA”