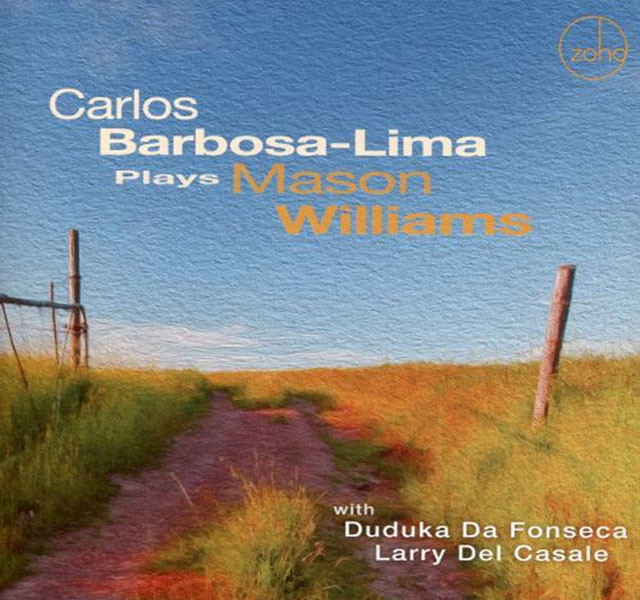 The brilliant Mason Williams is the recipient of a plethora of entertainment industry honors, including several Grammy Awards, multiple Emmys and Writers Guild Awards, honorary doctorates, gold records and a gubernatorial appointment as the Musician Laureate of the State of Oregon.

Mason was the head writer for the Smothers Brothers Comedy Hour, the New Smothers Brothers Comedy Hour, Saturday Night Live and has written numerous other variety shows and specials. Moreover, his musical compositions have been recorded by hundreds of the world’s greatest performing artists. Furthermore, he’s the author of bestselling books and the creator of many famous art installations that have appeared in museums all over the globe including Bus, an actual-sized photograph of a Greyhound bus in the permanent collections of both the Museum of Modern Art in New York City and the Museum of Contemporary Art in Los Angeles.

Years ago, after being chosen for a master class with Andres Segovia, Carlos Barbosa-Lima was selected to return to Madrid for private study with the Maestro who obviously perceived the exceptional talent the youthful Carlos possessed. Today, the world has Segovia’s prescience and artistic largesse to thank for the artist whom renowned conductor and composer Leo Brower calls “a genius.”

Classical Gas This, of course, is Mason Williams’ renowned masterpiece. It topped all three music industry charts: Billboard, Cash Box and Record World in 1968 and garnered Grammys for Best Instrumental Composition, Best Instrumental Performance and Best Instrumental Arrangement. The original recording has been broadcast over six million times. Its television show appearances alone are legion: from The Simpsons to The Sopranos. And “Gas” has been covered on such disparate instruments as ukulele, harp, handbells and bagpipes. Yet, Barbosa-Lima creates the most insightful and unique arrangement ever. Carlos changes the original key from A minor to G minor and reharmonizes it in two parts, the second being played deftly here by guitarist and producer Larry Del Casale.

Baroque-a-Nova Mason’s original version was nominated for a Grammy for Best Orchestral Performance in 1968. He said, “It’s a tune created from compositional scraps I had from ‘Classical Gas.’ and a combination of baroque music precision and the upbeat tempo and harmonic structure of Brazilian bossa nova.” Guitarist and producer Larry Del Casale joins Carlos for this synergistic arrangement as they complement Daisy Jopling’s violin lines.

Flamenco Lingo Mason says, “The Gypsy-like sections in the key of A minor wrap around the Mexican mariachi middle in the key of C. This song came in a dream. The setting was Spanish Gypsy or Mexican. There were adobe buildings and this music was playing. I woke about 6 a.m. and wrote it down.”

Country Idyll This pastoral melody was written for guitar and flute. But Carlos orchestrated it as a winsome solo. He sets the mood for this inviting piece with harmonics in the introduction. Mason commented, “Carlos showcases the melody dramatically.”

Saturday Night at the World Mason says, “This is like a French folk song. The different tempos were an attempt to render two aspects of the way time passes when you’re in love. The adagio waltz indicates how slowly time passes when you’re away from the one you love but the quicker tempo reflects the desire to dance and the dreamy, exhilarating side of romance when you’re with your lover.” Carlos arranged this lovely composition for guitar duet.

Sunflower This song manifested into one of Mason’s most famous art installations. He commissioned a skywriter to create petals and a stem around the sun over the desert in Apple Valley, California. The result was a two-mile wide, three-mile high “sunflower” with a life of forty seconds. Mason recalls composing this while exploring a chance compositional concept wherein words were used to create the intervals for melodies. Carlos’ interpretation with guitarist Larry Del Casale, percussionist Duduka Da Fonseca and clarinetist Rick Kriska creates a perfectly languid mood.

Fettuccini Western Carlos employing the right-hand Spanish guitar technique rasgueado establishes authority in the opening strains here. But it’s tempered by his seductive musical locution of the atmospheric melody and ultimately revisits the tune’s original perspective at the coda. Mason composed this, in part, while fly fishing. It was originally entitled “Common Ground,” which he recalls referred to the form of the piece being based on a repeating eight-measure harmonic pattern.

Guitar Carol This gorgeous piece originally appeared on Mason’s Christmas CD A Gift of Song. It was a Christmas tune only because Mason deemed it to be. Its beautiful melody captures the heart. Mason said, “I decided to write a new carol in an old style for the guitar.”

In Honor of … Again, Larry Del Casale joins Carlos on this arrangement. It’s a piece Mason wrote for his daughter Kathy’s wedding. Mason said, “It was a perfect marriage for me as a father and a composer. The tune seems ceremonial and could work as ‘in honor of’ other formal occasions as well.”

Katydid’s Ditty Carlos sets the mood using harmonics in the intro and again for the coda. The tune was written for Kate Kahn, a dancer on the Smothers Brothers Comedy Hour whom Mason met in 1968. He affectionately referred to Kate as “Katydid.” Kate later presented Mason with a music box that reproduced the lovely melody. This is a splendid example of Carlos thoughtfully creating an entrancing ambience by interpreting a simple song with imagination and feeling.

Riding the Low Moon The song’s title is from a line in Rudyard Kipling’s The Ballad of the East and West. A low moon appears large on the horizon just before dawn, and Mason composed this as “music for a nightly ride” so one can enjoy and experience the sight. Carlos’s virtuosity captures the scene magnificently.

Largo-de-Luxe The ensemble, featuring guitarist Larry Del Casale, percussionist Duduka da Fonseca and violinist Daisy Jopling, joins Carlos for this atmospheric tune that Mason composed originally for Jose Feliciano. It exudes a vitality and conveys the South American influences Mason was exploring. His goal was to combine the rhythms of the tango with bossa nova.

Shady Dell Again Carlos interprets a simple melody with captivating flair. He tuned the guitar’s two lowest strings to C and G respectively for added resonance and states the melody within using harmonics for a stunning effect, one that’s truly indicative of a master’s touch. Mason said, “I never imagined this as a solo piece. That Carlos was able to play this so beautifully is amazing.”

Shenandoah Over the years this song has become identified with Mason Williams because of his magnificent vocal rendition. “Shenandoah” was probably written for an Oneida chief named Skenadoah. The word Shenadoah means “daughter of the stars.” Carlos created a soulful rendition of this timeless melody once again disclosing his prodigious virtuosity. Jim Carlton

One couldn’t seriously be interested in the exponents of great classical guitarists & arrangers without encountering the amazing work of Carlos Barbosa-Lima. He is considered the best of the best in both categories.

For him to arrange and record a full album of my compositions is beyond my wildest dreams, but it’s a wildest dream come true!

The tunes you write are like children you’ve sent out into the world that come back to you. They reflect the myriad experiences they have had but are transformed by them. They are recognizable & yet have become something surprisingly unique on their own.
Carlos is considered by those in the know as a genius and an artistic advocate, if you will, of musical compositions and someone who creates magnificent guitar transcriptions and truly vivid arrangements.

Moreover, he has bestowed that genius on the artistry of Gershwin, Ellington, Scott Joplin, Dave Brubeck, Lennon & McCartney & others; so for me to be included among those extraordinary composers is an honor I would never have even imagined possible. His brilliance shines a light on my body of work that illuminates so many of my other compositions.