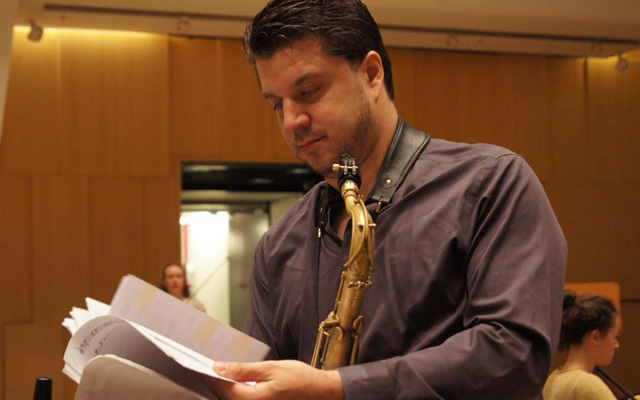 While top billing on this disc goes to Julio Botti, for his brightly lit and eloquent work on the tenor and soprano saxophones, the contribution of pianist Pablo Ziegler cannot be praised enough. Ziegler is a musician’s musician and his eminently articulate pianism, production and musical direction make this entire performance an intensely beautiful one. More importantly it is his ingenuity in adapting the role of the bandoneon to the saxophone on but two important recordings so far. Tango Nostalgias (Zoho Music, 2013) and this one. Inevitably Ziegler found a soulmate the legendary Astor Piazzolla, whose seminal Nuevo Tango compositions are the centrepiece of this disc. But Pablo Ziegler renews his association with the star of the show, Julio Botti whose luminous saxophone soars through Sax to Tango. 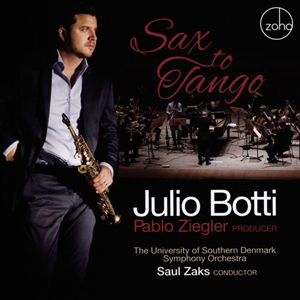 These twelve essays are charged with rapid melodic figure, pulsing polymetres and rollercoaster rhythms. Julio Botti interprets each one as if he were cutting a gleaming gem with a diamond-edged rapier. His playing is en pointe and brings to life everything that is so utterly unique and mesmerising about the tango: its raw sexuality and romantic, gliding elegance as he captures the intensity of creation of Piazzolla’s compositions (including a breathtaking new arrangement of the iconic ‘Libertango’), one by Hector Stamponi, another by Juan Carlos Cobain, and three other brilliant ones written by Pablo Ziegler, including his magnificent ‘La Rayuela’ which recalls – in music – Julio Cortázar’s great novel of the same name. The pianist’s ingenuity is one of the winningest aspects of this album. He plays the music with credible tempos, resilient phrasing and subtle dynamic gradations. Best of all, however, Ziegler – both in his arrangements and in his performance – captures the art of the tango in all its amorous glory.

Could either Julio Botti or Pablo Ziegler have brought this music to fruition without a bracing performance by a masterful orchestra? Absolutely not! The University of Southern Denmark Symphony Orchestra is a revelation on this disc. Their playing bristles with technical prowess and their expressive purpose arises from a seemingly innate understanding not only of a music score, but the unstated visceral elements of the Argentinean tango. Their conductor, another celebrated Argentinean, Saul Zaks, ensures that they stay sharp through the extremes of moods – lyrical, pastoral and passionate – holding nothing back from one end of the recording to the other. All told this is a compelling piece of musical literature that would have been possible had not all these elements come together in one glorious disc.