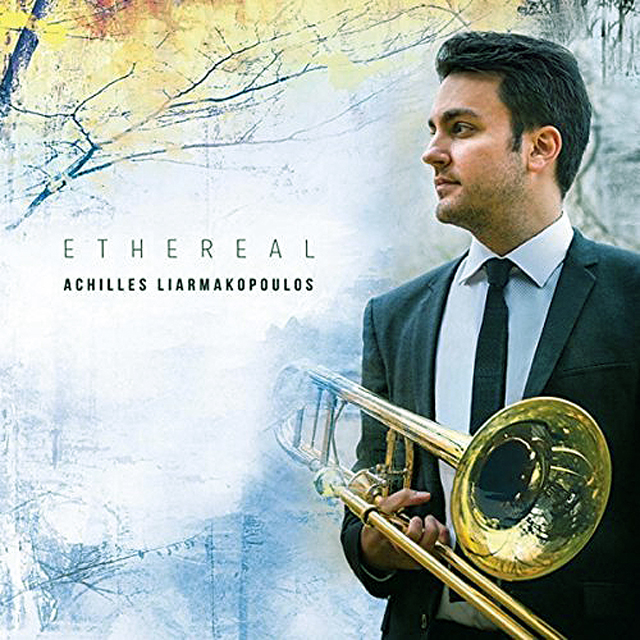 What a musician – any musician – makes of and does with the music he or she plays is not entirely up to the musician in question who is creating a reading of it. This act might be complicated of course, often because the composer of the piece communicates his or her vision of the piece, through the writing; all but insisting on how it should be played by adding strategically-placed markings throughout. And then, of course, there is the competency of the performing musician, which often enables reading between the lines to make the notes leap off the paper. There’s also his or her technical facility with the instrument. But surely the ability to make the instrument speak in amazing new ways while breathing new life into the works not written for, or organic to his or her instrument must rank very high in the evaluation of the performance of the works?

Such is the challenge presented to the brilliant young Achilles Liarmakopoulos on his album entitled Ethereal. How the trombonist deals with the prospect is nothing short of characteristic of a trombone-playing God of Olympus. The booklet notes written by Chuck Daellenbach, tubist and legendary founder of The Canadian Brass, suggest that Achilles Liarmakopoulos (incidentally a charter-member of The Canadian Brass) “has given the trombone an entirely new voice”. Focus for a moment on the word “voice”; in music that would mean the range of pitch or type of tone with which a person sings, such as soprano or tenor, etc. But no word or words can really give voice to what Achilles Liarmakopoulos does with the black dots that appear on paper before him through the repertoire on this disc; how notes simply named after a handful of consonants and/or vowels in ordinary speech and mimicking speech-sounds come alive in monumental ways.

It doesn’t stop there. Achilles Liarmakopoulos draws out the poetry from these works in novel ways, becoming an Aesop, a Saki and a Dylan Thomas all rolled into one, as he shapes the works’ idioms with the concrete, infuses the imagism of each with the rock of a sculpture as well as with the flesh of its model, creating with each a powerful vortex of tone-colour and gleaming texture; a sound that makes his trombone by turns paint and sculpt and sing like ascending seraphim. Appropriately enough the album is entitled Ethereal, after the ineffably beautiful song of the same name written by pianist Carolina Calvache, who also contributes “Trombonsillo” which is, to me at least, more beautiful than “Ethereal” (if such a thing were at all possible) by a million miles. The pianist plays on both pieces of course, and in any other scenario would have stolen the show away from the main protagonist as well.

Ethereal (the album) is like a jewel-encrusted crown; with a myriad sparkling gems from Egberto Gismonti’s great contemplative work, “Agua e Vinho” which features a star turn by the harpist Coline-Marie Orliac and “Paco Ordeón”, which is pregnant with metaphor and meaning as well. Gabriel Senanes is also represented by “Oscuro Silencio”; Enrique Granados by his iconic suite “Tonadillas al Estilo Antiguo”, Andrew Cadima by “Sleepwalker” and the magnificent Saint-Preux by “Concerto pour une Voix”. Spiros Exaras contributes the arrangement to Saint-Preux’s piece and also contributes “Nostos” appearing on it – and four other pieces – as he bathes his guitar in the bright light of his genius as well. All of this while Achilles Liarmakopoulos wears this crown upon his head, prince among musicians that he is…