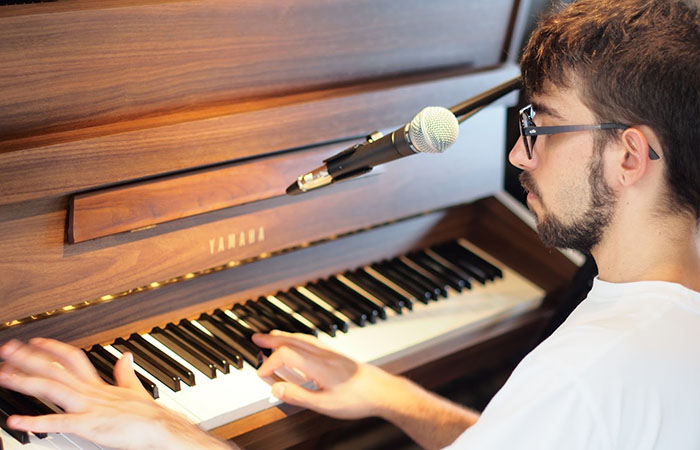 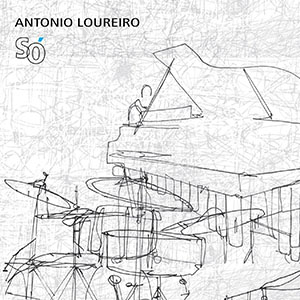 The Paulista, Antonio Loureiro, born and bred in Minas Gerais, is an eminently gifted multi-instrumentalist and is to be ranked with the new generations of Musica Brasileira musicians such as that other ingenious multi-instrumentalists, André Mehmari. But that is where all comparisons must end. Mr. Loureiro is a sublime rhythmist, the kind of musician that Miles Davis valued the most as Mr. Loureiro is a master of time—tempo and pulse. This is not something he has learned so much as something that he seems to have been born with. Mr. Loureiro proves this time and time again, not only when he is drumming, but also when he sits down at the piano or the vibraphone on Só. He has the remarkable ability to find the exact measures for both sound and silence. Consider when he strikes a note dallying over it by depressing the key and the pedal seemingly forever. Moreover, he has a myriad measures for notes. As a result he can glorify a dominant note; then augment it with a dazzling run or a leaping arpeggio. Even more remarkably he is a vocalist of rare qualities; a counter tenor who is capable of such controlled breathing that he makes vocal foray an aria; the centrepiece of some of his songs that go beyond mere “songs,” and which are elevated in to the realm of something symphonic. At times like these he seems to pick up from where Egberto Gismonti leaves off, making music that unfolds like concerti in this remarkable recording.

Mr. Loureiro does much of the compositions here, sharing credits on two songs with Thiago Amud and Makely Ka, respectively. His music echoes off the undulating topography of Minas Gerais and Bahia in the mighty state in Northeast Brasil. This melding with the urbane sounds of Sao Paulo is evident in the chart “Cabe Na Minha Ciranda,” which also recalls the ethereal and mystical sounds of the great Dorival Caymmi. The sounds of Milton Nascimento and Dorival Caymmi also gently rock the glorious music of “Luz da Terra”. But Antonio is not simply a rhythmist—although he’s a fine drummer—and he has the fine musical sense to compose melodically and often with complexity and in an elliptical and non-rectilinear manner. His compositional approach on “Pelas Águas” is wonderful in both its odd meter as well as in the manner in which the melody begins as if in reverse and then, awash in the sounds of the Brasilian violão, it begins to turn around before coming inside out again. Mr. Loureiro is spectacular again in “Cabe Na Minha Ciranda,” which is not only wonderfully elegiac, but also and meaningfully ironic, as he is in “Antidotodesejo”. Overall Mr. Loureiro’s music provides a sense that he is completely wrapped up in a music that combines the sounds that seem to reflect off the concrete of the city, but also rattle and hum with the ambient jabbering and hush of the rainforest of the Northeast.

This is only the second time that Antonio Loureiro has made an independent foray into music. The fact that he shows an inspired sense of how to mix story telling with the impressionistic use of tonal textures and instrumental timbre of strings as well as brass reeds and winds; as well there is a surprising and almost beautiful treatment of dissonance and counterpoint in “Lindeza”; and all this is wholly telling about where and how far he can take his musicality. There is also the fact that he seems to have tapped into the well-spring that is Brasil in a manner that speaks volumes of just how much he has imbibed both the tradition and contemporaneity of Brasilian music. This is always a good sign because it shows appreciation of heritage—something that Brasil has in plenty—and it shows in the colours and rhythms and this spectacularly reflected in his music. Antonio Loureiro, like André Mehmari slightly before him, is a musician and composer of whom much is expected now and in the future.

Antonio Loureiro on the web: facebook.com/antonioloureirooficial

Anoushka Shankar – Traces of You