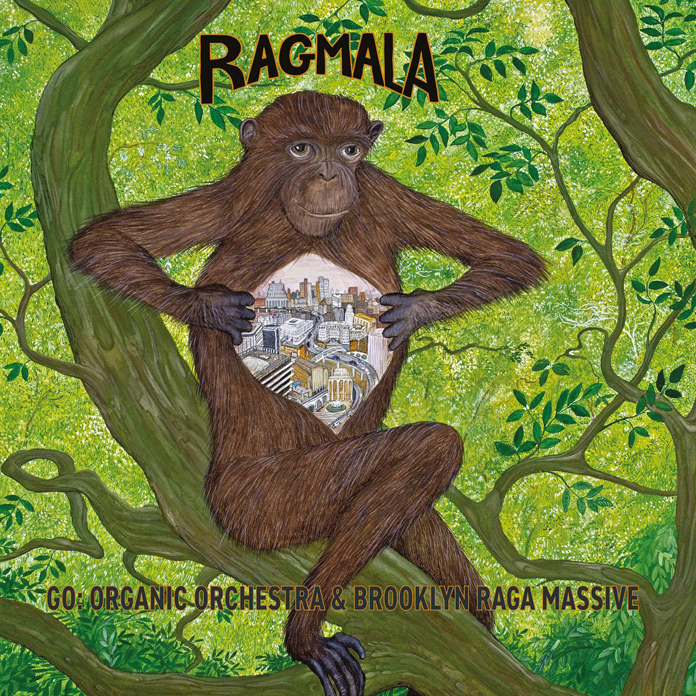 Listening to the drone of the tanpura that announces the first track on disc one of this package by the Go:Organic Orchestra with the Brooklyn Raga Massive, you would be forgiven for expecting the start of an alaap that is about to herald the first in a string of ragas on this double disc. This is, after all, Ragmala a necklace of ragas. Of course with the music of Adam Rudolph the only thing you can expect is the unexpected. In this instance the tanpura is joined by the lonesome clatter of the qurqaba, followed by the burble of the sintir as Moroccan musicians and Gnawa adepts, Abderahim and the great Hassan Hakmoun join in to introduce the rest of the Brooklyn Massive Raga. And this is only on disc one of the package. On disc two the tanpura gives way to Hamid Drake’s drumset which introduces the visceral guitar and bass duo of Marco Cappelli and Alex Marcelo. This is followed, of course, by two full ensembles: an incredible multi-cultural Brooklyn Raga Massive and Mr Rudolph’s own iconic large ensemble, the Go:Organic Orchestra. By the time each piece blooms in full, forty musicians unite as one soul dancing in the spirit of this wondrous music.

As the music progresses you become aware of why Mr Rudolph pointedly chose the Sanskrit shloka: “Shuthir mata, Laya pitaha” to headline the booklet notes. Translated this means “Melody is the Mother, Rhythm is the Father”. This is what drives the music of Ragmala. Now you know that these two discs are not a compendium of ragas. However, with every note of every melody sensuously entwined, in harmony with the violins, sitars and the horns and the Japanese flutes and the Indian and African flutes a dance of notes and phrases is brought to life spurred on by the African, Brasilian and Indian percussion. The shloka comes alive and with it the music conceived by Mr Rudolph and improvised by these magnificent musicians.

What Mr Rudolph is once again so skillful at recreating through music here is the fact that his experience of the touchstones a whole universe of cultural topographies enables to “speak” and “sing” in a multiplicity of melodic, harmonic and rhythmic dialects. But he is also able to produce something even greater and that is through his music he seems to be able to map out the cosmic interior. His music traces the spiral of thought that seems to spin inwards and come one step closer to knowing what in Yogic terms would be the Real Self. Focusing, it would seem, on a journey to The Centre of Being, he seems to channel the creative spirit through an expanded awareness and cosmic consciousness that appears to embrace the cosmic whole of music. It is an important journey for the artist-consciousness and is something that most prominently John Coltrane, Yusef Lateef and most recently Don Cherry sought.

Here, in the repertoire of Ragmala, through rhythmic repetition (through the hypnotic pulse and beat of the sintir and qurqaba as well as with the bàtá and the ground bass), a sense of melodic minimalism that is counterbalanced by ornate harmonic ornamentation, Mr Rudolph is able to musically rupture the planes of space and time and infuse his music with a sense of infinite, timeless Being. By the time the intensity has been built up during the works, he is able to mesmerise you and draw you into a perfect concentration that is achieved by Gnawas and Sufis that could, if you allow the music to lead you, if not forever, then at least for the duration of this music, into an awareness of the eternal Absolute.

After all, this is how he happened upon a curious thing; how through one-pointed concentration on the essence of the rhythm his consciousness experienced a kind of limitless expansion, which he – magically – is able to transpose to the notation – whether conventional or graphic and gestural – to awaken to a sense of the Cosmic Whole. If you listen to Mr Rudolph’s music on these two discs, you too can experience what he is trying to communicate about the process of musical creation and that it is a revelation, probably loosed by his heart center, that has helped melt away the division – at least in the meditating/listening consciousness – between the inner self and the outer space-time world. This is the utter and absolute beauty Mr Rudolph’s music; the experiencing of Ragmala.