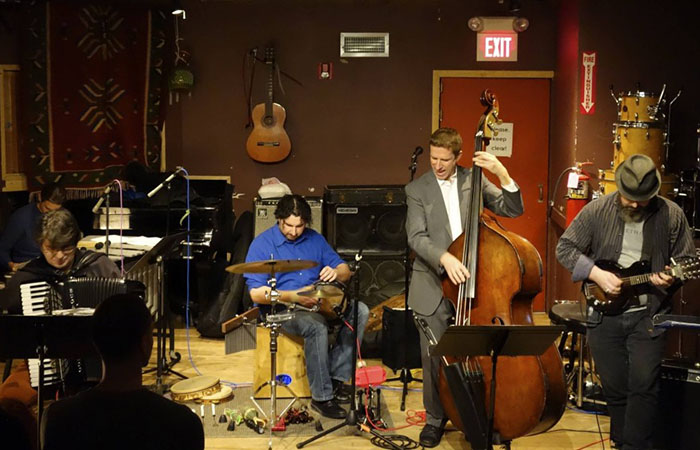 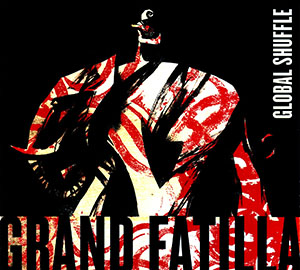 A Tribute to the Music of the World – Before this musical idea was presented formally on different stages, the basic band began as a trio: Mike Rivard (bassist), Matt Glover (electric mandolinist) and Roberto Cassan (accordionist) met up to look into folk music from all over the world. Some time later the trio became a quartet with the participation of the percussionist and singer Fabio Pirozzolo.

The name of this work is the same as its repertoire. Shuffle means to rearrange or to mix up; this album is a world mixture of expressions where the musicians show their love for the music of many regions including Argentina, Morocco and Italy, just to mention a few. In the music industry, it is a challenge but at the same time a terrific start to launch a work that pays homage to world music. When I say world music, I am not trying to downplay the richness of the particular music of each country or city, on the contrary, I want to highlight the color and variety of the music in each place and how it becomes universal based on its particular sonority.

Global Shuffle is a bunch/full of talent, feeling and virtuosity where Rivard, Glover, Cassan and Pirozzolo keep up the essential and mystically profound sound of ancient music and contribute to this legendary style with a renovated tone by improvising with open and universal jazz language.

Grand Fatilla´s work is the magic carpet which takes listeners to different known and unknown places. The leaders of this trip go from place to place in musical terms: From Italian Tarantellas to Moroccan trances, Argentine tangos to Bulgarian dances, or from Turkish sacred Sufi to Irish reels. This magic carpet flies through the sky and remains up in the air because of its spontaneity.

Each song has both subtle and crucial contributions from its musical performers. A great example is “Little Church”, an exciting and sentimental piece where the percussion lines are almost imperceptible and create a charming sensation, while the accordionist plays the melody, moving serenely through the notes of the song.

Maybe the most powerful and poignant interpretation is the song “Corrente” because it sounds like many rhythms at the same time, playing with the listener and taking him/her to remote places in only 3 minutes and thirty four seconds. The theme starts with a very catchy accordion intro, opening the way for the lines of the other instruments. “Corrente” connects the romantic French musette, the happy Venezuelan joropo, and the touching southern Italian and Brazilian tambourine-style of playing.

Dear music lover, I cannot finish this review without mentioning the tremendous performance by Fabio Pirozzolo in “Southern Italian Medley”. A solo vocal intro with an intense fragrance of gypsy, classical Italian folk and jazz. As Mr. Pirozollo plays, the speed and emotion increases creating a colossal display of talent.