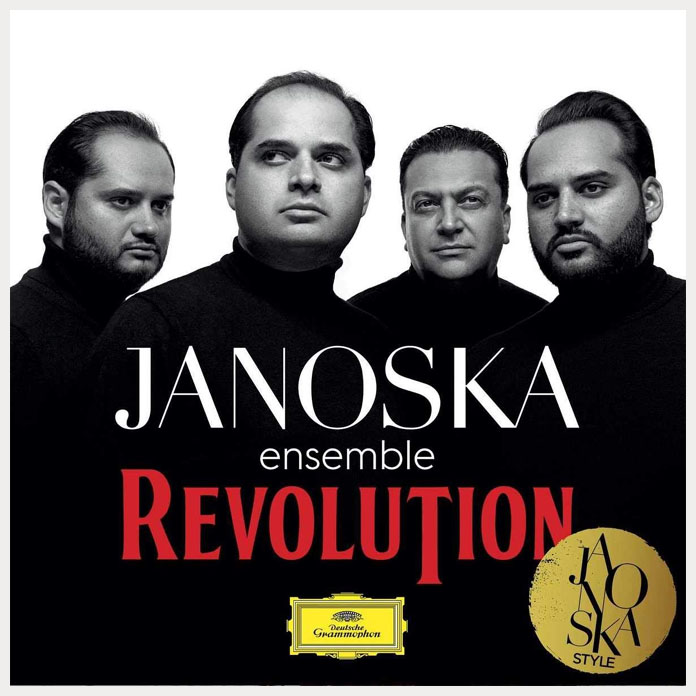 Rarely does the term, “beyond category” seem to fit a musician – or, in this instance – a group of chamber musicians so completely as it does the Janoska Ensemble.  Formed in 2013 by three brothers from Bratislava, Slovakia: Ondrej (violin), Roman (violin), and František (piano) Janoska, and their Hungarian double-bassist brother-in-law, Julius Darvas the ensemble pooled their frighteningly brilliant virtuosity on violin, piano and contrabass to develop what has now come to be referred to as The Janoska Style. The reason why both terms are so appropriate and exclusive especially when it comes to this ensemble is because there is simply nothing like what they play, which suggests the classical style, but just when you thought you could put your finger on it, the musical mirage begins to suggest that it is rooted in the Viennese café music of the fin-de-siècle, mixing melodies from the classical repertory with gypsy and other Eastern European vernacular influences; perhaps even rooted in Jazz improvisation.

This is, perhaps, why Revolution may be a title most apt, while even stating the obvious as nothing that the group plays is ever obvious and more like the sound of surprise. Anyone who has heard the Austrian contrabassist, Georg Breinschmid’s recordings Brein’s World (Preiser Records, 2010), Fire (Preiser Records, 2012) and Double Brein (Preiser Records, 2014), might have got a taste of their unique genius. And then there are several albums by the ensemble… Of course, listening to the ensemble itself such as on Revolution is quite another experience, one that is certainly not likely to be forgotten in a very long time. To begin with, the violinist-brothers play with the legendary, diabolical kind of “Paganini” virtuosity and the piano playing brother complements this with a flamboyant, yet highly emotive musicianship that evokes something what might have been if Liszt and Chopin were reborn in one person, which is to say that his extreme, lyrical virtuosity carries with what Heine might have called “the poetry of feeling”.

Revolution is an homage to the mastery of the Beatles and presents benchmark versions of three of their songs that are interspersed with the music of Mozart, Kreisler, Bach, Tchaikovsky and Wieniawski, with two originals by Janoskas strategically placed to suggest the heart of their music; which evokes the brother’s Romani ancestry. (It bears mention that contrabassist, Darvas is also family (being, as he is, a cousin not only by marriage, but also by virtue of sharing the same musical and cultural topography. Playing together, their musicianship becomes elevated to a wholly different and rarefied realm. Obsessive perfectionists, the Janoskas and Darvas have polished these works to gleaming gems. As composers, too, they also seem to write for their instruments idiomatically. Meanwhile always – no playing is ever flashy showing off virtuosity for virtuosity’s sake, but rather everything is focused on the heart and soul of the music at hand.

Together the Janoska Ensemble parley with the familiarity of a mystical brotherhood, yet their playing always retains that sense of gracious etiquette associated with the noble academies, the intimate or – in the case of the Beatles repertoire – for larger ecstatic audiences, and for stage, or film audiences. Yet nothing is forced or exaggerated or overly mannered; tempos, ensemble and balance – all seem effortlessly and intuitively right. The string sound is lucid, while the piano and bass add warmth to the continuo. These are, in sum, sincere and poised accounts; fitting tributes not only to the characters of their composers, but to the romance of music itself. Clearly an album to absolutely die for.

To Paradise for Onions: Songs and Chamber Works of Edith Hemenway