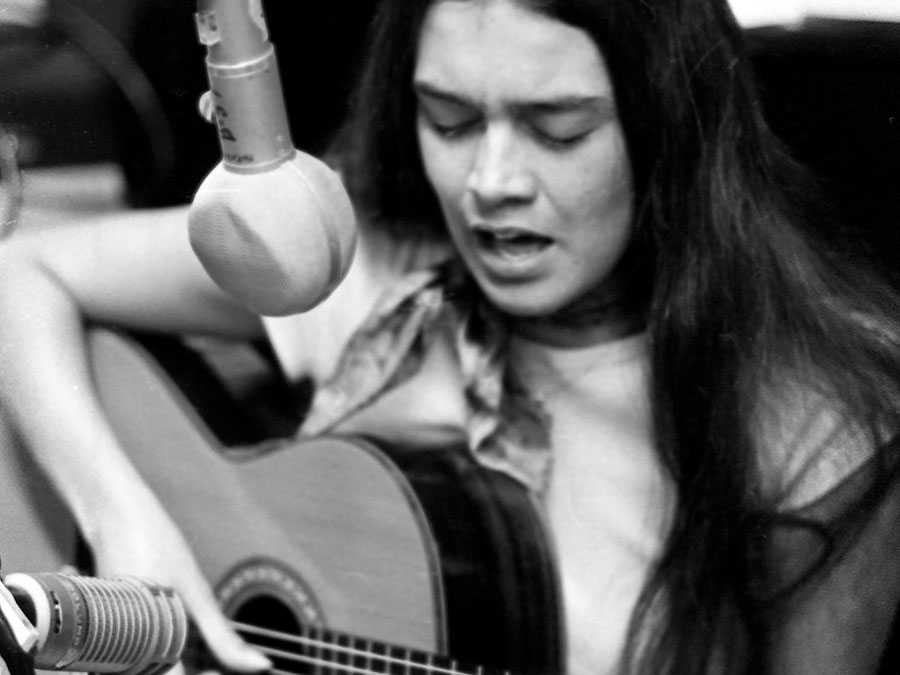 There has been a plethora of re-issued recordings in the past few years, but none quite like this on – Natureza by Joyce Moreno with Mauricio Maestro. The reasons are manifold: firstly this isn’t a re-issue [like many], but a true rarity that has been unearthed and its music brought into the light, thanks to yeoman work by musical sleuths like – in this instance – Joe Davis [of Far-Out Recordings], or like the magical recordings for other artists for whom Zev Feldman for done likewise.

Secondly – and this is significant – Natureza by Joyce Moreno and Mauricio Maestro – with orchestral work by the legendary Claus Ogerman is one of those recordings which like the pure gold was mined long ago [1977, to be precise], then hidden away and almost lost, but fortuitously rediscovered by Mr Davis before that proverbial gold has turned to dross. So the repertoire – this entire repertoire – equates to what is, in fact, a full album of premiere recording; songs that might never have seen the light of day.

Listening to this music over and over again, one can only find oneself catching one’s breath knowing what majestic music was all but “lost”. Josh Tautz’s excellent notes narrate the sad, near-demise of the music. With hindsight it is unthinkable that Mr Ogerman tried and then with the passage of time – and a series of unfortunate setbacks – all-but gave up on the idea of releasing this album. However, good frtune prevailed…

Sadly the tapes were also not stored properly [Brasilian summers can turn brutally hot and humid] and so it’s clear that some of the high quality has now been lost. For instance, on the magical and propulsive songs “Feminina” and “Moreno” the stately growl of the contrabass, as characteristically played by Buster Williams is almost non-existent.

Miraculously, though, this is not the case with the vocals of Joyce [or, for that matter, the sound of music by the other musicians]. However, by the time we get to “Moreno” the eloquent snarling pizzicato of Mr Williams magically reappears. By the time we get to “Decompassadamente” Mr William’s characteristic volcanic bubbling is in full flow. And yet the overall sound [magically preserved] contains some of the finest work by the North American musicians that Mr Ogerman used for this set.

The tenor saxophone played by Michael Brecker soars – and gleams gloriously as it does on “Coração Sonhador” with his tumbling, rippling cascades, and Coração Sonhador” features Mr Brecker playing though mighty and skittering harmonic inventions in an all-too-brief solo. Listening to transcendent, luminous melodic creations that drift and glide out of the flute of Joe Farrell and swathe the breathy harmonics and rhythmic pulses by the rest of the ensemble is a Keatsian “thing of beauty…” and therefore “…joy forever” – especially on “Feminina”, but everywhere else too really…

One had almost forgotten what a spectacular guitarist Joyce Moreno is and her performance throughout – with intricate pizzicato picking that is crowned with a glorious rhythmic attack – as she floats the lyric into the rarefied realm of music with her lustrous soprano.

The record also features near- intergalactic constellations of superheavyweights: Mike Manieri with the sonorous tintinnabulations of his vibraphone soli. Warren Bernhardt on keyboards [check him out on “Feminina”] is just one of them. Mauricio Maestro himself is an accomplished guitarist and that is quite evident here. And then, of course, the great Naná Vasconcelos provides percussion colours as only he could – flashes of lightening with his gongs and cymbals, the rolling rustle of his necklaces of gourds and shells.

The drumming of João Palma and Tutty Moreno a celebrated musician in his own right [and the star of the recording’s husband] who also plays other percussion instruments] provides the thunder of rhythmic momentum. And Ion Muniz playing flute on “Pega Leve”” is no slouch on the instrument by any stretch of the imagination.

Clearly we have been ever so fortunate that Far-Out Recordings have rescued this classic recording from near-extinction. With all its glitches and flaws that have resulted from age and poor storage, it is still worth its weight in gold. And that’s more than you can say for the scores of re-issues of artists with a far greater status in the musical stratosphere than this illustrious Brasilian chanteuse – Joyce Moreno, who also shares the spotlight with another prodigious Brasilian musician, Mauricio Maestro.