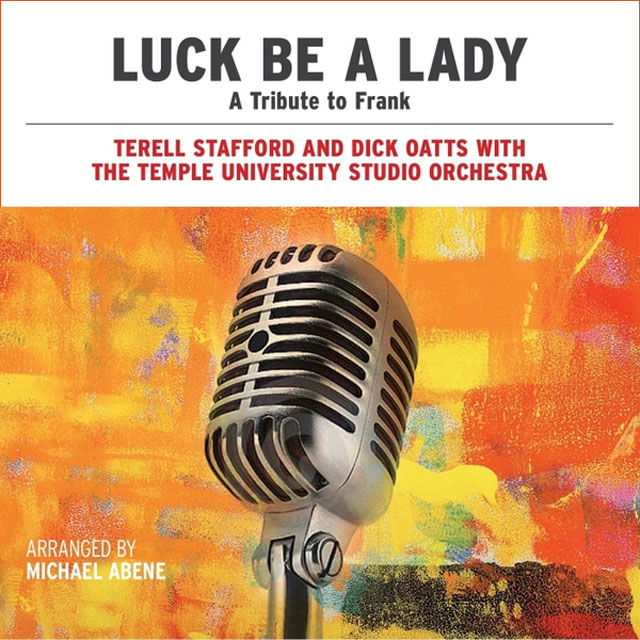 However you may choose to regard this disc – as an extended extended-play or as a very short CD – the effect of listening to Luck Be A Lady – Tribute to Frank Sinatra and to Terell Stafford, Dick Oatts and the Temple University Studio Orchestra will be the same: it’s a kind of nine-song medley where one song seems to fade into the other. Such are the insinuating silences on the record that they seem to be part of the music itself. There is a very good reason for this and it’s all in the voice of The Chairman of the Board, as Frank Sinatra was once referred to by Bono. When he sang, it was barely above a whisper. However, he was such a master of the expression, and phrasing that only Satchmo did better (in fact, he learned much from Louis Armstrong, in this regard), that it took all of the ingenuity of the engineers who prepared his microphone to deliver his voice to perfection – both in the studio and on stage. For this we have the first-hand observations of Stan Cornyn, who was in the studio when Mr Sinatra recorded an iconic album Francis Albert Sinatra & Antonio Carlos Jobim – arranged and conducted by Claus Ogerman, released on Mr Sinatra’s own label, Reprise, in 1967.

Could that record be a model for Luck Be A Lady with Terell Stafford on trumpet and Dick Oatts on alto saxophone? I would hazard a guess so. And even if it isn’t, certainly Michael Abene, who arranged, Andreas Delfs who conducted and the performers of The Temple University Studio Orchestra have an innate – an almost uncanny – understanding of Frank Sinatra, Claus Ogerman and that record as well as of Nelson Riddle (in that order). The result is that of all of the (instrumental) music that pays homage to Mr Sinatra’s oeuvre, none does so with as much sophistication, grace and cold fire as this one. Michael Abene is, of course, one of the greatest arrangers of music for large ensembles and like Claus Ogerman he has one of the finest, most Impressionist sensibilities in the true sense of (Mr Sinatra’s or any other) music unraveling as do the best works in the Impressionist tradition of Claude Debussy and Maurice Ravel – or in contemporary terms, Gil Evans. On this recording evidence of that skill reaches its zenith on “In the Wee Small Hours of the Morning”.

One can also hardly listen to this recording without finding oneself in an absolute state of wonder at the marvelous plays of the two principal soloists: Dick Oatts on alto saxophone and Terell Stafford on trumpet. Both men play with sublime restraint and sophistication, phrasing with such beauty and expression so subtle you might easily speculate that their lives depended on it. In fact, it’s as if the music were the soundtrack for a séance that indeed raised the happy spirit of Frank Sinatra, ‘Ole Blue Eyes’ himself.