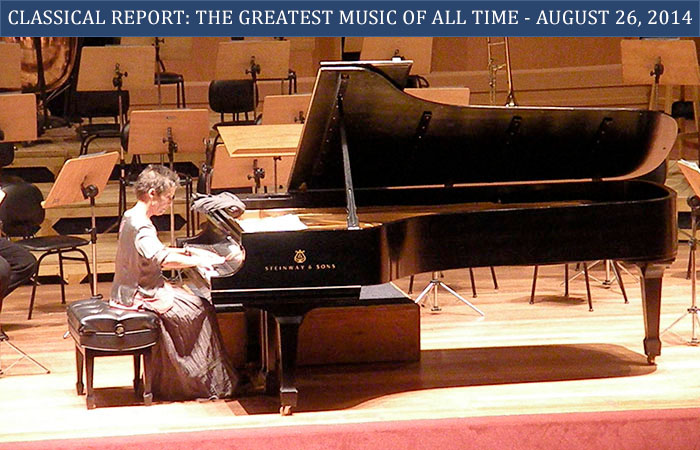 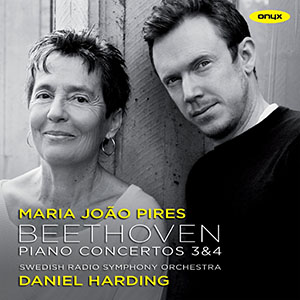 This album of concerti 3 and 4 is a profound recording. It creates a palimpsest of Beethoven’s creative mindset during the last years when he had his sense of hearing and could perform his work. His earliest concerti were distinctly eighteenth works, but already sound more “advanced” than Mozart’s. Concerto No. 1 was the most infectiously lively of his works. Concerto No. 2 follows a similar pattern: brilliant outer movements containing some startling changes of key and spectacular passage work, but with considerably lighter textures (there are no clarinets, trumpets or drums). Both concerti have at their centre wonderfully serene slow movements in which the emotion is both expansive and intensely concentrated. But Concerti 3 and 4 are distinctively different. They contain beautiful soaring motifs and brilliant melisma that may, at first seem to be in the shadow of Mozart’s later concerti, but at the end of each become distinctively Beethoven.

In Beethoven’s Piano Concerto No. 3 in C minor, his romantic anguish is more pronounced than in his earlier work, particularly in the outer movements, which combine symphonic grandeur with elegant pathos. The Largo begins with a sombre and intensely ruminative piano solo by the ineffable Maria João Pires. This is answered by more serene orchestral passages—as if to offer comfort and relief. Piano Concerto No. 4 in G major, the last of Beethoven’s concerti to be performed by him was completed in 1807. It begins unusually with the piano alone, again beautifully struck by Ms. Pires. She states the gently rocking theme, which the orchestra then takes up, leaving the piano silent. A sense of mystery has been established and when the soloist reappears it is with an almost improvisatory flourish. It is a long and expansive movement essentially sunny in mood, but with a definitive undertow of melancholy, in which the soloist ranges from rapturous to introspective. The short Andante takes the form of a dialogue between fierce, pithy statements from the orchestra and reticent responses from the piano for Ms. Pires, which suddenly blossom into a cadenza-like passage of great poignancy. The Rondo finale is extremely dramatic: a predominantly feverish abandon is interrupted by a wistful second subject, which is exquisitely echoed by the woodwind.

It is not simply the concerti, but also a performance like this that also defines the musician—in this case Maria João Pires. Her performance, in this instance may be described as great for it is a great musician who will mine the subtext of Beethoven’s (or any other composer’s) music for its secrets; get into the skin of the composer; inhabit his heart and soul; ask why? And when answers and secrets become known to her from the deepest wellspring of the composer’s heart—the musician—in this case the pianist Maria João Pires in turn in a performance so great it will be immortal. And that is exactly what happens in the case of Beethoven’s Concerti 3 and 4. It must also be said that the Swedish Radio Symphony Orchestra under the stewardship of Daniel Harding respond exquisitely to his commands and to the demands of their star soloist Maria João Pires.

Mario João Pires first appeared in public as a child of four and at seven was playing Mozart piano concertos in public. From the age of nine she studied piano at the Lisbon Conservatory with Campos Coelho and composition and theory with Francine Benoit, then continued her studies in Germany with Rosl Schid at the Musikhochschule in Munich and with Karl Engel in Hanover. After touring during her early youth in Portugal, Spain and Germany, at the age of twenty-six Pires won the Beethoven Bicentennial Competition in Brussels. This launched her career, with tours in Europe, Africa and Japan, although since then Pires has taken several periods of time away from the concert circuit. Read more…

Vocalastics – Voice as the First Instrument