Musicians with a passion for Brasilian music soon rather than later discover Hermeto Pascoal and fall under the spell of “Bruxo”, the “Sorcerer”. But it is one thing to be besotted by Hermeto Pascoal and quite another thing to be able to let the world know how you feel by interpreting Hermeto Pascoal’s music because it is, well, impossible to imitate and very hard to interpret. Hermeto Pascoal is to Brasil what Thelonious Monk is to the rest of the world. The music of the Brasilian is foxy, angular, wickedly humorous, heartbreakingly beautiful and impossible to resist. So when you come across any music that this American group Mente Clara produce on disc, make every effort to swoop it up. 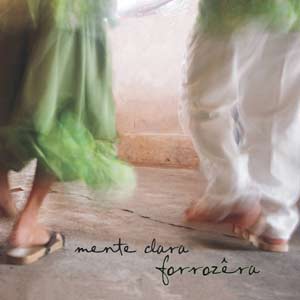 There are two reasons for this: First – the group interprets Hermeto Pascoal’s music like no one else I know, bar none; and second – They are a superb group of musicians. Period. So are they recklessly arrogant in attempting to make a record like Forrozêra, or just sublimely confident. To judge by the exemplary musicianship and prowess in all departments of this: instrumental prowess, musical intuition and invention (primary Hermeto Pascoal traits, by the way), and every other aspect of music-making, this group sounds sublime and confident and in the prime of an unusually creative period of their careers.

One hears in all of this repertoire – whether it is written by Hermeto Pascoal or by Mente Clara – the jaunty and slyly asymmetrical creativity, with its fascinating melodic twists and turns of phrase and harmonic ingenuity that is found in the unlikeliest of chord progressions, much like the great Brasilian Bruxo does. Try “Message from Hermeto” for size. What fascinates here is the music’s unpredictable movement, in increasingly decorous thematic trajectory, and the myriad modulations at the outset of the minor key relationship between Laura Otero’s voice and the rest of the instruments rather like Hermeto Pascoal does with his wife Aline Morena’s voice and his music as well. Here, as elsewhere the group’s wonderful sense of registral balance and articulation intensifies and colours the music.

In flanking this song with others on either side of it with music that is no less riveting, notably in the dramatic openings that are followed through wickedly brilliant middles movements and soaring endings this group achieves something few bands of its kind achieve. And this is only the group’s second CD. I glory in the thought of what is yet to come. Their judiciously reverberant sound and over the top arrangements illuminate Mente Clara’s carefully considered contrasts, bringing welcome vibrancy and presence to the performances. No notes are necessary here. The music of this disc provides an attractive entry-point to one of the most inventive bands that I have heard in a long time.

Mente Clara was born in Texas out of a love for the music of Hermeto Pascoal and other Brazilian masters. They combine soaring melody, sophisticated jazz harmony, and the danceable rhythms of Northeastern Brazil into a sound that is all their own. Straddling the line between jazz, world music, and fusion, the band has toured from coast to coast, developing a reputation for exciting live shows along the way. Their second album, Forrozêra, was released on June 2, 2015, and has been praised for its “dynamic rhythmic attack.” (Dave Sumner, Bird Is The Worm). Read more…