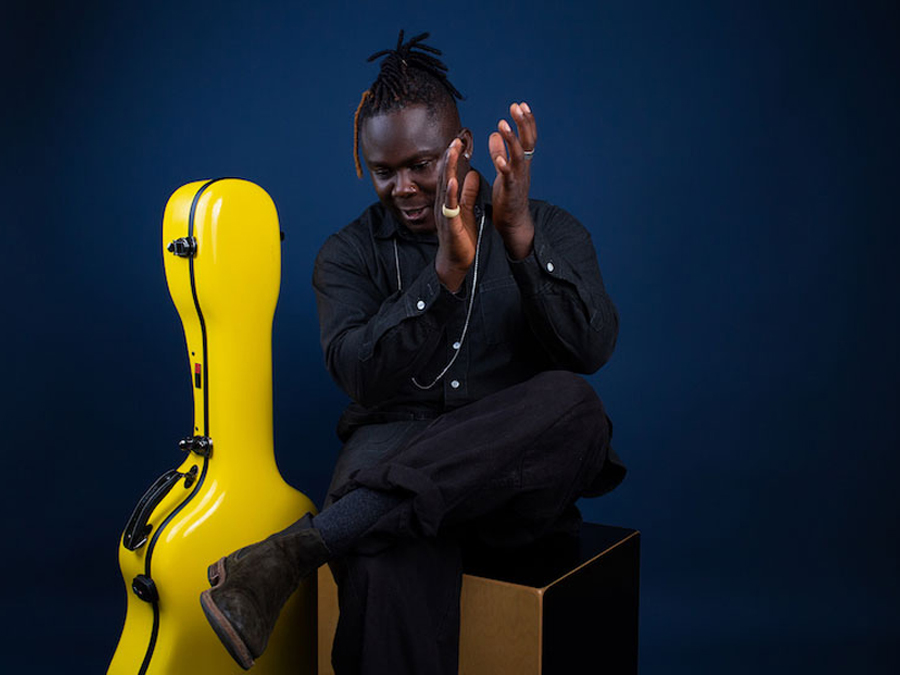 This is a spectacularly original album Jaku Mumor – an ethnomusicologist’s delight – is a mystical album of music with repertoire that comes from the deepest part of ancient Ghanaian wisdom. This wisdom is inspired by the Ghanaian’s relationship with the land – but principally with the sea that surrenders its riches to the people who show their respect and love to this gift from God.

Remarkably also, [although some might say “not-sosurprisingly so”] the erudition springs from the heart of Okaidja Afroso. The musician has been brought up on the tradition, learning early not only about the seas’s riches, but also the lofty traditions of his people. Consequently his music seems to be inhabited by a spirit that soars higher and higher as the songs bubble over with effervescence.

From the rippling groove of “Gidi Gidi” onwards, right through gorgeous ballads such as “Luna” and the pleasures savoured in the sensuality and suggestive propositions of “Kwarley”, to the album’s evocative finale which is a delightful meditation on the life of the fisherman and his beloved the sea that sustains Mr Afroso’s clear-eyed vision and artistry.

If you are not a Ghanaian, a salt-of-the-earth fisherman from the shores of the village nestling by the Atlantic Coast, you will [sadly] be unable to understand the lyrics that are sung with ineffably beautiful, sun-splashed intonation. But the rippling cascades and the soft, frothy surf of the artist’s environment is conjured by the percussion-colourists who create a magical, mystical atmosphere. All of this first comes alive in the melodious and songful artistry of Mr Afroso and his ubiquitous guitar.

Mr Afroso’s long-limbed, rangy and twangy tones are often bolstered by the lonesome and softly dancing lines that often enter into contrapuntal conversations with both the guitarist and the percussionists. Elipklim Amewode Kofi is a master of smoky brass utterances. His vocal style is a perfect fit for the music in general and the guitarist and vocalist in particular.

Every narrative and love song – or otherwise questing piece of music is magically transformed by the call-and-response of that comes – sometimes as gentle banter and [at other times] to embellish the narratives to the point of making them endearing fables. All of this appears to into soar into the rarefied realm in a magical alignment with the sky above the sea when the cast of Kokrobitey Fishermen and Fishmongers join in the work-songs along with the folksy Agash Sowah and Group and Jordan Sowah. Happily guides to the stories are provided in place of the Ghanaian lyrics.

You are unlikely to experience an album as magical as this – certainly not for a long time to come. Run – don’t walk – to get yourself a copy before the album Jaku Mumor sells out…