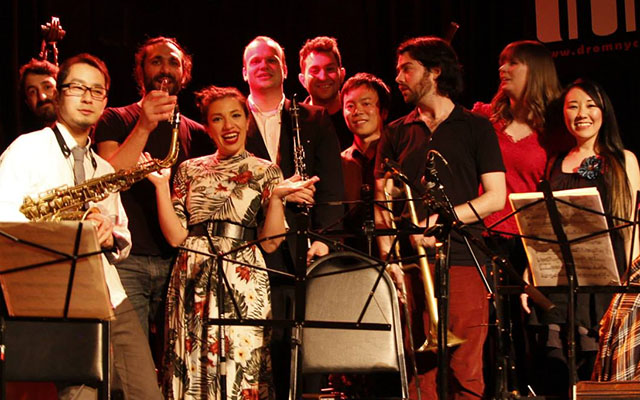 There is something of Federico Fellini in Petros Sakelliou. His music, and this has possibly everything to do with the title of this album but more so by virtue of its content, that it is beautifully reminiscent of Fellini’s film, La strada–even Amarcord. In his hands, the quirky, caustic, cameo-like and seemingly spontaneous qualities of Mr. Sakelliou’s Visual Music Circus become monumental and at the same time accessible, engaging and almost whimsical as it conjures clowns and the menagerie of other performers through the dissonant music from what appear to be instruments that are at delightful loggerheads with each other. Instead of sounding whimsical, the music sounds vivid and quite a few surprises. But there is a lot more going on here and the title Visual Music Circus is matched by the curlicue fonts of the title and the big-top graphics in blue (what? Not red?!) match the vivacious nature of the music. It all works so wonderfully well that I was transfixed as if I were at a recital the like of which I had never been to before. 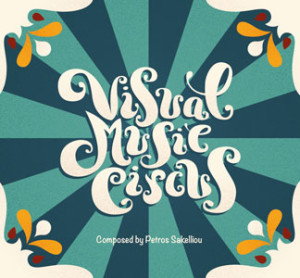 The light-gaited articulation of the pianist, Petros Sakelliou and the ineffable Magda Giannikou, playing accordion here, both match the lovely accented directives of the music. Both of them and indeed the rest of the breathtaking ensemble perfectly nail “My Choro” and the quirky “First Come First” the latter a superbly written piece that brings rhythmic brilliance into the forefront of the music. Likewise, there is an animated elegance to both parts of the “Ironic Suite”, which is powerful and dripping with sardonicism. The palindromic, inside-out phraseology is absolutely delightful. But it is the opalescent beauty of “Love for Magda and Maximus” that features some of the most profoundly beautiful moments and full of magical casements upon which the melody is hung. It is music like this that feeds the imagination. There is something absolutely balletic about this music. The leaps and pirouettes of the musicians draw you in with as much speed as do the kind of operatic reach and breadth of the histrionics that appear every so often as if to remind you that this is a work of the playful and the whimsical.

Don’t expect to be attracted to this music only because of its dramatic. There is deep meaning in almost everything that Petros Sakelliou and Magda Giannikou—the two central characters in this panoply of events—pull out of their virtuoso acts. The fun and games is woven in and out of disciplined and painstakingly-written music. And the musicians who make up the ensemble are bound to have been selected for their superb ability as sight-readers. You can almost feel them peering into the lead-sheets to get at the exact meaning of each diacritical remark. At the same time you can also sense the urgent need to let loose and have pure, unadulterated fun throughout this brilliantly imagined music. And for this and every other reason you will be, just as I was, immediately seduced by this music. What a thrill to listen to music like this, over and over again.

Petros grew up in Athens, Greece. After graduating from Architecture school (2003), and with a classical piano diploma (1998), he moved to Los Angeles were he got his Master’s Degree in Music Composition from California Institute of the Arts (2005). The following 4 years he spent in Boston working with his own group, the BandA ecLectics and attending a doctoral degree composition program in Boston University, as well as taking classes and collaborating with musicians from Berklee College of Music. Read more…