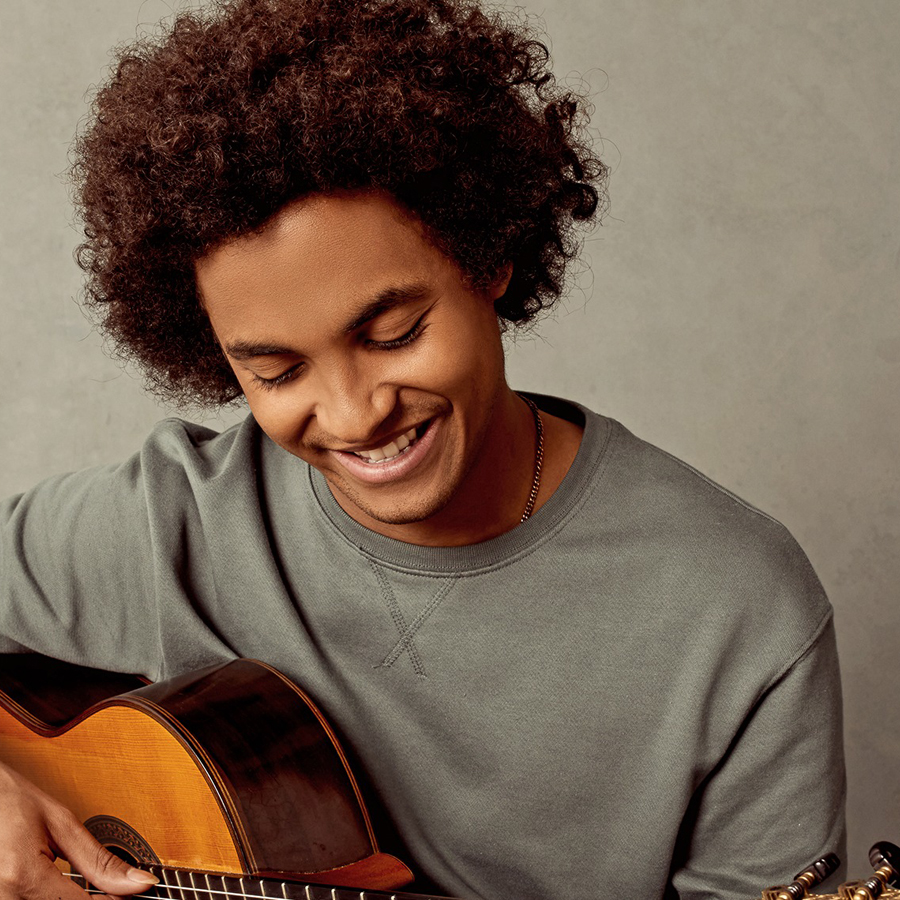 Photograph by Joseph Lynn courtesy of the artist

The brilliant young guitarist Plínio Fernandes proves once again [although he probably did not set out to do so] that well before Johann Sebastian Bach – and just as Igor Stravinsky might have said, but didn’t – the African was musically sophisticated in ways that his European counterpart would become years later. He knew, for instance, to create a curlicue of a bass line melody. He knew not just that everything was rhythm, but he also knew where to put rhythmic accents to deliver uncommon swagger, when to stab and when to ‘brush the wind’ to deliver a rhythmic whisper and when to dally over a wailing sound so it would convey elemental sadness; when to create – with a necklace of notes – a soft melodic line that sang a lullaby… and perhaps in mourning, what we might call an aria today. Everything was flesh and everything spirit, and in Africa it rolled together in the continuum of time and – raised to a rarefied realm it became music that evoked an ineffable Saudade …

Also, when one day, the African was trafficked to Brasil by colonising journeymen and religious missionaries who brought with them their breviaries, and stringed instruments, while his ward even walked to the rhythm of the cymbal and the drum his music was still of the ages… his saudade for home or heaven beyond the clouds. How else could you explain why the AFro-Brasilian – this Afro-Brasilian – Plínio Fernandes, like so many before him appears to be born with a genius for music played in the style of Baroque or Romantic or Classical, as if he were born with a lute or a guitar in his hand? How else would you explain the fact that generation after generation of Brasilian musicians play the instrument, so musically called the violão, with such uncommon facility?

The violão is to Brasil as water is to an ocean or a river; as everything is music – ocean to sky. This is why Mr Fernandes can claim his origin from all those who came before him – from Heitor Villa-Lobos, Jacob Bandolim to Pixinguinha and Egberto Gismonti ,from Luis Bonfá to Tom Jobim, Guinga to Marcus Tardelli… and, of course from Sergio, Odair and Badi Assad. There is even a case to be made for claiming descent [or at least an artistic relationship] with lutists through the ages and from Isaac Albéniz, Andrés Segovia and Paco de Lucía…  In fact you will have every reason to believe, after listening over and over to this remarkable album of music that Plínio Fernandes is an old soul; a spirit sent to interpret these works from the timeless continuum of music.

The performance of the series of works from Villa-Lobos’ Bachianas brasileiras together with the another young genius, the inimitable cellist Shekhu Kanneh-Mason, and on the performance Sergio Assad’s beautiful Menino with Braimah Kanneh-Mason [if not the apogee of the recording, then certainly the epitomé of the feeling of saudade]] seems to reinforce the truth that the African – or anyone who is descended from ancestral spirits from Africa – that music came to them from the past. They could only have attained such a degree of sophisticated and nobility from the mists of time. Their mannered playing could have only been refined in a conservatoire, but where it came to be born is a matter of belief in the mystical.

Meanwhile, back on terra firma if Mr Fernandes brings this music back to life in a manner unheard of before it is because he has technical ability beyond compare and he employs all of this judiciously, often as if by intuition rather than by design. The vocabulary of sounds and effects that Mr Fernandes brings to this instrument is staggering, often combining to make it sound like a whole ensemble. And he has wisdom in employing effects which is wise beyond his years. They range, of course, from harmonics and pizzicato to technique exotica such as nut-side, nail sizzle, or bi-tone tapping… plus a battery of percussion techniques to boot. You will hear these employed from end to end – especially on the works by Villa-Lobos.

One of the most magical moments, however, comes in Angenor de Oliveira’s O Mundo É Um Moinho, where he is joined by Maria Rita. Listening to the two artists take this music to another world, one could not help hoping that the great chanteuse would reappear on Tom Jobim’s Águas de Março – just as her mother Elis Regina did decades ago in a performance with Tom Jobim himself, which brought us to tears of joy… but that was not to be; a gem left to be polished and put on display at some later date, perhaps…